Top 7 Festivals In Czech Republic To Explore This Country’s Rich Culture In 2021! 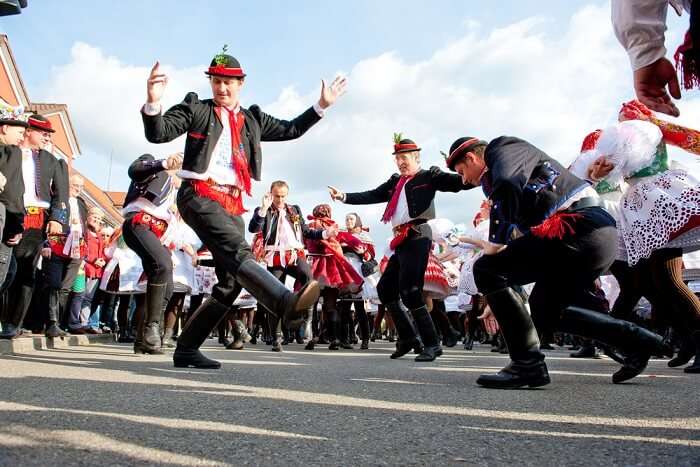 From the Rio Carnival of Brazil to Italy’s own Carnival of Venice; Spain’s paint of red in La Tomatina to the cavalcade of colors in Holi in India; festivals form a vital essence of every culture. They bring to you, the feel, the mood, the spark of any heritage. They embark identity, distinctiveness, antiquity and the oneness of a community, making them a fraternity unique. Similar is the effect of festivals in Czech Republic, 2021.

The Czech Republic, a country situated in Central Europe, is famous for its lavish castles, beers and long history. The Nation enjoys a distinctive culture. The culture of the country reflects in its array of different festal activities.

We bring you some magnificent festivities of the country from Czechia. From luscious festivals surrounding dumplings to a cultural fête for daffodils, these celebrations will inundate you all the more profoundly into the rich European culture for an incredibly authentic and memorable vacation. Czech Republic festivals and celebrations intrigue in an exciting fervor.

Image Source
Albeit numerous celebrations are sorted out throughout the entire year in the Czech Republic, summer is the busiest time, with incalculable social occasions happening all around the nation. Music celebrations are an extraordinary chance to invest your free energy and occasions by venturing out to new places, making the most of your most loved music while, obviously, being with your family, friends or making new friends. Let’s get started and acquaint you with the biggest music fiesta in the country. Colors of Ostrava is a multi-genre music festival, the prime international music fest in the Czech Republic and a grand event in Central Europe. The music celebration keeps running for four days during the second or third weekend in July. Popular global artists play here each year. Near about 100 bands take control over many stages over the celebration days, performing both inside and outside. Attendance exceeds 40,000 most of the time. Colors of Ostrava is a universal, multi-class music celebration which is organized every year in Ostrava since the year 2002. In 2012, the celebration was relocated to the hypnotizing settings of Dolní Vítkovice, one region that used to have a place with metallurgical works, mines, and ironworks. The last, 17th year, offered more than 450 programs on 21 open and secured stages – shows, exchanges, theater exhibitions, films, workshops and additionally workmanship exercises. Here is a station where bewitching, awesome music appears, making it one of the most vibrant festivals in Czech Republic 2020.

Must Read: 8 Churches In Czech Republic Showcasing The Rich Socio-Cultural History Of The Nation

Image Source
The festival, Rock for People (RFP) is one of the major open-air summer music festivals in Czech Republic 2020. The festival began in 1995 in the town Český Brod, and in 2007 it was moved to an unused airport in Hradec Králové, in the Eastern piece of Bohemia (around 1.30h from Prague).The celebration highlights Czech and global demonstrations of different types, most noticeably alternative rock, pop rock, punk rock, and EDM, and has also featured many workshops as well as leisure activities. For admirers of rock genre and heavy metal genre, Rock for People is a heaven of music.The July celebration takes place in a timeworn abandoned airport in Hradec Králové and pulls in universal stars. Child and dog-friendly, this is a four-day long celebration that has been celebrated every year since 1995. A solitary ticket enables you to passage to all occasions, such as geocaching, addresses and notwithstanding cycling occasions, and shows, and gigs, and one can add a camping ticket to the mix, thereby, seizing a place to relax.

Suggested Read: 8 Water Parks In Czech Republic That Will Turn You Into A Child All Over Again!

Image Source
Karlovy Vary International Film Festival is another established film celebration on the planet. Celebrated in July, it attracts well-known international stars, with Robert De Niro, Richard Gere and Annette Bening showing up there at some time.Rita Hayworth was the visitor of respect at the specific first celebration in 1946. It has been organized since decades and is Central and Eastern Europe’s most prominent film event. The core of the celebration is a component a feature film competition, but there also competitions for best documentary, lectures, an award gala, and seminars. There is a popular midnight screening of new in addition to classic horror films. Only the films which have not been displayed in competition at other international fests can be incorporated, this is in accordance with FIAPF rules. The program features distribution pre-premiers as well as films that were awarded in other fests. For the tenth respective year, the festival is going to award Variety Critics' Choice.

Image Source
This is the quintessential fiesta for literary lovers, a two-month-long festival of ostensibly the best dramatist who at any point lived, William Shakespeare. From June until September, Prague Castle is home to a progression of exhibitions which occur in the staggering Burgrave Palace courtyard. Summer Shakespeare Festival is the most established and greatest outdoors celebration in Europe displaying works by William Shakespeare. Plays performed solely for this festival are showcased in Slovak and Czech. It is set up in the enclosure of Bratislava castle.The Festival was begun by President Václav Havel when he allowed the Prague Castle to enter for artists in the mid-1990s with an end goal to appeal to the local public. The celebration has been held routinely since 2000.Summer Shakespeare festival relishes extensive fame and there is an overwhelming demand for tickets. There are a record number of audiences attending close to 10,000 each season, its total standard replicated in the positive appreciative response from media. About 30 dramas are organized within a mid-year in an outside assembly room with 300 to 500 seating capacity. Plays organized mainly for the Fest are exhibited in Slovak and in some cases in Czech. The celebration takes place on the patio of the Bratislava palace.

Suggested Read: 12 Romantic Places In Czech Republic You Must Visit With Your Loved One

Image Source
This Festival is essentially two events; the first one is called Posviceni, spiritual merriment where tribute is offered to God for providing a fruitful harvest. The other one is called Obzinky, held straight post the harvest is over. Farm-workers and land-owners along with Czech locals and tourists gather for a feast.A pleasant nation with vineyards, distinctive cellars with well-disposed administration and typical Czech wine assortments, which incorporate, for instance, the intensely floral Cabernet Moravia, the ruby shaded Lemberg, sweet-smelling Pálava from Moravia or the Neronet with indications of dark currant and cherry, developed in Bohemia. This charms numerous admirers of wine. Wine-developing has a long convention here. One can savor wines chiefly from Southern Moravia, in spite of the fact that Prague, Litoměřice, and Mělník likewise have their own creation.

Image Source
Prague Spring is a huge music event held under the support of the President of the Czech Republic, in a relationship with the Ministry of Culture of the Czech Republic. Exceptional artists, orchestra symphonies and chamber music groups have been performing at Prague Spring since 1946. Prague Spring is an enduring exhibition for performing artists, symphony orchestras along with chamber music ensembles around the globe. The Municipal Hall (Smetana Hall) in Prague, Czech Republic, fills in as one of the primary scenes in the yearly Prague Spring Festival.The festival takes place on 12 May, since the year 1952, on the death anniversary of Bedrich Smetana. Begins with his cycle of symphonic poems Ma vlast (My Country), and closes with Ludwig van Beethoven’s Symphony No. 9. Prague Spring's customary scene is the Rudolfinum show corridor; an admired Neo-renaissance working with a great amphitheater arranged on the bank of Vltava River. The Prague Spring has a specific concentration in supporting more youthful entertainers. The Prague Spring Competition was built up only a year post to the celebration itself and is held every year in different instrumental sections. For each one of the individuals who need to go to Prague Spring – tickets are marked down on the web. They are accessible by means of Ticketpro or in Prague's Rudolfinum.

Image Source
The Fringe Festival, which begins in later part of May, stretching out into the principal seven day stretch of the month of June, conveys a blend of Trial Theater to the avenues of Prague. It is still young in comparison to other different festivities in Prague; Fringe at the moment offers 45 varieties of shows, in 8 venues, showing different cultural presentations of various kinds, such as comedy, alternative theatre, dance presentations, etc.From the time when it began, 2002, the Fringe has developed in both size and ubiquity. From a group of people of just 400 individuals in the primary year, the occasion presently pulls in around 6000 sharp and satisfied attendees every year - everything being equal and from all strolls of life.The eighteenth Prague Fringe happens from 24th May to first June 2019. An exciting blend of theater, parody, music, move, narrating and great occasions at settings over the Malá Strana region of Prague - the yearly Fringe Festival event is an affair you will never forget.Prague Fringe is a nine-day celebration exhibiting crafts by many artists from everywhere throughout the globe in a traditional, and some not so traditional scenes in the recorded focus of one of the world's most delightful urban communities.Every year more than 200 exhibitions of around 40 distinct shows are on offer, running from late evening into the night. The Fringe Club - the gathering point for crowd individuals, entertainers and celebration staff - proceeds into the early hours for the individuals who have the energy.


Q. When will the Karlovy Vary International Film Festival takes place in the Czech Republic?

A. In the year 2021, the Karlovy Vary International Film Festival will take place in the month of July from 3rd to 11th.


Q. Which is the most popular music festival in the Czech Republic?


A. There are two extremely popular music festivals in the Czech Republic that appeal to the crowds. The first one is Ostrava and the second one is the Rock For People music festival.


Q. What is the Summer Shakespeare Festival?

A. Summer Shakespeare Festival is a festival that is dedicated to the literature. A happy moment for literary lovers, this festival exhibits fine theatre performances and is set up in the Bratislava castle.


Q. How is Harvest Festival celebrated?

A. The harvest festival is one of the most loved festivals in Czech and is essentially two events- Prosviceni and Obzinky. On this festival farmers and landowners, locals and tourists gather together to devour a delicious feast and relish the local Czech wine.


Q. What is the best time to visit the Czech Republic?


A. The best time to visit the Czech Republic is either during the spring season or during the winter season. Months from March to May and September to November are considered the best months.