Gokyo Ri Trek: A Pocket Guide To This Majestic Peak In Nepal 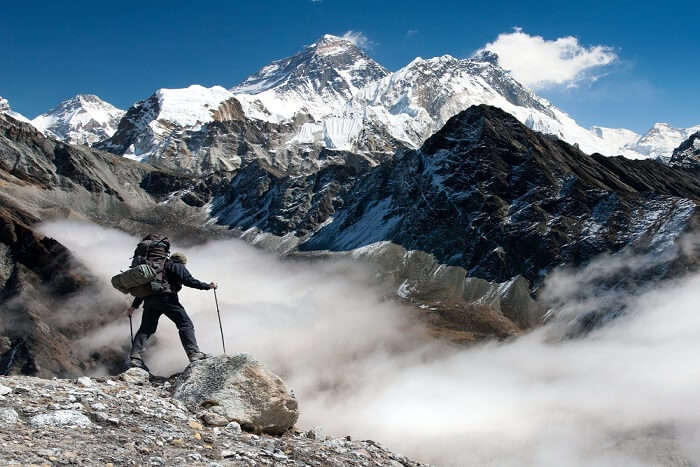 Gokyo Ri Trek is one of the most fabulous treks in the Everest region. Today we are going to discuss the Gokyo Ri Trek and how adventurous is this one!

Gokyo Ri is situated in Nepal. The Gokyo Ri Trek in Nepal was once considered to be the best place for getting a view in the Everest ranges. Gokyo Ri (5483) is the perfect alternative of Everest Base Camp Trek. It offers a great view of the Gokyo lakes. Other than the four highest mountains namely Lhotse (8501 m), Cho Oyu (8153 m), Everest (8850 m) and Makalu (8475 m), there are many other mountains which are visible from Gokyo Ri on a clear day.

The views of Gokyo Ri, its treks and also its lakes are the things which make this trekking camp unique. The trip of Gokyo Ri Trek is of 14 days. This trip of 14 days begins from Kathmandu where the tourists are made to visit various heritage sites. This trek of Gokyo Ri and its lakes is an excellent alternative to the classic trekking camps of Everest and Kanchenjunga. This Gokyo Ri Trek and the Gokyo lakes are for those people who are interested in walking in the region of Everest without thinking about reaching towards the base camp of Everest. The people who are interested in going for trekking in the world’s most extensive mountain range which is Everest should opt for Everest Base Camp Trek which is a trek of 16 days. For the people who want to climb the high mountain passes in Everest have one more option which is Everest High Passes Trek which is a trek of 20 days.
The Gokyo Ri Everest Base Camp Trek is better than Everest Base Camp because the views from Gokyo Ri trail are much better than the views from the path of Everest Base Camp. And another reason is that it is less crowded in Gokyo Ri Trek than the Everest Base Camp.

The best time for Gokyo Ri Trek is during Spring season (March-May) and Autumn season (September-November). The sky is clear during these months due to which the views are fantastic. A person should see to it that it is not raining in the area of trekking. The fun of trekking is ruined due to rains, and even the safety is compromised. During the spring season, a person would get to enjoy the lush vegetation of Gokyo Ri especially in the trail regions at lower altitudes.

Must Read: Paragliding In Kathmandu: 8 Best Places To Get The Perfect Bird’s-Eye View Of The Landscape

One could go sightseeing to explore attractions in Kathmandu which include Boudhanath stupa, Kathmandu Darbar square, Swayambhunath stupa, and Pashupatinath Temple.
There is a spectacular flight to the Tenzing Hillary Airport which is in the listed amog the world’s most adventurous airports. One could get a chance to see the Gokyo Ri’s largest glacier and also Namche Bazar. A person gets to visit Gokyo Lakes which are freshwater lakes at the highest elevation from 4700-5000m in which the water flows from various glaciers and streams.

Suggested Read: 10 Villas In Kathmandu For Travelers Who Want To Experience A Luxury Stay On A Shoestring Budget!

What To Pack For Gokyo Ri Trek

Image Source
Here is a list of things that you must carry on your trek in order to make it hassle-free even though you might not need all of these at once, it is still suggested to have everything you might need later.
Passport with validity of at least six months

Suggested Read: 10 Places To Visit In Kathmandu To Explore The Art And Culture Of This Ancient City

Gokyo Ri Trek is located in Nepal, but the trek begins from Kathmandu. The journey starts from Lukla (2828 m) and then it is followed by Dudh Koshi valley which has to be climbed upto Namche in the Sherpa capital. Then the trek is taken towards Tengboche Monastery (3867 m), and this monastery is surrounded by forest area. It is one of the most significant monasteries in the whole Khumbu area. The view of Everest from this monastery is spectacular. The best view is obtained in the morning. Everest (8848 m), Amadablam, Nuptse, Lhotse, and many other mountains are visible from the ridge of Tengboche Monastery. Sherpa considers this monastery as a spiritual place, and there are more than 40 Tibetan Buddhist monks who reside in here. The trek then passes through forests and birches where sometimes musk deer are visible. Gokyo lakes are reached after passing a few yak-grazing areas. Ngozumpa Glacier is the largest glacier of Nepal.
The route of the trek is starting from Lukla (2860 m), and it then moves towards Phakding (2610 m) until it reaches Namche Bazar (3440 m). Later on, the direction of the trek is changed to West through Dole (4038 m) towards Machhermo (4470 m). Then it leads to Gokyo (4750 m). The trek is passed to Phorste Thanga (3680 m), Namche Bazar (3440 m) then to Monjo (2835 m). Then the trek returns to Lukla (2840 m) and the back to Kathmandu (1300 m).

Suggested Read: 10 Places To Visit In Kathmandu To Explore The Art And Culture Of This Ancient City

Image Source
The trekking of Gokyo Ri and Gokyo lakes is an average trekking camp. It is necessary to have a physical fitness level to trek for at least 5-6 hours daily. Gokyo Ri Trek is very easy for the people who are used to strolling higher elevations. A person who wishes to go for a trek should start running and exercising before two months so that there is no Gokyo Ri Trek difficulty. People should exercise for hearts and lungs on average so that it works as an advantage in the Gokyo valley trekking.

So what are you guys waiting for? If trek is on your mind, Gokyo Ri Trek should be on your cards soon! Till then, Happy Planning Peeps! Book your trip to Nepal for a rejuvenating experience with your folks and unwind in the scenic beauty around!