Greenland Nightlife: 4 Places To Have The Time Of The Night! 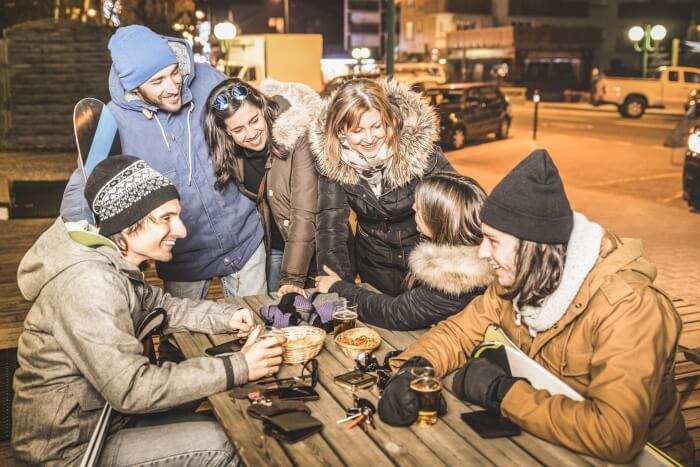 Expecting a party environment in Greenland similar to New York or Ibiza is unrealistic. However, the Greenlanders get together in summers and party hard to celebrate the rising of the sun and their National Day. With most of the population settled in the capital city of Nuuk, the Greenland nightlife is mainly focused around this region. Planning to visit Greenland this summer season? Get a break from the laborious hike and kayaking and be a part of the country’s party circuit. This column covers everything one needs to know about the Greenland nightlife.

Greenland is also famous for sweet pastries and cakes which are regularly consumed with a cup of Greenlandic coffee. You can try them at the following places:

Known to be the oldest brewery in the country, Godthaab Bryghus was established in Greenland in the early 2000s. This largest brewpub in Nuuk is known for its famous Baja and Pullarkat beers and the best nightlife in Greenland it provides. The brewpub is a modern establishment with soft music playing in the background and is suitable for families. The pub serves some of the rarest meat dishes such as caribou and crocodile meat. The pub even crafts a few speciality beers that last only for a few days in the summer months.

Must Read: Scuba Diving In Malta: Discover The Underwater Secrets Of The Blue-Green Mediterranean Sea

Nightlife in Nuuk, Greenland starts around midnight especially in the most happening club of the country, the Manhattan Nightclub. The nightclub has a large dance floor and two cocktail bars. Professional bartenders work in the premises and some of the best DJs in the country perform in the summer circuit parties. All the latest international and local numbers are played in the club where one can find themselves grooving to the music in a jam-packed dance floor.

One of the coolest places to hang out with friends in Nuuk is the Daddy’s. It is known for its exquisite beer range and a pool table. The ambience of the place is very rustic with dart boards hanging on the walls and blaring music. The cocktails are quite famous in this Greenland nightclub and the place is cheaper than the other famous nightclubs in Nuuk. The bar serves typical pub food with loads of potatoes and heavy cut meats.

Skyline Bar is one of the fanciest nightlife in Nuuk, Greenland. The ambience of the bar is colourfully filled with neon lights on reflecting backgrounds. The bar plays the best music and even manages to have a live piano performance every night. It is located in the Hans Edge Hotel and follows a strict dress code of smart casuals. The food in this bar is pleasing and worth the money. One should also try the different cocktail mixes the bar has to offer.

Other Nightime Experiences In Greenland

Greenland is known for the mesmerising Northern Lights that appear in its dark blue skies during winters. These lights appear in September and stay on until April. The ice sheets in the winters reflect the moonlight and brighten up the surroundings allowing people to enjoy the nature’s beauty all through the night. Who said the best nightlife in Greenland was limited to the overcrowded bars? One can find many locals and tourists enjoying their night under the clear skies watching the Northern Lights dance and producing artistic streaks in the sky.

Suggested Read: 10 Spots For Scuba Diving In Christchurch That’ll Pamper All The Divers!

One of the most sensational experiences one gets to live in Greenland is the concept of Midnight Sun. Once the sun rises in the summers, it stays on until the autumn season approaches. This leads to a unique phenomenon where one can revel in the sunshine even when the clock strikes 12 in the night. People can be seen basking in the sun and enjoying family day outs even in the middle of the night. This is an uncommon nightlife experience one can experience only in Greenland.

Looking for an adventurous activity to do at night? Ditch the Greenland nightclubs and get on a midnight cruise in summers. Ilulissat is a notable site known for its huge monolithic icefjords. During the summer season, one can set sail in the glacial waters and watch the fascinating icebergs and ice caps float around due to partial meltdown. Midnight cruises are arranged for tourists in this season where one can even encounter different species of whales and other mammals such as walruses and polar bears. The sunrays reflect on the ice boulders and emit a bluish tinge to the surroundings which is a sight to behold.

Nightlife doesn't have to limit to pubs and restaurants in Greenland as most of the people are out in the night enjoying what nature has to offer. Dog-sledding is an out of world experience that is sure to give one a lot of memories to take back home. Technically, as manoeuvering the pack of wild dogs require skill and experience, it is best left to the locals who know every nook and corner of the ice desert. Since Greenland lacks road connectivity between its towns and villages, dog-sledding is the most dependable modes of transport the locals bet on. Make sure to befriend one of the locals and coax them to a ride in the night under the magical lights and capture a lifetime memory.

Suggested Read: Scuba Diving In Colombo: 10 Places For Witnessing The Beauty Of Marine Life Like Never Before

Food And Drinks In Greenland

Owing to its position in the far north of the world map, Greenland has been a victim of isolation when it comes to trading or exports and imports. The concept of alcohol entered the country in the late 1900s rising the level of consumption every year. Since then Greenland has turned to manufacturing its own brews and today the country is famous for its beer. The country even obtained a license recently to export their craft beers and now they can be found in many supermarkets across Europe. The availability of limited vegetation in the country has led to the consumption of rare meats such as crocodiles, caribou, whale etc.

How To Reach Greenland?

Greenland has only two ways of commuting in and out of the country. It has 5 major airports where international flights ply twice every day. Air Greenland and Air Iceland are the two major airlines that enter the country. One can reach either Denmark, Iceland or Canada from any part of the world and then get onto the connecting Air Greenland or Air Iceland flights to reach Greenland. The other option is to get on a cruise from either North America or Europe and cross the Arctic and the Atlantic Oceans to reach Greenland.

Greenland nightlife may not be how one imagined it to be but is definitely a must have experience. Bored of the overflowing crowd of a nightclub back home? Head to Greenland to enjoy the unusual experiences. Plan your trip to Greenland with TravelTriangle and capture the scenic nightlife of the Scandinavian country.

Nightlife In Andaman: 6 Phenomenal Ideas To Enliven Your Vacay In 2021!