8 Best Helicopter Rides Around the World for Enthralling Experiences 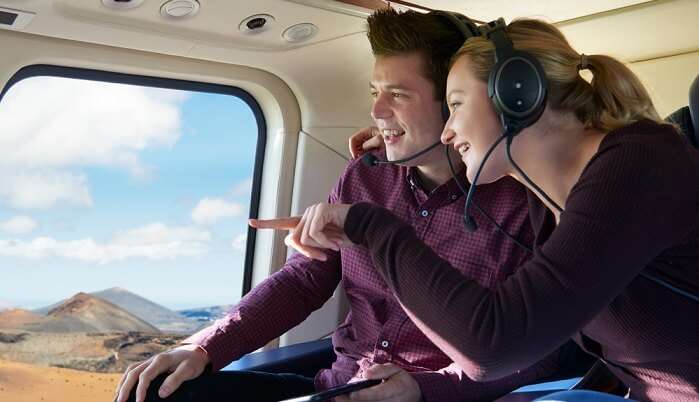 Helicopter rides are the perfect ways to explore places. You capture spectacular glimpses of your favourite urban hub or wilderness. It might be an expensive affair, but that’s worth the splurge. Being a great way to view aerial vistas, helicopter tours are something you never regret doing on vacation. Whether planning a getaway with your friend or searching for a romantic way to impress your special one, a helicopter ride will never disappoint you. Continue reading to know the best helicopter rides around the world.

Top 8 Helicopter Rides Around the World

Apart from providing unique views, helicopter rides are amongst the most thrilling activities to indulge. They also take you to remote regions and are the quickest way to commute to some offbeat places. The following are the best helicopter experiences around the world:

The vast terrains of the Grand Canyon in Arizona are worth exploring on a helicopter ride. Spread across 18 miles in width and around a mile deep, the spectacular aerial views of the canyon give you a broader understanding of these natural formations. If you wish to watch the ultimate colorful formations of the Grand Canyon, then it can only be done by air. This tour also gives glimpses of the Colorado River and its tributaries cutting their ways through the canyon. A Grand Canyon helicopter ride also includes passing over nearby areas, especially Las Vegas and Lake Mead. This is amongst the best places for helicopter rides.

Best time for helicopter rides: Throughout the year, try going for an early morning ride.

A Zip Line 1,000 Feet Above The Grand Canyon

Capturing aerial views of the ‘City that Never Sleeps’ is an exciting experience, as the city is home to enormous skyscrapers, and one feels like traversing through concrete tunnels on a helicopter ride. Going on such expeditions is amongst the best things to do in New York City. These rides include iconic landmarks, such as the Statue of Liberty, the Empire State Building, Ellis Island, the Washington Bridge, and more.

Best time for helicopter rides: Throughout the year, between 1 pm to 3 pm is the ideal time as the sun is on the top and won’t obstruct you from clicking perfect pictures.

Brazil, the spectacular home to the Amazon rainforest and tropical beaches, features numerous helicopter rides. Out of all the aerial excursions, the Rio de Janeiro helicopter ride is quite popular among tourists. This second-largest city in Brazil hosts helicopter tours that take you to catch bird-eye views of the sprawling metropolis along with a glimpse of Sugar Loaf Mountain, the famous statue of Christ the Redeemer, the Copacabana, Ipanema Beaches, and Maracana Stadium.

Best time for helicopter rides: Throughout the year, and you can plan a ride during sunrise or sunset as the vistas get magical.

Hawaii, popularly known as ‘The Big Island’ of the United States, is located in the Pacific Ocean and its enormous landscapes are worth exploring on a helicopter ride. This gorgeous island offers a variety of helicopter tours, and apart from spectating the lush green terrains, and stunning coastlines, you can also hover over lava flows and spewing volcanoes. The prime attractions included in Hawaii helicopter rides are Keehi Lagoons, Sacred Falls, Kauai, and Hanauma Bay. If you are staying in Hawaii and wish to go to the island of Kauai, then a helicopter ride is the quickest and most popular way to transfer. This is one of the famous places for helicopter tours.

Best time for helicopter rides: Throughout the year, try riding during late morning or early in the afternoon as you will witness limited shadows and more vibrant colours with the sun on top.

Iguazu Falls, located on the border of the Argentine province of Misiones and the Brazilian state of Paraná, is another famous place for helicopter rides across the world. This group of 275 smaller waterfalls, when combined, forms the largest waterfall in the world. Spread over an area of 1.7 miles, the best way to explore Iguazu Falls is via a helicopter ride. The tour showcases bird’s eye views of the verdant jungle, followed by the entire area of the Devils’ Throat and finally the famed waterfall.

Best time for helicopter rides: July to October, February to April, it is advised to check the weather forecast before planning your ride.

Iguazu National Park: A Heaven Which Lies On The Border Of Argentina, Brazil, & Paraguay

If you think that rotating cable cars offer the best view of the lively port city, Cape Town, then you must surely go on a helicopter tour. The ride features aerial glimpses of the Indian Ocean and the Atlantic Ocean and zips through the Twelve Apostles mountain range and Table Mountain. The rider also captures mesmerizing views of Muizenberg Beach and gets a chance to spot great white sharks.

Best time for helicopter rides: Throughout the year during sunrise and sunset

Victoria Waterfall, nestled between the borders of Zambia and Zimbabwe in Africa, is home to unparalleled vistas. It has a width of 1,708 m which makes it one of the largest waterfalls in the world. The majestic heights of these 354 feet tall waterfalls are worth exploring on a helicopter ride. The only way to witness this magnificent site is by air, and you will also be spotting the famous wildlife of Africa on this tour. This is one of the world’s best places for helicopter rides.

Best time for helicopter rides: Throughout the year during sunrise and sunset

Zambezi River Guide: All About Your Next Soothing Trip In Africa!

Mt. Everest Base Camp in Nepal can be visited even by those who have no plans of trekking. Everest Base Camp helicopter ride is the easiest way to witness the majestic heights of the world’s tallest mountain. This ride goes through the widespread Himalayan ranges and lands at the Everest Base Camp. The base is at an altitude of 17,598 feet above sea level.

Best time for helicopter rides: Between late September to November and February to May. Try riding during sunrise as the views are truly dramatical.

A blend of thrill and excitement always makes a trip memorable, and a helicopter ride is one such addition that adds true adventure and exclusive sightseeing to your itinerary. If you wish to go on the best helicopter rides around the world, then you can plan your upcoming trips with TravelTriangle and have an enthralling experience.

Frequently Asked Questions About Best Helicopter Rides Around The World

How much do helicopter rides usually cost?

Is a helicopter ride worth it?

Helicopter rides are truly worth the money. The experiences catered on such rides is popularly known as Heliventures as you witness rare sights and gather broader understandings of the terrains over which you are planning to hover. This is a rare activity to indulge in over a vacation.

Is it safe to go on a helicopter ride during Covid times?

As travel has opened up, helicopter tours are alluring travelers and wanderers. However, make sure that you follow all the safety precautions mentioned by the authorities. Remain masked on your excursion and make sure that the tour provider is maintaining proper hygiene.

Why are helicopter rides so expensive?

Helicopters require more fuel than a similar sized airplane, and hence the prices are higher as compared to fixed-wing airplanes of the same size. The operational cost per hour of a helicopter is higher, however, the experience is unmatchable.

Scuba Diving In Pondicherry: A Handy Guide To Experience This Adventurous Activity In 2022