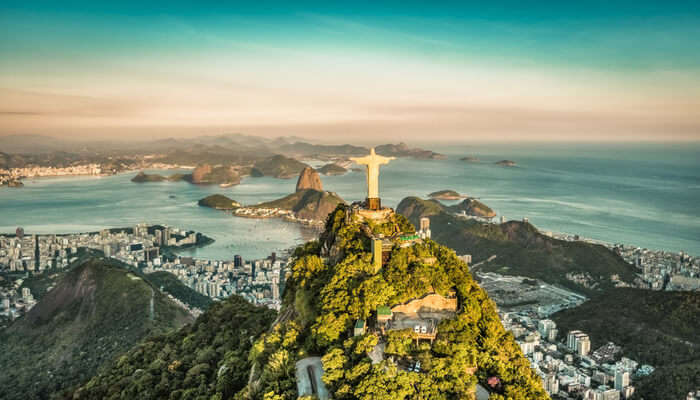 Rio De Janeiro, the 3rd most populous state of Brazil, is famous for its natural settings, Samba, the Carnival, Balneario beaches, and Bossa Nova. Whether you are a first timer here or are coming for the 10th time, Rio’s delightful neighborhoods and hip vibe will put you in a trance and won’t let you leave! From tumbling down for meeting the natural dramatic bay to gliding over forest-covered peaks of the concrete jungle, there are countless things to do in Rio de Janeiro for making the most of your stay in Brazil.

8 Top Things To Do In Rio De Janeiro

The city of contrasts has a lot to offer, be it spectacular coastlines, splendid monuments, or favela societies. Rio de Janeiro has got the attention of the world and if you wish to make the most of your time here, try out these 8 exceptional things to do in this beautiful place.

Marvelous at any time of the day, make sure to be there during sunset as there is something mystical about it that will leave you spellbound as at that very point, city lights glimmer into life. When it comes to indulging into some simple yet exceptional Things to do in Rio de Janeiro, enjoying the view from this mountain comes on the top of the list. Surrounded by the ocean, you can reach Sugarloaf Mountain only by rock climbing, if you are experienced and brave, or cable car. The sensational views displaying the panoramic lookout over the ocean and the city will give you a feeling of serenity.

Must Read: Time To Pack Our Bags As Indians No Longer Need Visas To Travel To Brazil

2. Mercado Popular – Shop Your Heart Out

Are you a shopaholic? Then you are going to love the idea of getting the best deals at the Mercado Popular as it is the best way of spending your afternoon in the city. The vendors from Copacabana and Ipanema buy their wares at this place so you can ensure the fact that you will get your hands on the best deal. Regarded among Top 10 things to do in Rio de Janeiro, you will enjoy purchasing items from flip-flop and Haviana shops everywhere. This huge covered market has an extensive range of electronic, phone, and clothing etc., at a competitive price.

Suggested Read: 10 Brazilian Desserts To Satiate Your Taste Buds In This South American Wonderland In 2021

3. Christ The Redeemer – Gape At Its Beauty

There is a reason why Christ the Redeemer has become synonymous with Brazil as this well-known statue of Jesus Christ stands as the cultural and religious symbol of the welcoming and warm nature of Brazilians. Being identified as one of the 7 wonders of the World, this monument royally overlooks the city from the Corcovado Mountain’s summit which is the 700-meter-tall peak. You can reach the top by train, van, or hiking and enjoy the scene of one of the most magnificent viewpoints in the city.

Location: Parque Nacional da Tijuca – Alto da Boa Vista
Best Time to visit: Early in the morning before 8:30 AM or in the late afternoon after 3:30 PM.

Suggested Read: 6 Cruises In Brazil Which Will Give You A Holiday To Remember!

Amazing hikes are one of the best and free things to do in Rio de Janeiro as there is no shortage of the same so that you can enjoy striking views. In case you don’t have much time, make it a point that you go for a hike up the Dois Irmaos i.e., 2 Brothers Peak. Begin the hike at Vidigal favela’s top, known as one of Rio’s secure communities. For reaching out there, take a van or moto-taxi at Vidigal’s entrance to drive through busy, twisting favela roads up to the top. Then, it will take you an hour of hiking through vegetation and forest.

5. Pedro da Sal – Groove To The Beats Of Samba

Called Samba’s birthplace, Pedro da Sal homes one of the city’s most conventional modified Samba nights, as well as is the most suitable way for experiencing the city’s nightlife and musical culture like the locals. If you are looking for exciting things to do in Rio de Janeiro at night, then make sure to listen to the groups of the samba bands join together for dancing and singing the night away on Monday nights at this religious and historical sight. Since the area was once the slave trade’s main point, now it is also regarded as the cultural heritage site.

Location: In the neighborhood of Saude
Best Time to visit: After around 7 PM

This jolly neighborhood ignites when the sun goes down where the locals sip on their delicious cocktails. Visiting this place during your tour to Rio de Janeiro is a must as the once rundown region has now turned out to be the flourishing nightlife spot and maintains the edgy vibe. Brimming with the rows of clubs, venues for live music, and tapas bars, the alluring night crawl at this place has a lot of charm and excitement. Head out to Clube Dos Democraticos and Lapa 40 Graus that has been the house to Brazilian dancing and music since 1867. You will wish to go to the Rio Scenarium, the most well-known club featuring vintage decor, the long list of the craft cocktails, and 3 stories.

Suggested Read: 6 Most Haunted Places In Brazil To Have A Bone-Chilling Experience In 2021!

Chilean Artist named Escadaria Selaron began laying colorful tiles on ramshackle steps which ran in front of his house until he died in 2013 which have now turned into a masterpiece. Ascending these steps is certainly one of the most fun things to do in Rio de Janeiro às you will be able to see over 2000 tiles from over 60 countries from across the world. They are a work of art that is enlivened by the passionate artist. These steps start in Lapa, along with with each one of them cautiously decorated with bright patterns, as well as the lead up to the Santa Teresa. Visitors can climb these 215 steps while admiring the beauty along the way as well.

Brazil’s intense repute for football is one of a kind and that is why visiting Maracana stadium should be on your list of things to do in Rio de Janeiro. For experiencing football like the Brazilian, go to Maracana, known as the largest football stadium in the country. The host of the 2014 FIFA World Cup’s final game as well as also the main stage for several of the 2016 Olympic Games, Maracana is an incredible place to visit in Brazil. Though the tours around the stadium are not operating right now, there is a better way for experiencing it by heading out there on the match day as well as checking out the game between the rival football teams of Rio.

There are so many things to do in Rio de Janeiro that once you visit this mesmerizing place, you won’t want to miss out on anything. Simply intoxicating, its abundance of hotels, nightlife, national monuments, and the museum is the major reason behind its popularity among plenty of local as well as international tourists. So, if you are thinking of taking a vacay soon, you should definitely go to Brazil!

Frequently Asked Questions About Things To Do In Rio De Janeiro

Q. Is Rio safe for tourists?

A. Don’t avoid visiting Rio de Janeiro during the Carnivale. However you should also make wise decisions about which activities you are engaged in while being there as well as where you stay.

Q. Is there Uber in Rio de Janeiro?

A. Yes, you can avail of the services of Uber in Rio de Janeiro as it is considered more reliable than taxis.

Q. What is the best month to visit Rio de Janeiro?

A. The best month for visiting Rio de Janeiro is between December and March as the weather during this time is warm and pleasant enough for hitting the beaches. The best time to see the Carnival is February.

Vietnam Shopping: 21 Places For Shopaholics Fancying An Astounding Experience In 2021