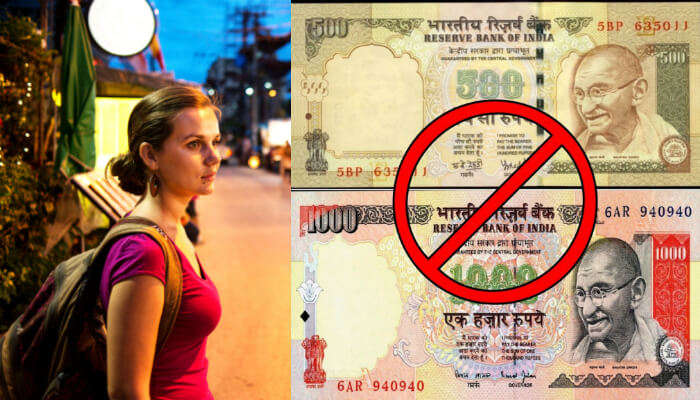 All currency denominations of INR 500 & INR 1000 ceased to be legal tenders, effective 9th November 2016. Following the surprise move by the Ministry of Finance & RBI, Honorable Prime Minister Narendra Modi announced that the currently floating Rs 500 & Rs 1000 notes will be replaced by new currency bills of INR 500 & INR 2000. The bold step that has been taken to fight the problem of black money, counterfeit currency, and corruption will also accelerate the move to a cashless economy.

The foreigners coming to India during the 50-day period or those who are already touring the nation are likely to face the following problem of currency.

With the new currency bills coming into the market, it is only safe to be apprehensive of the supply of money. To begin with, there will be a problem of exchanging their home currency into higher denominations of Indian currency during the entire period. For those who already have the older bills of INR 500 & INR 1000, the exchange will be all the more troublesome. And let us not ignore the impact of bank closures that will prevent them from exchanging older bills altogether.

And we are not just talking about the basic expenses of food, local travel, and shopping. In case the foreigner hasn’t already paid for hotels and sightseeing packages, the travel woes are more likely to increase.

The online respite that is offered to the inbound travelers is the acceptance of old bills for air and railway tickets until 11th November, in addition to the exceptions mentioned already.

For those considering to travel abroad from India before 30th December 2016, the following travel problems may be present:

a. Currency
Most travelers find it convenient to exchange cash to cash on forex markets. But with the limit on withdrawal and the demonetization of previously existing INR 500 & INR 1000 notes, the exchange would be difficult. Of course there are credit/debit cards and forex cards.

And in case the destination chosen is a little offbeat with lesser facilities of onsite exchanges and ATMs, the problem is surely going to increase manifolds.

b. Bookings
Things might not work out for those who have been planning to book foreign packages through local agents on cash payment basis. But it is going to be a much smoother ride for those who plan on booking international tour packages online.

c. Flights and VISA
Until 11th November, the old currency bills might be accepted for flight bookings. But those planning on booking flights and obtaining tourist VISA through local agents on cash payment basis are sure to face problems in these days to come.

d. Shopping
Shopping in foreign destination would need cash, especially at the street side vendors selling souvenirs. This brings us back to the question of cash woes for the outbound travelers.

The Indians who are already traveling in India or those who intend to go on a holiday to an Indian destination during 9th November – 30th December 2016 might come across the following travel issues:

a. Bookings
With the current demonetization, problems will continue to persist for those who have been looking to buy packages from local agents and pay through cash. The same can be avoided by booking Indian holiday packages online.

b. Payments
Those who are currently on tour will find it very difficult to pay in cash with the 2-day bank & ATM unavailability. And in offbeat destinations like Kasol, where there are no ATMs altogether, it is going to be really tough. We suggest you to pay online as much as possible or carry cash in lower denominations.

To conclude safely, the step aimed to curb black money and corruption may pose some worries for the travelers. But the paperless transactions and efficient planning can eliminate these travel woes.

But before we take your leave, we present to you a summary of the event that shook the nation.

Note: Following the news of demonetization, DMRC announced on 9th November that it will also accept old currency bills.

Regarding the exchange of old currency notes:

Note: For further information, check the FAQ section of RBI.

The new INR 500 note that will be issued

The new INR 2000 note that will be issued

As the nation fights the problem of black money and corruption, only time will tell about the impact of these measures. Until then, good luck and bon voyage!

Further Read: If These Mind Blowing Facts Don’t Make You Feel Proud To Be An Indian, Nothing Will!

Trekking In Uttarakhand 2021: The 22 Greatest Treks That Will Leave You Mesmerized!

23 Places To Visit In Arunachal Pradesh: Explore This Unexplored And Underrated Gem In 2021