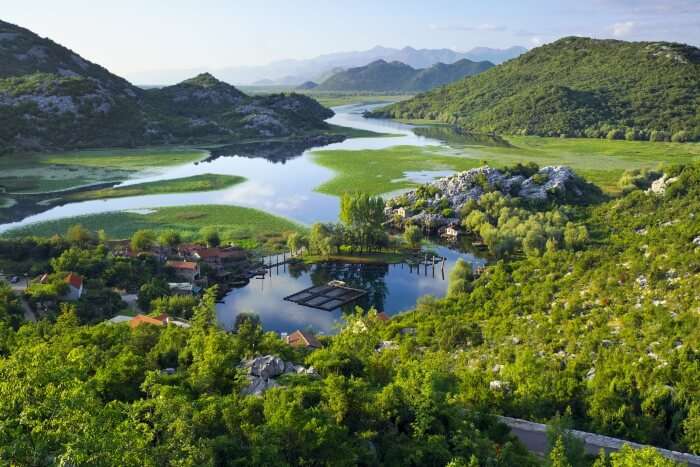 The beauty of Montenegro is enhanced by its jewels, the lakes in Montenegro. You may walk long distances along with your beloved during mornings along the coast of the Adriatic sea, can have some family time during lunch at the banks of Skadar Lake. And if you are the one who wants to experience thrills and adventure then you can surely spend your evening hiking on the beautiful mountains too. It’s truly a worthy destination to visit and spend time taking a break from long hectic daily schedules. Montenegro is one of those European countries which is admired for its beauty as well as historical importance.

Montenegro’s historical importance is one of the reasons why it is not wrong to include it in the top 10 world tourist destinations. So here are the seven lakes one should explore when here.

Image Source
The Biogradaska Gora National park holds one of the true beauties of nature, the Lake Biograd surrounded on all its sides by the virgin forests. 1094 meters above sea level having crystal clear water with a length stretching for about 1100 meters, the width of 410 meters and depth of circa 4.5 meters which makes it suitable for boating and sightseeing and also the largest glacier lake of the national park makes it one of the must-visit places for the tourists. Hiking tours leading through beautiful landscapes and surrounding mountains which reflect emerald color on the lake’s surface is truly a treat for the eyes.

Must Read: 10 Hostels In Montenegro To Enjoy The Delights Of The Adriatic Sea And The Balkan Highlands

Image Source
Situated in the Durmitor National Park, the black lake in Montenegro stretches for about 5 km but within this small area, it covers so many photo shops and picnic spots that it becomes a whole day long journey exploring the beauties of this emerald green lake and dense forests along with snow-capped mountains. There are benches placed after regular intervals for the visitors to sit and enjoy the singing of these birds and the view of ducks gathering along the banks of the lake and cows nibbling on the long grass. Black lake among Montenegro lakes surely satisfies those who are close to nature and its beauties.

Lake Skadar was the lake which was named after the city of Shkoder; Lake Skadar maps to the western part of Balkan Peninsula belonging to Northern Albania. It is situated in the Zeta-Skadar Valley belonging to the municipalities of Bar and party Podgorica. The lake belongs to Montenegro and has been the part of the National park since 1983 and the rest to the Albanian territory which is a managed natural reserve. The Ramsar List of Wetlands of International Importance included the lake in its 1996 list. In 2011, it was nominated for a UNESCO heritage status.

Another unique feature of Lake Skadar is that it lies in the “crypto depression” which in simple terms means that some parts of the lake’s bottom are below sea level. These are also known as “sublacustrine springs” or in layman known as eyes. The southern and south-western shores are barren with rocks bays and sublacustrine springs. Its northern part is largely inundated. Islands like Beska Island with two churches and Grmozur Island which was once prison fortress can be found here.

Suggested Read: This Winter, Escape To The Best Honeymoon Destinations In Europe In Winter 2018!

The lake is actually a reservoir in the lakes of Montenegro. The surface of the lake is 12.5km2 with the length of 45km and maximum depth 188 meters. Its height is 675 meters above sea level, the most elevated artificial reservoir in the world. This artificial lake also known by the name of Pivsko Jezero is a result of the construction of the Mratinje Dam on the Piva River which is now blocked because of the hydrological dam called Lake Piva. There used to be a Piva monastery which has now been relocated to someplace which is 8km from Pluzine and 3.5 km from original location took time from 1969 to 1982. Since the level of water has decreased to 10metres so most of the attention is attracted by the Podgorica and the coastal region.

This artificial lake has been constructed in the municipality of Bileca, in the entity of Republika Srpska, Bosnia and Herzegovina. Montenegro has only a small part of it because most of it is being used as Montenegrin border. This lake is a large manmade lake constructed on the Trebijanca River in the year 1968. It is at the upper and central part of Trebsinjica valley, 17km from trebinje town and one of the largest lakes of Bosnia and Herzegovina. The only source of surface water is subjected to extreme weather conditions both in the winter and during the summer.

Image Source
A local center of Rozaje, Montenegro has this lake located in Bisevo. Next, to this lake, there is an alp called Gospodin Vrh. The area where this lake I located is called Rujista and is planned to become a golf course due to suitable facilities. Although most of the lake is left undiscovered, still it is one of the greatest tourist attractions of Rozaje.

Sas is a small village near Montenegro, this lake is situated north-east of Ulcinj. Brisa gora (Mali I Brise) to the southwest, Fraskanjelsko Polije (Keneta e Fraskanjellit) to the east, Ambulsko Brdo (Mali I Shasit) to the northeast and the Brisko Polije (Fusha e Brise) to the northwest borders the lake geographically. The area of the lake is 5.5 km2 and is 3.2km long with 1.5km width and 7.8metres depth and the shore of the lake is about 8.6km.
The lake is acknowledged as Little Lake Scutari because of having the same flora and fauna as found at the Lake Scutari which is moderately quite large. The warmer months call for a large number of different species of birds.

Further Read: 12 Traditional Festivals In Europe That Will Up The Fun Factor Of Your Euro-Tour In 2018-19

As mentioned earlier, Montenegro has some special qualities which make it so unique and one among them is the security and protection of the visitors. It promises to make your vacation a memorable one so that you come back here just like many other tourists who once visited Lakes in Montenegro. Montenegro is known for its crazy parties and unique festivals. So, when are you heading to this little Balkan country on your trip to Europe.

5 Jain Temples In Gujarat That Are A True Architectural Marvel!

6 Places To Visit In Chilliwack For A Blissful Vacation!

5 Places To Visit In Horsley Hills That You Cannot Miss Out On!