Manchester International Festival 2021: A Stunning Celebration Of Art And Music! 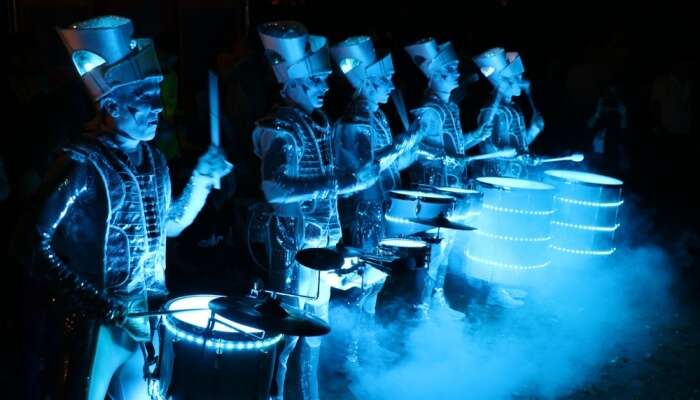 Manchester, an enormous city which is youthful, divergent, dynamic and dazzling with character is amongst the most exciting places across the United Kingdom. Located in the north west of England, Manchester has a gratifying history in science, music, sports, politics, and art. This electrifying city attracts Globetrotters with its eclectic clubs, bars, galleries, and vibrant festivals. Manchester International Festival is one such globally acknowledged international art festival that purveys a common platform for artists from exclusive art forms and backgrounds.

Manchester International Festival commenced from the year 2007, after three successful pre-festival commissions. It was launched as an artist-led festival featuring new creations by prodigies of performing arts and visual arts. The festival has presented some eminent artists to the world, namely, Björk, Steve McQueen, Jeremy Deller, Damon Albarn, Elbow and Marina Abramović, Boris Charmatz, and many more!

The festival is organized every year in the month of June and July and one can experience a plethora of international wanderers, celebrating this vibrant festival of art and music. Manchester International Festival 2019 witnessed the world-class performances organized throughout the Greater Manchester at different locations including performance and concert halls, galleries, museums, heritage buildings, and parks.

Must Read: 10 Best Places To Visit In Manchester For A Great English Holiday

Every year the Manchester International Festival welcomes art lovers with an entirely unique experience, making it the best escapade where one can enjoy irreconcilable performances, dynamic ambiance, delicious delicacies, exclusive designs, with people from different cultures and backgrounds interacting on one common topic, that’s art and its aesthetics. Following are the highlights of Manchester International Festival 2020:

Manchester International Festival for the year 2021 is expected from July 1 to July 18,  across Greater Manchester. Performances were held from noon till late hours at numerous venues, where one could hop on according to their priorities. If you are willing to be a volunteer at the MIF 21, then you need to register for the same. The festival will make you witness some spellbinding performances amidst the vibrant aura with thousands of artists from across the globe admiring the unique and innovative art forms.

DISCLAIMER: We will be updating you with the 2021 schedule soon. So stay tuned!

The current year schedule of the Manchester International Festival features numerous established artists under one-roof, merely impossible to be experienced in any other biennial international art festival. This 17-day festival will be featuring 4 to 12 shows per day including ticketed and free performances.

How To Reach The Venue

Traveling to Manchester from India is best via plane. The travelers planning an excursion to Manchester must apply for the Standard Visitor Visa of the UK. The Standard Visitor Visa can be availed only for leisure, business, and medical treatment and permits a stay of a maximum of 6 months. Following are the best ways to reach Manchester:
By Flight: Manchester Airport is the second largest airport in the United Kingdom, located in the southern part of the city. This airport welcomes over 100 operators flying to and from around the globe. One can either take direct trains connecting the airport to the other part of the city or take a taxi from the airport to their destination.
By Train: Manchester has two main railway stations that are Victoria station in the north and Piccadilly station in the south of the city. Victoria is primarily for local trains whereas Piccadilly has connectivity to long distance stations.
By Road: The most inexpensive mode to get around in Manchester is via road, either by car or cab. London features really cheap taxis through which one can comfortably commute at different venues of the Manchester International Festival.

Manchester, the home to world-class events and festivals lure thousands of art admirers with its unique experience. From jam-packed performances to prolonged enlightening art conversations, one gets a miscellany reason to celebrate the liveliness of this energetic city. Witness the vibrant Manchester International Festival 2021 by planning a trip to Manchester via TravelTriangle. You can also get your itinerary customized according to your preferences and interests.