10 Scintillating Mountains In Brazil That Will Take Your Breath Away! 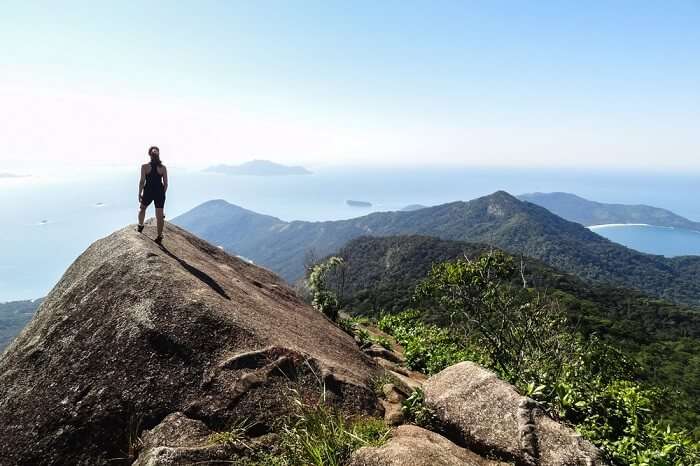 Brazil is a land of many natural wonders, from the beautiful seas to the towering mountains, this nation has it all. It is because of these stunning natural formations that Brazil is such a popular tourist spot. With an average elevation of around 2000 meters, these mountain ranges are a huge part of Brazil. These mountains in Brazil date back millions of years and try are still standing tall and protecting the nation.

Here is the list of some of the notable Brazil Mountains and mountain ranges that you should definitely visit on your trip. Keep scrolling down and read along!

Towering at a height of 9,827 feet; which is just a little shy of a boast-worthy 10,000 feet; Pico da Neblina stands near the neighboring Venezuelan border and is touted as the highest mountain in Brazil. The summit is actually in the Guiana Highlands which is located in the Serra da Neblina region. The peak is hidden in foggy clouds and is a beautiful reflection of its name which means ‘Peak of the mists’. Discovered in the year 1965, the ecosystem of this summit remains unaltered due to preservation efforts which have resulted in two national parks known as the Pico da Neblina National Park and Serrania de la Neblina National Park. But the sheer inaccessibility to this region has also helped in keeping this place a little haven safe. Thriving quietly on this mountain are over 200 species of hardwood trees, blue and yellow chested macaw birds and reptiles like caiman snakes and turtles.

Location: In the Guiana Highlands

Must Read: Scuba Diving In Brazil: 10 Brazilian Sites That’ll Give You The Best Diving Experience

This mountain has an elevation of about 9,758 feet and so it is the second highest peak in the country. Located in the Amazon region, it falls both within Venezuela and Brazil’s territories. The fauna and flora found in these remote areas are wonderfully diverse, which has resulted in some not being discovered to this day. The bird species found here include the green-winged and scarlet macaw, mammals include sloth, Capuchin monkey, tapir, faint otter, and brown howler monkeys. But there are also frigs, poisonous snakes, iguanas, caiman and more which prowl around this place and call it their home.

Pico de Calcado towers at an impressive 9,347 feet and is thus crowned as the fourth higher summit in Brazil. It is located in the Espirito region and is pretty easy to get a climb on since there are little rocks or vegetation at its summit. This peak located very near to the Pico do Calcado Mountain.

Location: It is located within the Caparao National Park.

Suggested Read: 7 Best Villas In Brazil For A Rejuvenating Holiday Experience In The Carnival Country!

With an elevation of about 9000 feet and more, this peak is located in the Serra Fina section of the beautiful Mantiqueira Mountains, which has been said to be one of the most important mountain ranges of the country. It is present between Quelez which is in São Paulo and Passa Quatro which is present in Minas Gerais. This peak is the fourth highest in Brazil and is definitely the highest in São Paulo. Pedra da Mina is also notable for its very peculiar history and in spite of its very high peaks and also being situated pretty close to very densely populated areas, the mountain was virtually unknown Gill the 21st century rolled around.

Also known as the Black Needles Peak, the Pico das Agulhas Negras forms a part of the Serra da Mantiqueira, which is a mountain range that is located on both the States of Minas Gerais and Rio de Janeiro. Its elevation is at 2,791 meters (9,157 feet) which also declares this range as the fifth highest in the country. The jagged and rough peaks of this mountain give it its unique name. Despite various unrelenting attempts at climbing it, once in 1856 by Franklin Massena and furthermore in the years 1878 and 1898 by André Rebouças and Horácio de Carvalho respectively; the peak was finally reached in the year 1919 by Osvaldo Leal and Carlos Spierling.

Location: In the states of Minas Gerais and Rio de Janeiro

Mount Roraima is actually the highest peak in the Pakaraima chain of tepui plateaus found in South America. It has an elevation of 9,219 feet and the mountain serves as a tripoint between Brazil, Guyana, and Venezuela. Mount Roraima actually forms a border between Venezuela and Brazil. There are not many species found in the Roraima, which is unique to the tepui plateaus itself, but the two endemic plants called the pitcher plant and Campanula are found on the summit. Its entire surface is made up of bare sandstone but there are a few scanty and bristling vegetation found as well.

Location: It lies in the Guiana Shield in the southeastern corner of Venezuela’s 12,000 square mile Canaima National Park.

At a height of 4,586 feet; the Pico do Monte Negro is the Rio Grande do Sul’s highest peak. This mountain is popular amongst climbers but is considered to be suitable for the more experienced ones. This mountain is attractive also because it is covered with the lush and vibrant Araucaria forest. Located in the canyon of the same name, it is possible to reach the base of this mountain by the car itself with the rest of the way being traveled by foot.

Location: At the city of São José dos Ausentes.

The Hill of the Portuguese is located in the state of Santa Catarina; this peak stands at an elevation of 5,978 feet. Actually, the Morro da Igreja is classified as the highest inhabited point of the whole state and is also it’s the second highest summit. This area is also the coldest in all of the nations with temperatures dropping well below the freezing point. As such, tourism also is very popular during the winter due to the beautiful snowfall which engulfs the landscape. As for natural formations, there are some curious ones in the area which are called the Pedra Furada and they literally mean Drilled Stone.

Located: In Urubici which is a municipality of the Santa Catarina state in southern Brazil

The Sugarloaf mountain in Brazil has a height of just 396 feet and is located in Rio De Janeiro on a peninsula which leads straight into the beautiful waters of the Atlantic Ocean. It is comprised of quartz and granite and rises straight out of the waters. Its unique name is said to come because it resembles the shape of traditional refined loaf sugar. It is part of a World Heritage Site. A glass-walled cable car also runs between this peak and Morro da Urca every 20 minutes.

Location: In Rio de Janeiro, Brazil, right at the mouth of Guanabara Bay on a peninsula.

Suggested Read: Brazil With Kids: The Special Guide For Your Family Vacation!

These mantiqueira mountains are part of the states of Minas Gerais, São Paulo, and Rio de Janeiro. It rises to a height of about 9,180 feet and were forest covered (except the peaks that tower above the forest line). The name means ‘Mountains that cry’ due to the huge numbers of water bodies like springs and streams which are found there. These mountains provide pasture for cattle and charcoal as well apart from servings as tourist and health resorts.

Location: In the states of Minas Gerais, São Paulo and Rio de Janeiro.

Further Read: 4 Incredible Castles In Brazil You Must Visit To Make For A Memorable Trip To The Country

The mountains of Brazil are picturesque and a beauty to behold. They offer a lot of recreational activities which can be carried out by visitors. Get packed, book your trip to Brazil and explore the stunning mountains!