Museums Near Masjid Sultan: The Best Of Singapore Under One Roof 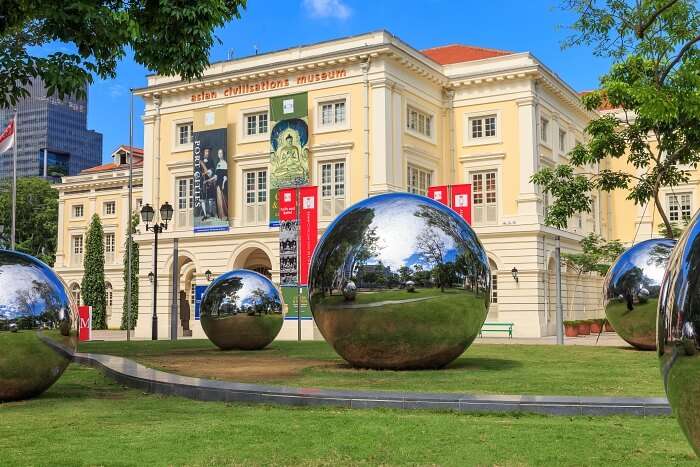 Sultan Mosque is located in Muscat 3 Street and is the center of Kampong Glam district. It is also known as Sultan Masjid after Sultan Hussein Shah. However, the mosque was built in 1824 and the original building was demolished a century later and became the foundation of the current building, completed in 1932. The mosque is of great importance to the Muslim community. It was declared a national monument in 1975. There are a number of museums near Masjid Sultan in Singapore.
The Sultan’s Mosque, with its huge golden domes and grand prayer hall, is a must if you are in the old town of Kampong Glam. Singapore’s founder, Sir Stamford Raffles, donated $ 3,000 for the construction of the first mosque.

One hundred years later, the old mosque needed urgent repairs. The current mosque was designed in 1932 by Denis Santry of Swan and Maclaren, Singapore’s oldest architectural firm, and was rebuilt today. Little is known about the reconstruction of the mosque. In fact, the north bridge road should overthrow the mosque. It extended beyond the Arab street. Examine the onion cupolas during your stay. Each dome is decorated with glass bottle caps offered by low-income Muslims during construction, so that not only Muslims, but also the rich, can contribute. The mosque, classified as a historical monument in 1975, has long been a meeting place for the Muslim community. If you are in Ramadan, the month of Muslim fasting, you should visit the area’s night market and the many food stalls. Participate in information visits to the mosque. The guides speak English, Malay, Chinese, and even Japanese.
The mosque occupies 4,910 square meters of land and adapts to Mecca instead of adapting to the urban network. The connection is limited by a wall of cast iron balustrades.

The most striking feature of the mosque is the two golden onion cupolas on the east and west facades, each crowned with a half-moon and a star. The pedestal of each dome is decorated with pieces of glass that the sultan collected as a gift from the poor Muslims. He wanted all Muslims, not just the rich, to help build the mosque.

The roof bars are covered with a merlon comb. At each corner of the mosque, there are minarets with stairs that lead to the towers with balconies. The west facade of the North Bridge Road Mosque is also the entrance to the Tunku Alam Mausoleum, which died in 1891, whose remains are clearly visible under the dome. Two eight-storey minarets line the east façade and 4 Doric columns supporting structure.

The Battle Box is a famous historical place in Singapore with a very interesting history. Its purpose, originally, was to serve as a bomb-proof bunker of Britains Headquarters Malaya Command, during World War II. Nine meters beneath Fort Canning Hill, it is said to be the site where General Percival reached the doomful decision of handing over Singapore to Japan on February 15, 1942.

Now, an interesting museum and tourist attraction, the Battle Boxs 26 underground rooms are used to depict various stages of battle and prominent warriors of the battle. There are wax statues, moving figures which use the concept if animatronic, war collections and such.

The feeling of nostalgia is dominant inside the historical buildings in Singapore. Rows of toys, collectibles and comics will take you down the memory lane. Besides, the information about the era to which they belong is quite interesting.

The Trick World has some of the most loved Trick Eye exhibits on display. Here you see some of the highly impossible events coming to illusionary realy. Take an ocean ride on the popular mythical Singaporean lion-fish; perform the most difficult postures of professional Ballet dance along with other illusionary dancers; indulge in a horse riding race or challenge a Kung Fu master on a fight. This zone of Trick Eye Museum is rather more artistic than illusionary.

Note: You can book upto 20% if you book online.

To know what other visitors have to say about the Trick Eye Museum in Singapore, click here:
Reviews

Read More: Challenge Your Sense Of Reality At The Trick Eye Museum In Singapore!

Singapore is one of the busiest in the world and the largest port in Southeast Asia. It has witnessed such tremendous growth due to its central location at the southern tip of the Malaysian Peninsula, overlooking the Strait of Malacca, which remains a link between the South China Sea and the Indian Ocean. Singapore, a former British colony and now a member of the Commonwealth, joined the Federation of Malaysia when it was founded in 1963, before moving to an independent state on August 9, 1965. These museums near Masjid Sultan document just that and more. Thus, while visiting Singapore, do check out these places.