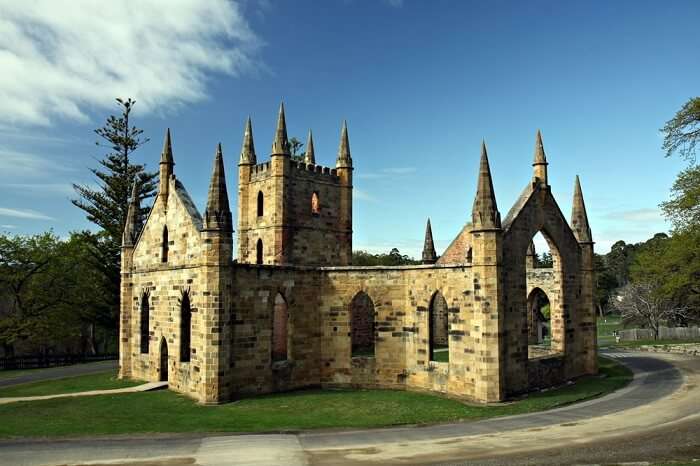 Australia is a place to reckon with for its delightful beaches, scenic beauty with great landscape and the historical heritage that imbibes the country. Apart from the scenery, Australia is known for its wide wildlife and has a lot to offer to animal lovers. Australia’s bright side makes it a place one must visit at least once in their lifetime. However, the point is, every place has something unusual that shows its dark side. While we look in awe at the beauty the country comprises of, we sometimes miss out on the unusual aspects, the mysteries that certain places have hidden in their history. For it is obvious, we always overlook what is underneath us, where we are standing. While one might have thought Australia only has the beauty, we found ten such mysterious places in Australia that will ignite a curious mind.

Get ready to explore these following places, for you are in for a ride. After this, we sure can say Australia has it all, with diversity in every aspect. For, every trip we take, a little spook here and there comes handy with the tedious sightseeing. We have some unsolved mysterious coming your way with ten mysterious places in Australia.

With every ‘must visit list’ you check, The Pinnacles always makes a spot for itself. While most like the unusual beauty it has for the sightseers, there is some for the curious mind too. Laying in the Western Australian Nambung Desert is the Pinnacles. When you stroll down the pathway of yellow sand, you will find a collection of strange limestone rock formations stretched in a kilometer-wide area. The scenery of these rocks is often nicknamed as the ‘Life on Mars’. Past owners of the land have claimed that these rock formations represent the number of people (locals) who have been historically consumed by the deserts quicksand. These structures serve as a warning to the sightseers to stay off the creepy desert to avoid being consumed.

Must Read: 14 Ways To Celebrate And Enjoy Christmas In Australia

Image Source
The name that sounds cute has unexplained, unusual aspects that highlight the place. A road stretch measuring 120 in Queensland has a big banner when entering that reads that when travellers drive across this road, there are lights that follow the travellers to long distances. These lights have been unidentified, and no one knows how and why travellers encounter it. the first recorded sighting of this mysterious light was back in 1838, with some claiming that anyone who has ever tried to follow the light has never returned to tell the tale.

Image Source
Better known as the ‘Picton Ghost Tunnel, this infamous railway tunnel is known to be home to a plethora of mysterious supernatural activities that take place from time to time. The now abandoned tunnel was closed in 1919, and according to legends and the local of the place, they claim the tunnel is haunted by the spirit of Emily Bollard. It is said that in 1916, Emily Bollard was killed when struck by a train in the middle of the tunnel. That is not all, for the train seemingly dragged the corpse of Emily Bollard to the next train station. Whether the tunnel closed because of such mysterious activities or for a general reason, nobody clearly knows, for everyone has their own version to tell.

Opened in 1832, the Quarantine Station served as a place where people were admitted avoiding the spreading of infectious diseases. During its heyday, the place witnessed thousands of people with diseases like cholera, smallpox, and Spanish flu, who eventually died. Strangely enough, this place now hosts ghost tours with unusual activities that keep happening when there. The officials claim that the place is haunted, especially the first-class shower block. Well, who knows.

Image Source
Certainly, one of the most mysterious places in Australia, the Devils Pool has until now claimed 17 lives of young men. Nobody could determine the exact reason behind their death that has been taking place since 1953. Seemingly, these 17 lives have gone away under mysterious circumstances. Legends claim that an ancient, lovelorn spirit haunts the place. Who happens to reside among the waters and seduce young men into falling to their death. Though heavily barricaded, the Devils Pool mystery is yet unsolved. There is a plaque in the memory of these boys that reads ‘He came for a visit and stayed forever’.

Image Source
Coober Pedy is a red desert that has an underground mining town and houses 80% of the country’s opals. Established after the WWI, Australian soldiers chanced to make it big in the mining industry back then. Whilst working underneath, the workers there realized that the climate underneath is cooler than the hot desert climate that waited above them. Soon, hostels, churches, homes, etc began to open underground. Today, it has an underground town with the desert laying alone above them.

At one point of time, it served as the prison to who and who of Australia’s high profile to deranged criminals. Although not a prison anymore, the place has some parts of it transformed to luxury apartments. What is weird is, visitors have experienced strange and mysterious encounters. With visitors claiming they heard a notorious criminals voice from cell no 16 saying ‘Get Out!’ repeatedly. It is one of the most mysterious places in Victoria Australia.

Image Source
You probably have seen the movie and minutely freaked out learning about the mysterious craters. Well, thanks to these obvious and clearly distinctive crater holes, the Wolfe Creek Crater houses the legitimate crater hole in the world. This mysterious crater was created by a meteorite in 1940 and was discovered from space.

Image Source
Australia’s most notorious penal station, Port Arthur is known for the harsh condition of the convicts who loved there. Apart from their miserable life, this historic structure is also known for its worst post-colonial massacre in the history of the country. In 1996, a gunman had opened fire visitors and taken 35 lives. It is claimed that the convicts who were housed here committed murders inside the prison, so they would be granted subsequent execution. The miserable conditions and the psychological brutality they suffered is to be credited for such atrocities that made this place one of the worst places to be in and making its way to the list of mysterious places in Australia.

Further Read: Best Airports In Gold Coast That’ll Let You Have A Perfect Start To Your Australian Vacay!

Australia has given us both mystery and horror in one single list that not only aided to our curiosity but has our minds ticking to visit the places. However, more than reading it would be a greater spooky experience if you were to visit these places knowing the mysteries and stories that tail behind. Therefore, next time you are on your trip to Australia with TravelTriangle, chance yourself to experiencing the spooks and quirks that these places have in store.

What is the story behind the Devil’s Pool?

It is believed that Devil’s pool is haunted by a lovelorn spirit. The spirit is believed to reside among the waters and seduce young men.

Can travelers visit the HM Pentridge Prison which is one of the most mysterious places in Australia?

Yes, travelers can take a tour to this prison where one can discover the footsteps of notorious Chopper Red and the outlaw Ned Kelly’s remains and also experience the final moments of Ronald Ryan who was the last man executed.

How was Wolfe Creek crater formed?

The Wolfe Creek is the second largest crater and is believed to be formed when a giant mythological snake raised its head from the ground back.

How long is the Picton Tunnel?

The Picton tunnel is 592 feet long and is carved into the hills of the Picton region.

How much does it cost to get into the Pinnacles?

The entry fee to the Pinnacles is $13 per passenger vehicle. Travelers can explore the park and click amazing pictures of the Pinnacles.

What was the story behind the Port Arthur Massacre?

Port Arthur was known for the harsh condition of the convicts, who lived there. The place is also known for the tragedy that happened here in 1996 when the gunman started mass shooting, and nearly 35 people died.