New Year Party In Australia 2021: For Slaying The New Beginnings In Aussie Way! 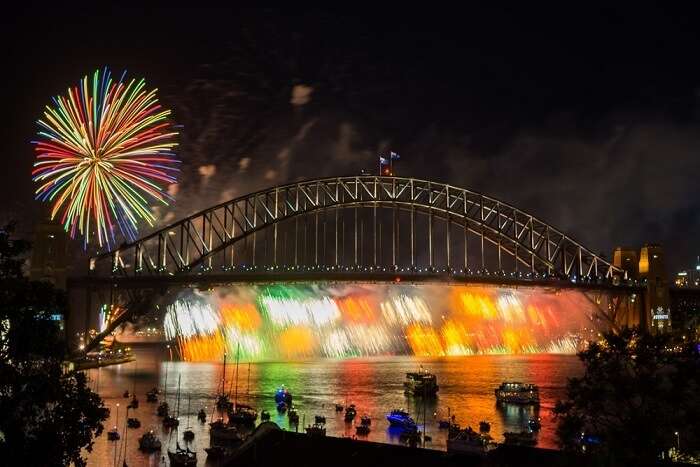 Australia is a modern country and is situated in the eastern hemisphere. This is one of the first major countries on the planet that celebrates new years as the clock strikes midnight in Australia before any other major country. Many people love to travel to Australia for New Year’s Eve as the weather is beautiful and it is one of the best places in the world for a New Year’s party. Australia tourism generally showcases this time of the year as an ideal time to visit Australia.

Feeling excited already? Read on to know why a New Year party in Australia is the meant for you!

Weather In Australia During New Year 2021

Australia is situated in the southern hemisphere. When it is cold and frigid in December-January in the Northern Hemisphere, it is sunny and warm in Australia where these are the summer months in the country. Many people from Asia, Europe, and North America travel to places like Australia where the weather is good and the New Year’s Party atmosphere is great.

New Year’s Party is a great time for people to celebrate the year that they have had and look forward in a positive way to the year ahead. Australia is a large country with many major towns and cities. Parties and celebrations are different in different cities in the country.

The following are some ways in which cities in Australia celebrate New Year’s:

The fireworks in Sydney are famous all over the world. At the stroke of midnight, at the Sydney Harbor, Sydney showcases a spectacular display of fireworks near the Sydney Harbour. Millions of people visit the harbor and the party lasts for hours. Besides the fireworks display, there is popular music and a party atmosphere among the attendees. This is one of the best New Year’s party in Australia and billions of people watch the firework display from all over the world.

These splendid firework displays can be witnessed from different parts of the city as there are parties organized to witness the fireworks at different restaurants and bars in the area. There are cruises with parties on the harbor which have a great view of the fireworks and are popular on New Year’s Eve.

Promiseland New Year’s Eve party is a big event in the city, and the New Year’s party at the Garden State Hotel is also very popular. Depending on the kind of party, tickets are generally sold in advance. There are parties where tickets are cheap and some parties are very exclusive and have VIP guest lists. Tickets are generally sold in batches, there are group options and early bird and all-inclusive packages are available to make it affordable for the customers.

Brisbane is a great city on the eastern coast of the scenic land of Australia and this city is known for sun, sand and a beach party atmosphere. This is a great city to spend the New Year celebration in Australia as there are great parties in the city. Though not as famous as Sydney Harbor fireworks, there is a great NYE fireworks display along the Brisbane River in the city. Brisbane has a pretty happening club district in the Fortitude Valley area of the city. Brisbane has many parties in the city at major restaurants, lounges, and bars and the people in the city have a lot of options for having a blast on New Year’s Eve in Australia.

There are boat parties and cruise parties on the Brisbane River. Brisbane has many great places to party throughout the city. Partying at the Brisbane beaches on New Year’s is a great idea especially for a younger crowd in the city.

Perth is the party destination in the state of Western Australia when it comes to New Year’s parties. Perth has many rooftop parties, carnival parties, masquerade parties and Perth truly has a New Year’s festival in Australia with many events throughout the summer leading up to the NYE bashes in the city. Garden parties, parties at local restaurants, bars and cafés are all part of the NYE experience in Perth. There are great NYE fireworks over the Swan River in Perth. There are many venues with great food, great music, and a lovely dance party atmosphere.

Darwin is one of the best tropical cities in the northern regions of the country. Darwin has a multicultural population and there are great restaurants and bars that serve cuisine from all over the world. There are many parties in the city and there is a great fireworks display on the Darwin Wharf and Darwin Harbor at midnight.

Adelaide is the capital city of Southern Australia. This is a large city in Australia and just like other major cities in the country, there is a magnificent fireworks display in the city. NYE fireworks are quintessential for New Year’s Eve in Australia at midnight. In Adelaide, there is a great fireworks display on the Torrens River in Adelaide. Adelaide has many great hotels and restaurants that host awesome New Year’s parties and tickets to these events are sold out days in advance. There is a summer festival in Adelaide that finishes with a New Year’s Eve party.

Hobart is the capital of the large island of the coast of the Australian mainland called Tasmania. Hobart has a fireworks display for the public over the Sullivan’s Cove on the Derwent River. There are many sailing yachts on the harbor where there are fabulous parties and there are also great cruises on the Derwent River. There is a party atmosphere in the city during the New Year’s and it is a great place to be at this party time on NYE.

Suggested Read: Gold Coast In Winter: To Travel This Glorious Australian City With Your Loved Ones!

Here are the parties and festivals you can attend in Australia to welcome the new year with a bang during your vacation in Australia.

Image Source
Enjoy 3 days of camping, food, music, and yoga at Sydney’s most famous music festival, Lost Paradise. If you like to party like a hippie, you should definitely attend this one. ANd, that is not it. Top-notch DJ artists are lined up for the event so that you get the best of music experience. It is a great way to enjoy a good old-fashioned New Year Party in Australia.

Why celebrate New Year just one day when you can continue the celebrations for 4 days at Beyond The Valley Festival? If you are in Melbourne and want to have a celebration that you remember for years to come, this is where you should be. This music festival is very well curated with nation’s best talents. Enjoy good food and music and camp under the stars for these 4 days. Isn’t this a perfect way to end the year?

Not just music, but also get the best of scenery at Gold Coast Island festival which is the best place for new year’s eve in Australia. Come, be a part of one of the biggest party in Australia all set with style, glamour, and experience. The best part is you get to party on the boat floating on the Pacific Ocean. Party from sundown till sunrise and welcome the new year with an extravaganza.

New Year Festivals in Australia is a time when people want to just let go and enjoy a great party. As mentioned above, all major cities in Australia have a great party atmosphere and many great parties are planned in these cities. Australia is a modern and fun place to live in and many tourists also enjoy visiting these Australian cities during the New Years. Australia is one of the best places to be at around the time of New Year’s. No need to wait for planning for a perfect New Year party! Plan your trip to Australia with TravelTriangle and head straight with your party shoes on!

How do Australians celebrate New Year?

Like most of the world, Australians spend New Year by partying hard. There are wild partes, music, and other forms of entertainment on the eve of New Year’s that you could attend on your vacation in Australia in December.

What are some Australian New Year’s traditions?

Australians spend their New Year’s on January 1 outdoors by organizing day picnics and beaches in Australia. They organize barbeques in their homes and invite their friends and family over.

What do Australians eat for New Years?

There is a tradition of having a barbeque in Australia for the eve of New Year’s. People eat grilling sausage, steak, and lamb grilled and smoked on barbeque.

Where can I spend New Years Eve in Australia?

What time do fireworks start in Melbourne?

Where can I watch the New Years Eve fireworks in Sydney?

Is New Year’s Eve a holiday in Australia?

January 1 is a public holiday in Australia. It is when Australians spend time outdoors and go out for a picnic to the beaches or park. Offices, schools, and businesses are closed.