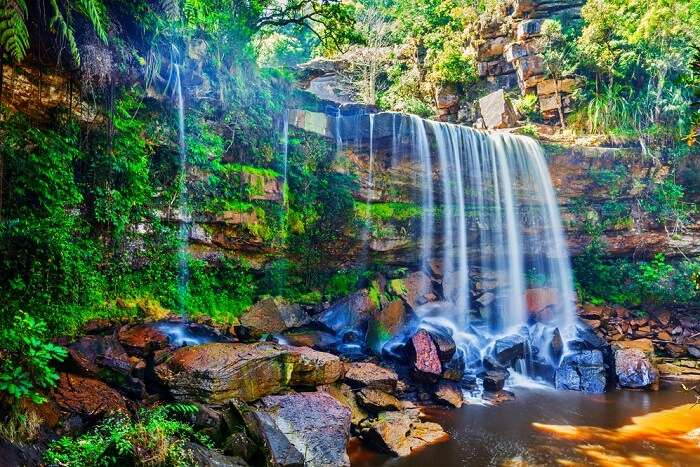 It’s a fact that tourists love visiting Cambodia for its world famous Angkor temples, but every traveler should definitely make it a point to visit at least one of the seven national parks in Cambodia. The national parks are a great example of some of the key attractions of Cambodia – the biodiversity and beauty. These seven majestic parks offer a wide range of flora and fauna and flora, including some rare species of wildlife. For your visit, we have compiled the complete list of national parks in Cambodia, and all the information you need to know before visiting them.

The Most Popular National Parks In Cambodia

Although not much information is provided about the location of the maps online, one can easily pick up a copy of the Cambodia national parks map, and use it to find their way around the parks.

Image Source
The Phnom Kulen Park, a part of the Phnom Kulen mountain massif, is one of the top national parks in Cambodia. Located inside the park are a number of amazing tourist attractions that attract a number of tourists all year round, like the Preah And Thom Statue which is an eight-metre tall statue of the Buddha located in the park, and the Kbal Spean, which is an archaeological site with a few religious monuments that are carved into the rocks of a river bed. Apart from these attractions, you will be impressed by the vast wildlife of the park, as well as their picturesque waterfalls.

Must Read: 10 Temples In Cambodia That Stand As Epitome Of Antiquity

Image Source
This park, which occupies an area of around 1,700 square kilometres, is one of the largest of all Cambodia national parks, and should definitely be on your itinerary if you visit Cambodia. This park has a very unique biodiversity which includes over 45 species of mammals like the Bengal slow loris, the indochinese tiger, pileated gibbon, and the Sunda pangolin. Apart from these wild animals, there is also a rich avian life, with over hundred species of birds, including some rare species. Most of the park, which was previously filled with evergreen forests and woodlands, is now covered with swamps and mangroves.

Image Source
This park covers an area of around 3,300 square kilometres, and is a great place to witness some amazing views of Cambodia nature. It is also one of the most protected parks in Cambodia, because of its valuable natural resources and the rich biodiversity of this park. Therefore, it is among the areas that are listed under the ASEAN Heritage Parks. Another great part about this park is that it houses one of the most isolated, and largely unexplored forests of Cambodia, and has an impressive wildlife as well as some rare flora.

Image Source
The Ream National Park in Cambodia had been established in the year 1993, their main aim being the protection of the rare natural resources of Cambodia. Located in the south-eastern region of the Sihanoukville Province, this small park covering an area of around 200 square kilometres, has both marine as well as terrestrial habitats, and houses animal species such as pelicans, Rhesus monkeys, dolphins, and sarus cranes as well. Around 30,000 people reside around the fringes of this park, and depend solely on the park for their livelihood.

Image Source
Like the Ream National Park, this park was also established in the year 1993, and covers some parts of the Kampong Speu and Koh Kong provinces of Cambodia. Like most other parks in Cambodia, this park has a picturesque mountainous landscape, at an elevation of 675 metres, due to the fact that it encompasses some parts of the Cardamom islands. There are a lot of trekking and hiking trails in this park, through the magical forest regions, and has a number of lakes and waterfalls one can admire on these trails.

Image Source
Another park that was founded in the year 1993, the Kep National Park is located in the Kep region of Cambodia and is comparatively small to the other parks in Cambodia, covering a space of only 50 square meters. However, the small size of this park doesn’t hinder its beauty and there are quite a few hiking and trekking tracks and trails, where visitors can look at some magical landscapes of Cambodia and marvel at its sheer beauty. Places like the Phu Quoc, Bokor Ranges, and The Gulf of Thailand are some of the places that can be seen from the Kep National Park.

Suggested Read: 10 Essential Things To Do In Phnom Penh On Your Cambodian Trip

Image Source
Located in the Kampot province of southern Cambodia, this park makes for the southeastern portion of the Cardamom Mountains. Being a mountainous region, most of the park is at an elevation of a 1,000 metres, with the Phnom Bokor being the highest peak in the park, standing at a height of 1,081 metres. What makes this park stand out from the rest is the fact that there is a high end luxury hotel located right in the vicinity of the park. Apart from all these things, the tallest statue of Lok Yeay Mao, a mythic Cambodian heroine is located in the park premises.

Further Read: These Siem Reap Floating Villages In Cambodia Will Cast You Away Into A Surreal World

These national parks in Cambodia must have peaked your interest to visit this beautiful country. It’s time to plan that perfect vacation to Cambodia and turn your vision of being one with nature into a reality.

Q. How many national parks are there in Cambodia?

A. There are 7 National Parks in Cambodia each known for its exclusive experiences.

Q. Where can I stay in Cambodia?

Q. Where can you see wildlife in Cambodia?

Q. What kind of animals live in Cambodia?

Q. Are there tigers in Cambodia?

A. Tigers are currently extinct in Cambodia and the last one captured in camera in 2007.

Q. What is the top predator in Cambodia?

10 Most Popular Festivals In Cambodia: An Insight Into Its Rich Culture In 2020!

8 Refreshing Toronto National Parks In And Around The City That’ll Make Your Canada Trip In 2021 An Awesome Affair!