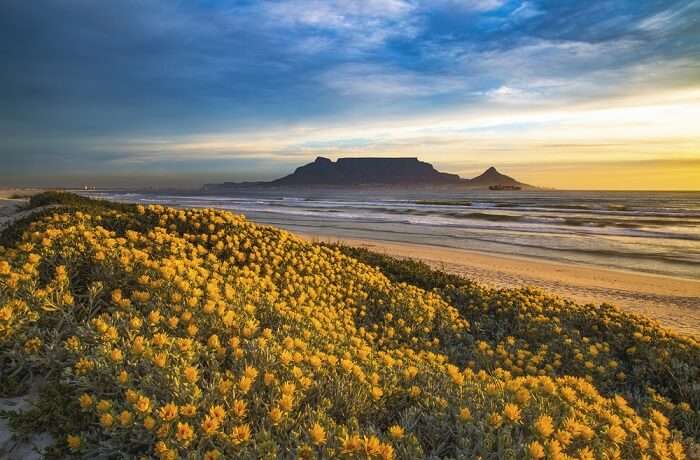 National Parks are a site of attraction to tourist visiting from different places over the world. The national parks in Cape Town are significant with its uniqueness in pulling numerous visitors every year. Situated in the southwestern curve of South Africa with a warm Mediterranean weather and mild moderately wet winters, the city is close to several notable national parks. The national parks in Cape Town celebrate a national park week, SANParks Week (South African National Parks Week) which gives free chances to the visitor to roam about in their local national park every year. The city has a beautiful view from the top of the mountain’s dock towards the Robben Island (World Heritage Site declared by UNESCO in 1999) and is mainly seen from the most well known national parks in Cape Town- the Table Mountain National Park Peak. Cape Town, the capital city of South Africa, is situated in the southwestern coast on a peninsula below the Table Mountain range with a surface area of 400.3 sq km and a total population of 4.34 lakhs according to 2011 census.

National Parks Cape Town Accommodation does not consist of free admission to visitors. There are boarding houses, tents, old farms, lodges provided with different rates to the people by the national parks in Cape Town.

Viewing the city from the peak of Table Mountain range can be called as an iconic vision of the country. The park (TMNP) is the largest and significant national parks in the country. It spreads out from the Table Mountain over 221 sq km to Cape Point. The park is also well-known for its exclusive vegetation of Fynbos in the region. Wildlife in the estate is limited to small mammals, antelope, birds, and reptiles. There are several access points of the park with no requirements of admission fee for most of them. With its uniqueness in bordering the city, people mostly take advantage of mountain bike, to hike the protected region, for a picnic, or simply to take views.

The park locates in the West Coast province of Cape, South Africa with a distance of 120 km north of the city. This park is also one of the important national parks of Cape Town with an area of 36,259.8 hectares. The park is famous for its feathered creatures and spring flowers occurring from August to September, mainly in the Postberg flower store section. To the west, the park borders the Atlantic Ocean and to the south, it borders R27 coastal road running from Yzerfontein town to the Langebaan Lagoon.

Suggested Read: Everything You Ought To Know About Cape Town’s Victoria And Alfred Waterfront

Agulhas National Park is situated in the Agulhas Plain, in the southern part of the Overberg area of the Western Cape and is about 200 kilometers south-east of Cape Town. It is a South African National Park stretching along the region of the coastal flat-land between the cities of Gansbaai and Struisbaai including the southern tips of Africa at Cape Agulhas. According to January 2009 survey, it is estimated in covering a surface area of 20,959 hectares. The famous tourist attraction of the park is the Cape of Agulhas and is believed to be the meeting end of two oceans (Atlantic and Indian Oceans). The months of November to January are mainly for whale watching in the Agulhas National Park. Animals mainly found in the region are the Southern Right Whale, Cape platanna, Damara tern and African Black Oystercatcher.

Location: Western Cape, South Africa
Entry fees: According to daily conservation and entry fees for 1 November 2018 to 31 October 2019. Different rates according to age groups and Id proofs. Availability of Wild Card Year Permits for all guests.

South African parks with a different picturesque view have a remarkable place to visit in a unique place between mountains and the Tankwa River. The park lies within it and was established in the year 1986 with an area of 1,436 sq km. Located in one of the aridest regions of South Africa, wildlife in this park is very rare. And with the slow existence of wildlife, only a variety of antelope and small mammals like hares, porcupines, and mongooses, including other animals like leopard, aardvark, aardwolf and caracal are found. Overnight accommodations of boarding houses, tents, lodges and old farmhouses are managed by the South African National Parks in Cape Town. The Park is famous for an event is known officially as Burning Man regional event. And it is commonly known as AfrikaBurn to the local people of the region.

Location: Northern Cape, South Africa
Entry fees: According to daily conservation and entry fees for 1 November 2018 to 31 October 2019. Different rates according to age groups and Id proofs. Availability of Wild Card Year Permits for all guests.

Suggested Read: Shopping In Cape Town: 11 Best Places That Are A Shopaholic’s Retreat

Bontebok National Park was built in 1931 with an initiative to preserve the Bontebok. It (Bontebok)is a creature found in countries like South Africa, Lesotho, and Namibia. The park is also known for its uniqueness in preservation as a Species-Specific national park in South Africa. Located in the Western part of Cape in South Africa, it covers 27.86 sq km in terms of area and is smaller than twenty national parks of South Africa. It is bordering the Breede River to the south and is located 6km south of Swellendam in the foothills of Langeberg Mountains. Apart from the Bontebok other breed seen in the park are Stanley’s bustard, Secretary bird, the African Clawless Otter, the Blue Crane, Cape Grysbok, Duiker, Red Hartebeest, Grey Rhebok, and Cape Mountain Zebra. The estate is also known for being a part of the World Heritage Site of the Floristic Region.

Location: Western Cape, South Africa
Entry fees: According to daily conservation and entry fees for 1 November 2018 to 31 October 2019. Different rates according to age groups and Id proofs. Availability of Wild Card Year Permits for all guests.

Suggested Read: 10 Vibrant Restaurants In Cape Town For The Real Foodie In You

This is a national park of South Africa and is situated in the Northern Cape Town. It is 22km northwest of Kamieskroon with an area of 700 sq km. established in the year 1999, the beautiful landscape of flower carpets of this park invites thousands of visitors every year to feel its breath-taking site. It is estimated of 100,000 tourists visiting the park every year. The main tourist’s attraction is the blooming of the spring flowers in the wheat fields. The park is also well known for providing shelter to the world’s tinniest tortoise, commonly known as the Namaqua Speckled Padloper. This park was created mainly to protect its flowers with juicy plants in its arid environment. It is semi-desert with hot and arid summers and freezing winters with the eastern part receiving more rainfall than the west.

Location: Northern Cape, South Africa
Entry fees: According to daily conservation and entry fees for 1 November 2018 to 31 October 2019. Different rates according to age groups and Id proofs. Availability of Wild Card Year Permits for all guests.

Further Read: 10 Romantic Cafes In Cape Town That Every Couple Must Visit

The picturesque beauty of these parks invite visitors from various places of the world, and creating an awareness of visiting these National Parks in and around Cape Town will attract tourists from different parts of the world. So, plan a trip to South Africa and experience the rustic wilderness it has to offer.