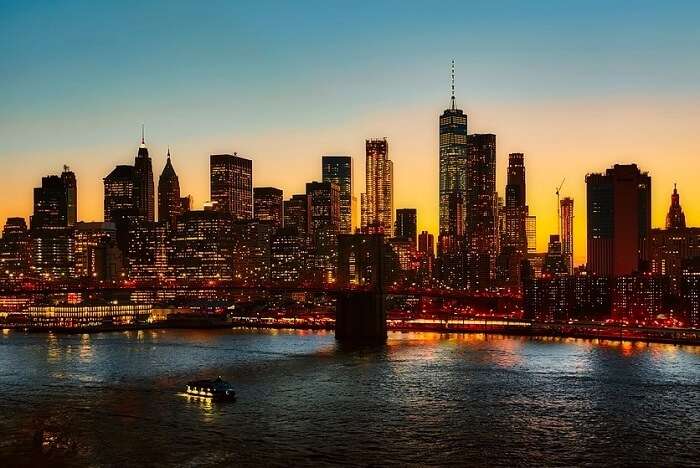 New York is one of the most developed First World countries in the World, known as the trend setter of modernisation, urbanisation, development and innovations. Featuring beautiful monuments, Statue of Liberty, Times Square, shopping streets, rooftop bars and restaurants New York is dream come true destination for all. What makes it stand out is the presence of array of and sky touching buildings. Standing with great splendour, these buildings have made the city skyline of New York look absolutely stunning. Here is a comprehensive guide to New York tourism-City of skyscrapers or Empire City.

Why is New York Known as the City of Skyscrapers?

Owing to the presence of array of lofty high-rises, city of skyscrapers nickname is given to none other than New York. Many of the tallest buildings of the World are located in New York like One Trade Centre, Park Avenue and Empire State Building etc. Besides being one of the cities with most skyscrapers in USA, New York is one of the most popular holiday destinations in the World. Showcasing best of nightclubs, rooftop bars, fine dining restaurants and high-end shops and fashion outlets, New York leaves no stone unturned to entertain and amuse you. Owing to all these resources and wealth and never-ending amusement options, New York is aptly described as ‘city of empire state’ and ‘city that never sleeps’.

New York is known for its sky touching buildings, their grand architecture, style and design. Take a look at some of the famous tall structures in New York, that have made it so popular in the World:

Must Read: 10 Destinations In U.S.A For That Perfect American Honeymoon!

Locally called the ‘matchstick building’ 432 Park Avenue is the second tallest high-rise in New York. This is the tallest residential tower in the city of skyscrapers in the world. Other than 104 ultra-posh condominiums for living, overlooking the city of Manhattan, the building also has a private restaurant, a spa, indoor swimming pool and fitness centre for all its residents. Don’t forget to explore this remarkable building on your trip.

Suggested Read: 10 Best Places To Visit In Maryland To Capture The Stunning Views Of Little America

Rising over Bryant Park in Midtown, this super tall building is the eminent head quarter of Bank of America. Along with its stunning architecture, the Bank of America tower is famed for its ecological sustainability standards. This is one of the few buildings in New York, that has their own rainwater reuse system, honey bee hives, green roofing, recycled construction system and on-site cogeneration plant. So, when are you visiting this stunning building?

This is one of the most stylish looking Art Deco skyscraper in Middletown, USA , much famed for its trendy architecture. Featuring shining metal cladding and an ornamental terraced crown, the 77 storied Chrysler Building was one of the primary high-rises built in New York- the city of skyscrapers in the world.

Suggested Read: Brazil In March: Tour The Most Exquisite Places In This Enchanting South American Land!

New York is the city of skyscrapers and Empire State Building is one of the main elements that help to justify this statement. As one of the traditional buildings in the city, Empire State Building is a 102 storied structure, known for its classy architecture and design. Not only offices, Empire State Building also houses restaurants, art galleries, shops and a mesmeric observation deck. This is the first ever building in USA to include more than 100 floors. The building has many decks but special mention should be made about, the 86th floor observatory is an open-air viewing platform and mesmerizes all with its fascinating 360-degree panoramic view.

Further Read: 10 Best Places To Visit In Ecuador To Tour This Megadiverse Country In South America

As one of the cities with the most skyscrapers, the skyline looks amazing and make it stands out from the rest. As an integral part of New York tourism-city of skyscrapers or Empire City, these top 5 high-rises make the city skyline look amazing and stunning. Make sure to see and visit these structures during your trip to USA.