Olkhon Island: A Guide To Enjoy Enthralling Moments With Your Loved Ones! 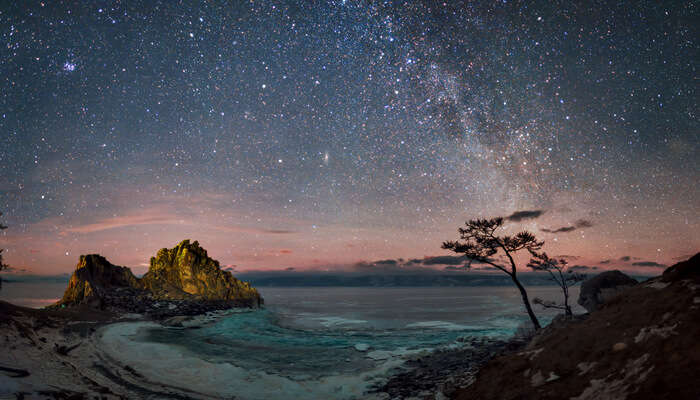 Russia has given great importance to tourism after the Soviet period. It is not only famous for its historical wars but also for its tourist places and beautiful island as well. Olkhon island is the largest lake island and one of the top tourist spots of Russia with less population and beautiful nature.

Olkhon Island is the third-largest lake island in the world. The island consists of steep mountains in which mount Zimba is the highest point of the island with 818 m above the water level of Lake Baikal. The island is famous for its natural sights that attract tourists the most. The population of this island is low. It consists of only several settlements and 5 villages and people there believe the island to be a spiritual place as well.

The island is famous for its beautiful beaches, dense forests, rocks and much more. Here are some interesting facts about the island. Scroll down to have a look.

1. The population of the island is only 1500 which mostly consists of Buryats, the native people.

2. Most of the people are farmers, fisherman or cattle ranchers. Tourism has also become an important part of the economy.

3. The Russian explorers first visited the island in the 17th century.

4. The island consists of 5 villages out of which Khuzhir is the capital of the island and a shelter for 1200 residents.

5. The island has a bit humid yet a pleasant climate in summer and Olkhon Island in winter is the best time to see ice caves and frozen waterfalls and lakes.

Must Read: Try Your Hands On These Fascinating Things To Do In Kazan While In Russia!

Places To Visit In Olkhon Island

Have a look at the top places that you can visit on your Olkhon Island tour. Take note of them because you might need them for your Russian tour.

Due to an increase in tourism, the town has developed many hotels and resorts for its tourists to live in. Out of 1500 residents, 1200 people are staying in this village. Khuzhir village also boasts of its museum that shows the ancient history and culture of the island. The place is famously known for its holiday camps and hotel complexes. You can have sports equipment for rent, markets, shops, beauty salon, etc.

Suggested Read: 10 Best Things To Do In Sochi For A Frolicsome Getaway To Russia This Year!

The main attraction of the island is Cape Burkhan and it is considered as a beautiful place in Asia. The two-headed rock of Shamanka and prayer pillars are located in this village. Shaminists lived on this island from ancient and still some part of the population do worship the spirits and nature here. Climbing the rocks are considered to be unsafe s you may fall and also not good in terms of spirituality.

Khuzhir consists of a collection of histories and cultures items in the museum. It also consists of stone arrowheads, badges of Mongolian soldiers, and materials used in cremation rituals. You can also discover the political history of the island during the Soviet era.

Suggested Read: The Complete Guide To Applying For A Russia Visa For Indians

It is the northernmost part of the island. The rock, according to the Buryats beliefs, was a girl who was punished because of her evil nature. You can have a beautiful view of the sunrise from the point.

Suggested Read: Winter In Russia 2020-21: An All Inclusive Guide To The Real Arrendelle On Earth

Also called three-brother rock, Sagan Khushun Cape is one of the most popular tourist spots on OIkhon Island. According to the Buryat legends, it is said that the three rocks were brothers and they were cursed by their father for not fulfilling the promise. The three rocks are standing in a row facing lake Baikal.
Further read:https://traveltriangle.com/blog/things-to-do-in-russia/

Further Read: 17 Fascinating Places To Visit In Moscow In 2021 That Reflect The Real Russian Beauty!

Mesmerized by the pictures of this island? Get to know more about the Olkhon island and discover the hidden stories of the place. Don’t miss this chance to travel to Russia with TravelTriangle and get a olkhon island map to explore the place with your family and friends.

Top 23 Tourist Places In Kanyakumari 2021: The Land Where The Oceans Meet

Street Food In Ahmedabad 2021: 19 Best Food Spots That You Need To Add To Your List!