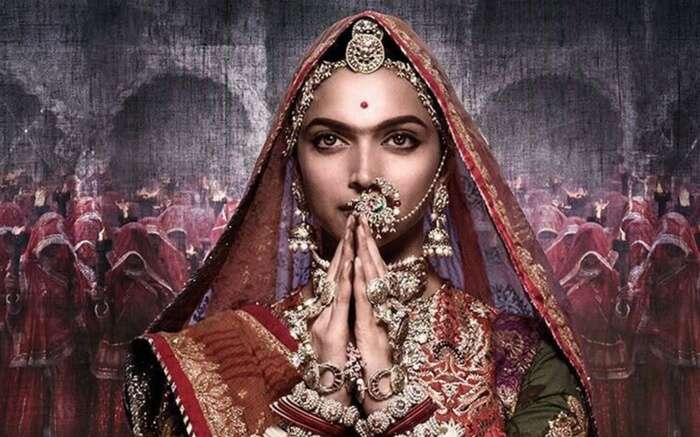 Beauty enchants, beauty propels, and beauty only thrives! Beyond ages, beyond time!
Sometimes it is a legendary figure that becomes a page in the history books and sometimes it is a structure that stands tall depicting the best of a great glorious past. Chittorgarh Fort located in Rajasthan is one such place that continues to fascinate the historians even today. It stands as India’s biggest fort and is a popular UNESCO World Heritage Site.

Image Source
The legend of Rani Padmavati goes along with the palace which can be spotted from the top of 590-feet-tall-hill in Chittorgarh Fort. The perfect altitude and majestic appearance of the fort make it a perfect place from where you can find the uninterrupted views of the Chittorgarh and also the palace where once lived the most beautiful woman of the Rajputana. The Padmavati Palace, located to the South of the Chittorgarh Fort, is also special because of its historical relevance.

Apart from the Padmavati Palace Chittorgarh and the palace of Rawal Ratan Singh, the fort campus also encompasses prominent structures that make for living example of art from the 12th and 13th century. Jain temples, pillars studded with ornaments, Gaumukh reservoir, Meerabai’s temple where she worshipped Lord Krishna, and Rana Kumbha’s Palace – one of the most massive monuments in the fort, are some of the prominent structures that make for the prominent sightseeing attraction in Chittorgarh Fort.

Who was Rani Padmavati or Padmini?

Even words elude while discussing Padmavati – the most elegant queen of Chittor in the history. One can find the beautiful description of the gorgeous queen by Malik Muhammad Jayasi in his poem Padmavati which he wrote in 1540. It is, however, debated that the famous poet’s work was inspired by reality or it was a complete imagination. The charming queen of Chittor has been described by the folklore of Rajasthan as the princess from Sri Lanka who married the Rajput ruler Rawal Rattan Singh and then moved to Chittor.

What made the queen immortal in the history was her flawless beauty, astuteness, and the act of valor. She chose to sacrifice herself rather than falling into the trap of the Sultan of Delhi Alauddin Khilji. Today, Padmavati is remembered in lore and ballads in Rajasthan and one can get to hear interesting stories about her phenomenal life.

Padmini Palace or Padmavati Palace was the royal home of the Rani Padmini known for her incomparable beauty. Tucked in the great Chittorgarh Fort, the palace from 12th century stands out for various reasons which include fine architecture, intricate carvings, and magnificent nature views surrounding the palace.

The lotus pond inside the palace complex stands out for its striking beauty. It is said that it was here at the pond that Alauddin Khilji was allowed to watch Padmavati’s reflection in the lake water. For centuries the Padmavati story has evoked curiosity among historians and travelers from across the globe.

Popular places to visit in Chittorgarh

A trip to Chittorgarh can be one of the most wonderful treats you can give yourself. Though the fort is spread over a massive 700 acres and one must have ample of time to visit the complete fort complex properly. Juna Bazaar, Moti Bazaar are must-visit markets in Chittorgarh. September to March is considered as the best time to visit Rani Padmavati Palace Chittorgarh when the weather conditions are just perfect to explore the fort and surroundings. There are a few attractions in and around Chittorgarh Fort that must be visited when you are in the town.

Suggested Read: 20 Places To Visit In Chittorgarh With Your Friends, Family Or Solo

By air: Udaipur Airport is the closest airstrip located at a distance of 105 km from the Fort. The remaining distance can be easily covered by a private vehicle.

By rail: Chittorgarh Railway Station is 7.5 km from the palace. From the railway station hire a cab/taxi to reach the Palace.

By road: Padmavati Palace is 5 km far from Chittorgarh Fort. It can be easily reached by a rickshaw or a taxi.

Further Read: 15 Best Places To Visit In Rajasthan In November With Pals

The majestic Padmini Palace Chittorgarh from the past is the place where legends have kept their share of story safe and sound. Hence, live the grandeur of the glorious past and try to unravel a few secrets on your next trip to Chittorgarh!

Chitrangad Mori from the Maurya Dynasty is believed to have constructed Chittorgarh Fort in the 7th Century A.D.

Why is Chittorgarh famous?

This city in Rajasthan is essentially famous for Chittorgarh Fort, which is considered to be one of the prominent heritage sites in the world. This fort is known for its historical richness, as there were various major events that happened in and around this fort.

Who was the last ruler of Chittorgarh?

The last Siege of Chittorgarh came in the year 1567 after 33 years after the Mughal Emperor, Akbar’s attack on the fort.

Is Chittorgarh Fort Worth Visiting?

Yes, your visit to Chittorgarh Fort will be simply worthwhile. It is the largest fort in the whole continent of Asia.

How old is Chittorgarh Fort?

Established during Rawal Kumar Singh’s rule (1179-1191), this fort is one of the most prominent heritage sites in India. The fort was ruled by 3 major sieges in the years 1303, 1535, and 1567. The fort is well known for its historicity and a must-visit site for those who claim themselves to be history buffs.

How can I go from Udaipur to Chittorgarh?