Paragliding In Greece: Head To These 5 Places To Glide In An Excited Tandem 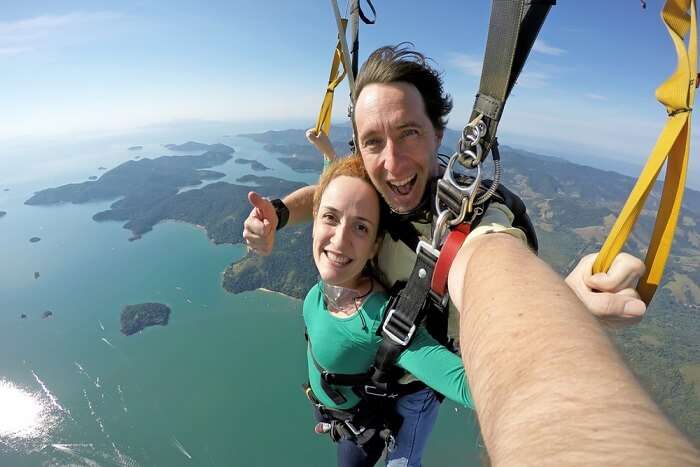 Located in the southwestern part of Europe, Greece is a large group of islands that are scattered all over the Aegean Sea and the Ionian Sea. Greece is often called the cradle of western civilization. Today the country is a popular tourist spot. The islands offer various adventure sports and entertainment. Paragliding in Greece offers you with the stunning view of the islands. Most of the paragliding is done on the islands than on the mainlands.

Best Time For Paragliding In Greece

The best time for paragliding here would be February, March, April, October and November. During these months of the year, the winds blow in favour of the adventure sport. Thus the spring and the autumn season are best for paragliding in Greece. The skies are also very clear during this time, so the blue of the sky adds to the experience.

5 Places For Paragliding In Greece

Greece has an array of places where you can enjoy paragliding. As it is a medium of sightseeing, you should not miss out on it. Some of the best paragliding sites are given below.

At the Kefalonia island of Greece you can take the paramotor glider, which is a motorised paraglider that will take you all over the island and you get to admire its amazing beauty. Most of the flying is done over the beaches of Paliki, and Lixouri. The beauty of the island and the blue waters around it is magnificent. There are special lessons that are given to those who are inexperienced with the concept of paragliding.

Must Read: Greece In December 2020: A Guide To Explore The Gem Of Aegean Sea During Winters!

Santorirni in Greece is very well known for its clear blue waters and water sports. It is not surprising that the major recreational sports here are all related to water. Parasailing is the form of paragliding done here. It is an exhilarating experience as you glide over the breath taking beauty of the place. You fly over an altitude of 350 feet while trailing along with a boat that has been specifically built for parasailing. This is an experience that you must not pass up. In case you are worried about your lack of knowledge in parasailing, there are short classes held that will help you get over your fear of inexperience.

For those who love the adrenaline rush in your body, you must visit here and try paragliding over the island of Corfu. The paragliding here is done from jumping off cliffs – the major cliffs where these activities take place are Agios Gordis which is 18 kilometres from the Corfu town, Myrtiotissa which is next to the Glyfada beach, Pelekas, Troumbeta, Agios Stefanos, and such others. The scenic beauty here is breath taking. You will be missing out a lot if you do not visit here at least once.While going for paragliding, if you are inexperienced you can try out the numerous groups here who will give an elementary walk through of the matter.

Anyone can paraglide here. There is no bar on age of the person or the weight of the person. In case you do not have any knowledge of paragliding, then too you do not have to worry. If the wing conditions are right then you get to glide over the blue seas that surround this island. You will have a pilot along with you who will guide the glider in the air. The passenger generally gets to sit in front of the pilot. During the flight you can take pictures and videos, or simply enjoy the entire flight. Most paragliding flights are of duration of 15 to 20 minutes.

This is a beach located on the Ionian sea and is a part of the Epthanisa island complex. There are mountainous villages, picturesque and lush nature to admire everywhere. It is the haunt of extreme sports. There are experienced instructors who will guide you while you take the flight. The take-off altitude is generally 130metres. The best considered wind conditions are west north west and south west.

Further Read: 10 Hotels in Greece That Are A Treat For The Senses!

These are some of the great locations one could visit if they wish to try Paragliding in Greece. Have a great time exploring these options and make great memories during the trip. So go ahead and pack for your Greek Holiday and make the most of the paragliding option there. Great Travels!

What are the top places for paragliding in Greece?

There are multiple sites in Greece that are quite popular for paragliding among tourists, namely Kefalonia, Santorini, Corfu, Lefkada, Pefkoulia, and many more.

Where can you paraglide in Kefalonia island of Greece?

Kefalonia island of Greece is quite famous for paragliding for several years. Most of these activities take place in the Paliki and Lixouri beaches of Kefalonia island. You will be able to take part in the motorized paragliding out there.

Can one take part in paragliding in Santorini?

Technically Santorini in Greece do not accommodate paragliding, but they do allow its guest to take part in parasailing. It is different from paragliding by the fact that it is done above the sea while paragliding in done amid the mountains.

Where can one go paragliding in Corfu in Greece?

Corfu allows tourists to do paragliding by jumping off cliffs. The significant cliff where all the actions happen is located in Agios Gordis. In Corfu, you will get to experience the authentic feeling of paragliding.

How long does a paragliding session last in the Lefkada beach of Greece?

A session of paragliding usually lasts around fifteen to twenty minutes. You will be able to participate in the activity even if you are inexperienced out there.

What is the best time for paragliding in Greece?

Paragliding is hugely dependent on the direction and flow of the wind. Hence you will get to do paragliding smoothly if you visit Greece during February, March, April, October, and November. During those months, the wind flows nicely, and you will also get fantastic weather that is quite essential to paraglide safely.

How much does a session of paragliding cost in Greece?

You will be charged with an amount of 100 euro for a session of thirty minutes of paragliding in Greece though you will need to have a bodyweight of fewer than 110 kilograms to be eligible for the flight.