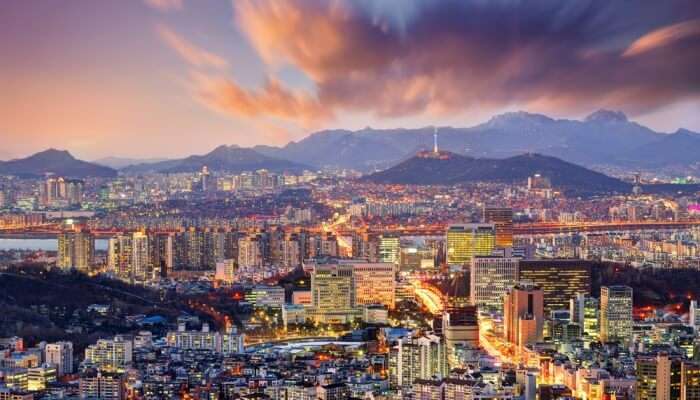 Housing a metropolitan population of over 25.6 million, Seoul is, in every sense, the largest city to exist in Korea. The city is East Asia’s financial and cultural nucleus and houses an intriguing amalgamation of cutting-edge technology and ancient traditions. The city is home to countless street food vendors and a pulsating nightlife. From tranquil Buddhist temples and exquisite architecture to never ending rows of monotonous grey apartments, Seoul is a displayal of stark contrasts and peaceful coexistence. Over the years, the city has managed to attract a major tourist turnout due to the ever growing popularity of the Korean Wave, Hallyu. The trend setting youth of the city known for crushing conformism, Seoul is a city that never rests. Eventhough, the city is stocked with ravishing getaways, One will still find a lot of places near Seoul that are equally entrancing.

10 Places Near Seoul To Visit

Besides a cornucopia of ventures offered by the city to indulge in, there are many places bordering the city that travelers can uncover. In this article, discover 10 places near seoul that one can visit for a fun-filled excursion.

With the opening of the Incheon Port, Incheon’s Chinatown came into existence in 1883. The residents of the city belong to the 2nd or 3rd generations of early Chinese habitants. The area is a living embodiment of Chinese culture, celebrating the very essence of China. Travelers can enjoy the tasteful delicacies while traversing the Street of History and Culture, festooned with Japanese style architecture. Travelers willing to explore the vicinity of Seoul, Incheon’s Chinatown surely tops the list of beautiful places to visit near Seoul.

In December 1997, Hwaseong Fortress was declared as a World Heritage site by Unesco. The marvellous fortress is symbolic of the 18th century’s Joseon Dynasty. The architectural masterpiece was constructed in order portray king’s piety towards his father. Initiate your climb from the southern Paldalmun Gate, positioned right in the heart of the fortress. The primordial crescent shaped structure is surrounded by a vibrant marketplace which comprises of restaurants and modern outlets.

Established with the mindset of preserving the Korean culture and exhibit it to the populace that is unfamiliar with the traditional roots, the Korean Folk Village was fabricated in 1974. A visit to the Joseon Dynasty village will surely take you back in time. Witnessing the traditional Korean folk customs firsthand will make you gain some intrinsic insights about the Korean civilization. The Korean Village has been featured in some of the most popular Korean variety shows such as “Running Man” and the sensational drama “My Love From The Star”.

Travelers yearning for a fun-filled beach escapade can visit the Muuido Island, Situated in the Incheon Province, West of Seoul. The isle is visible from the Incheon International Airport. The island is an idyllic retreat for travelers willing to take a break from Seoul’s hustle-bustle. It is one of the must visit places near seoul korea. Explore the alluring islet located two hours away from Seoul.

Hwanseongul is a heavenly retreat for travelers willing to take a break from the city’s busy life.
The limestone cave sprawls across a distance of 6.5 km and is known to be the largest cave in Korea. The cave is adorned with pleasant waterfalls and lakes. You can hike to the entrance or take a monorail instead. For travelers planning to visit Korea on their next holiday expedition, this place is a must visit!

Hailed as Korea’s largest terrestrial retreat, Jirisan is sure to mesmerize one’s senses. It is situated on the borderline pf Jeollanam-do, Jeollabuk-do and Gyeongsangnam-do. In 1967, Jirisan was the first park to be coined as a national park in South Korea. The park is renowned for enclosing the famous conservation programme on the Asiatic black bear.

Suggested Read: 9 Most Electrifying Seoul Festivals To Be Explored In 2021

Established on 2 April, 1983, The Bukhansan National Park is one of the most preferred pastimes. The park constitutes forested areas, granite peaks and forested areas. The park has managed to draw over 5 million hikers and rock climbers on an annual basis. Covering a distance of 80 sq km, the park is only 45 minutes subway rides away from Seoul. The park is divided into two parts, Donog-san area in the north and Bukhan-san area in the south. Travelers considering to hike through the grassland should definitely bring loads of water!

The Dolmen sites in Korea are categorized into three different regions: Hwasun, Ganghwa and Gochang. Ganghwa Dolmen Heritage site encompasses a total of 120 dolmens, majority of which possess a Northern Style, comprising out of gigantic pieces of stone, 2.6m in height and 7.1 m in length. The Ganghwa site was labeled as a UNESCO World Heritage Site on November, 29th 2000. Travelers can enjoy a beguiling view of the heritage site.

Suggested Read: Rejoice Your Hearts By Shopping In Seoul On An Excursion To South Korea

The Cheonjeyeon Falls comprises of three individual waterfalls that flow down from a cave high above in Seogwipo forest. The first waterfall cascades from the highest point of the trail. The next cascade ascends into the river from a height of 30 meters hitherto flowing into the sea. The foliage surrounding these waterfalls is home for exotic wildlife and subtropical fauna. Follow the walking trail in order to observe the falls from distinct perspectives. It is, in every sense, one of the most heavenly places near seoul station.

Daecheong Lake is regarded as the third largest man made lake in Korea. This phenomenal lake is less than a 2 hours away drive from Seoul and one of the lesser known places visited by tourists. Daechong recreational park is situated just adjacent to the lake and is an idyllic retreat for family expeditions. The astounding driving course offers a breathtakingly beautiful view of the serene lake. Photographers consider the place as a sanctum of aesthetics. The beguiling sites are sure to mesmerise one’s senses.

With a wide range of pursuits bordering the city, travelers are in for a journey of adventure and discovery. So what are you waiting for? Plan a trip with TravelTriangle and unveil these magnificent places near seoul.