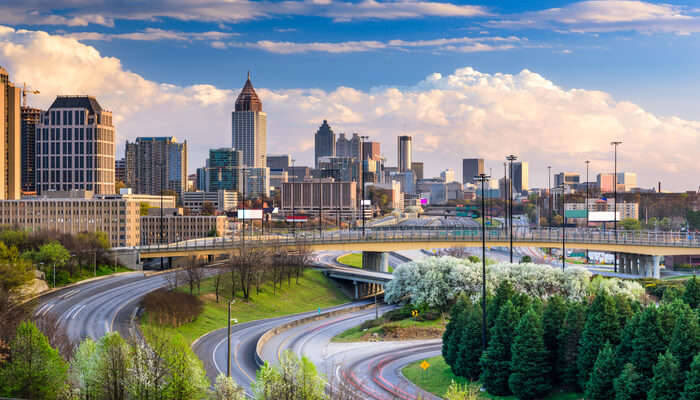 The southern culture with a thin blend of modernism, Atlanta is one of the most evolutionary cities. You must have watched that blockbuster movie, Gone With The Wind, that made famous certain manners and cuisines of the place. The trip to Atlanta would give you an amazing experience of what you watched in that movie. Atlanta is the oldest city and the capital of Georgia. It has become one of the busiest and crowded economic and cultural centers in the world. The full-fledged growing Down Town, the atmospheric increasing music industry and the three most beautiful sky liners, making it a city to be visited once. Shopping hubs, food markets, attractive architecture, and a lot of peculiar things make Atlanta one of the most desired cities of the USA by the tourists.

Best Places To Visit In Atlanta

Atalanta is one of the most sought after tourist places because of the wonderful establishments, and constructions take the city to possess. Let us have a look at some of the best places you can visit here.

Georgia Aquarium is one of the most popular tourist attractions in Atlanta. It features several marine life. Before the aquarium of Singapore, Georgia Aquarium was considered as the largest aquarium in the world. Though it has the honor of being the largest in the Western Hemisphere. Some of the rare water species call this aquarium their home. This aquarium is divided into five ecoregions which consist of tropical reefs, arctic waters, freshwater rivers, open ocean, and large marine mammals. Here you can spot more than 100,000 aquatic creatures, including some of the largest whales and sharks. A unique thing is offered here to dive or snorkel in the tank. If you want to participate in the diving program, you must have a Scuba diving certificate. For people who do not want to get wet, this aquarium offers an acrylic tunnel to walk and view fish. A fun fact about this place is that it has more than a million gallons of water pumping through its exhibits

Must Read: 12 Places To Visit In California: A Short Trip To Experience Miniature America In 2020

The Atlanta Botanical Garden is another popular place where the majority of tourists visit. It is located adjacent to Piedmont Park in Midtown Atlanta. This garden has occupied an area of 30 acres which was constructed in 1976. The garden has a mission to preserve nature by protecting and collecting some rare plants and trees. It has several different sections and each one highlights different areas, plants or animals. The Japanese garden, a rose garden, and a children’s garden are some subparts of this park. This park is often visited by schools and colleges for an educational tour. The spring season is the best time to visit here. At this time, the surrounding area of the park blooms with colors. It is a special garden for children and families. Botanical Garden offers several exhibitions and charity events. The most notable event which was held in this park is Dale Chihuly in the year 2004. In this event, almost half a million guests became a part. Nearby the garden, you can get some local foods of Atlanta which will refresh your mind.

Suggested Read: 10 Brazilian Desserts To Satiate Your Taste Buds In This South American Wonderland In 2020

The Martin Luther King Jr Historic Site is a historical tourist attraction. It is known as the birthplace of King Martin Luther. This site is located in West Potomac Park near the National Mall, Washington D.C. For a public, it was opened on August 22, 2011. This place has covered an area of 4 acres. Here you can spot several buildings like the boyhood home of civil rights leader and the church where his (Martin Luther’s) father and he too came first to preach. Some of the other buildings are the firehouse (once a community center for civil leaders) and the rose garden. A tourist can see a large mural depiction in Martin Luther’s life. Within the site, there is a large sculptor of Martin Luther, which is called the “Stone of Hope.” There are many events and festivals organized at this place. Some famous events are Martin Luther King Day and Black History Month. If you want to research or have an interest in history, you can visit this place anytime.

Suggested Read: Castles In Texas: 6 Amazing Castles You Must Visit To Experience The American Royalty!

The Fox Theatre in Atlanta attracts thousands of tourists per year. It is situated in Midtown Atlanta, Georgia. It was built in the 1920s as the Yaarab Temple Shrine Mosque designed with an Arabian theme. The Fox Theatre has an interesting history. In the starting, it was originally planned to make Moorish architecture Shrine Temple. But it developed as a lavish movie theatre and became a performing arts stage. It has included in the list of the National Register of Historic Places. The theatre is much older and some construction works usually happen to maintain the existence of the theatre. Within the theatre, there are two ballrooms, the Egyptian Ballroom, and the Grand Salon. These ballrooms are specially made for special events. A lot of events take place here every year.

Location: 660 Peachtree Street NE, Atlanta, Georgia
Entry Fee: Depends on the show
Timings Most of the time this theatre remains open for 24 hours.

Suggested Read: Niagara Falls in Canada: A Guide To A Majestic Waterfall In North America

Founded in 1926, Atlanta History Center is a large complex which comprises of the Atlanta History Museum, Swan House, Smith Family Farm, Centennial Olympic Games Museum and Kenan Research Center. It is situated in one of Atlanta’s most vibrant communities where the stories and mysteries of the region thrive. This museum shows some exhibitions and collections of interesting things like the American Civil War, Folk Art of the South and various others. Within the museum, there is an apartment called the Margaret Mitchell House. There are six gardens which all include natural beauty and a peaceful environment. The Frank A. Smith Rhododendron Garden gives a scenic view in the winter season.

Piedmont Park is the oldest and largest park in Atlanta. It is located at a short distance from downtown Atlanta. The grounds of this park have a significant history. During the civil war, the grounds of this park served as the battleground at Peachtree Creek. It offers a large space for walking and running. You can get several places within Piedmont Park like dog parks, gardens, sports fields, lake, swimming pool and children’s playgrounds. At the Green Market near this park, you can get some fresh peaches, handmade soaps, smoked meats, Irish pancakes, sheep cheese, and sheep milk caramel. From April to November, on Saturdays, a free guided walking tour is offered. On this tour, you can feel witness natural beauty and calmness at its best. Many tourists who have visited this park, calls it “a little piece of peace in the city.” Some others said that it is very much similar to Central Park in New York City.

Oakland Cemetery is a historic tourist attraction in Atlanta. It is one of the largest cemetery spaces in Atlanta. It was founded in 1850 covering an area of 6 acres in the southeast part of the city. During the Civil War, this site was accommodating the killed people on the battlefield. In the year 1976, Oakland Cemetery became a National Historic Landmark. In the same year, The Historic Oakland Foundation was also established. At present, Oakland Cemetery is promoted as a historic cemetery and parklands which includes gardens, sculptures, and wildlife. Within Oakland Cemetery, there is a Visitor Center where visitors can stay for a few hours and a Museum to shop from.

The story behind the making of the world’s most famous beverage, Coca Cola, is very interesting. Dr. John Pemberton, a chemist, in 1886, devices a headache relieving syrup. His friend mixed this liquid with water and carbonic acid and the result formed was Coca Cola. The place called The World of Coca Cola displays the Victorious epoch of Coca Cola in a very interesting and entertaining way that pleases people of all ages. You can see the Ads from 1800 onwards. You can also go to the 4D movie experience. One can visit the tasting room and see how the Coca Cola is made. This place in Atlanta is a must to visit.

It is located in Midtown, which is called the art district of Atlanta. This High Museum of Art was founded in 1905. The High Family, in 1926, donated their family home for this museum. It is named after them. In 1983, a brand new building was made by the artist Richard Neuter, to house this gallery. From the artworks of the European, American and African painters from the 19th and 20th centuries, find their place in this museum. Renaissance arts can also be seen here in abundance. This museum features independent and classic movies also. One cannot refrain from visiting this place.

Further Read: 10 Best Things To Do In Brazil For A Wild & Unforgettable South American Sojourn

From arts to sports, the tastes of the tourists have all the things for the scenic beauty of the place. This place is America’s heart. There are museums, beaches, historical sites and many other places to visit in Atlanta. Plan a trip to USA and visit the best places in the city on your vacation.

Frequently Asked Questions About Places To Visit In Atlanta

Q. Which are the most popular tourist destinations of Atlanta?

A. Atlanta is one of the most visited cities in the US for a holiday vacation. Several tourist destinations in Atlanta attract people. Georgia Aquarium and World Coca-Cola are the two places that are mostly visited by the tourists.

Q. How is the weather of Atlanta?

Q. How to get to Atlanta?

A. Atlanta is one of the busiest cities in the US. The easiest way to visit Atlanta is by MARTA. It is a public transportation system in Atlanta. MARTA operates both railways and buses throughout the city. You can also book a private cab to reach Atlanta.

Q. Is accommodation expensive in Atlanta?

A. You can get both types of hotels in Atlanta-expensive and cheap. On an average rate of $144, you can get super accommodation nearby hotels in Atlanta. Some of the best hotels are Four Seasons Hotel, The Ritz-Carlton and The St. Regis.

Q. What are the famous things to buy in Atlanta?

A. Atlanta attracts many tourists through its rich collections of local gifts and foods. Some of the popular things which you should buy in Atlanta are Heirloom gifts, snow globe, pickled peaches, and CACAO chocolates.

Q. What is the best time to visit Atlanta?

A. The best time to spend your holiday in Atlanta is from March to May. At this time, Atlanta organizes some popular concerts and activities.

Q. What are the famous local foods in Atlanta?

A. There are several popular local foods which you must try in Atlanta that are Barbecue pork, cheese straws, San Gennaro pizza, Chicken Wings, peach sliders and fried chicken.

12 Places Near Kanyakumari For The Perfect Weekend Getaway In 2020

15 Exciting Places Near Dandeli That You Must Visit In 2020