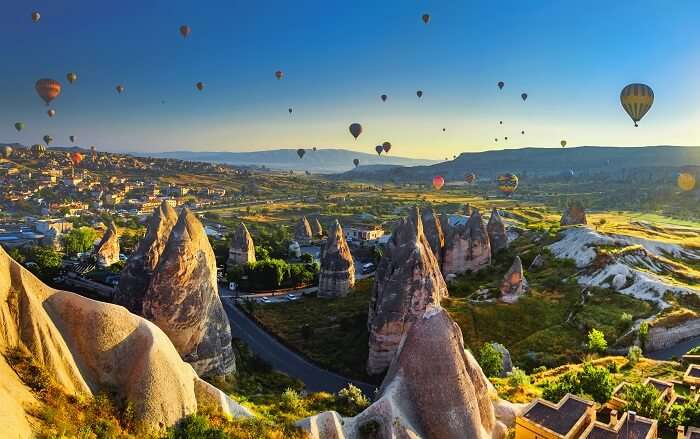 Of fairytale charm, traditional cuisine, and offbeat places, the heavenly beauty of the landscapes make Cappadocia a favorite among travelers from all around the world. Once a province of the Roman Empire, Cappadocia is indeed an incredible place crisscrossed with valleys and dotted with dramatic rock formations. From an awe-inspiring underground city to breathtaking skyline vistas, this city offers an experience that feels nothing less than magic. And to discover the true charm of this Turkish beauty, update your travel wishlist with these best places to visit in Cappadocia to enrich your overall experience.

12 Best Places To Visit In Cappadocia

Check the best places that you should definitely visit while you are on your trip to Cappadocia. Keep scrolling down and read along! 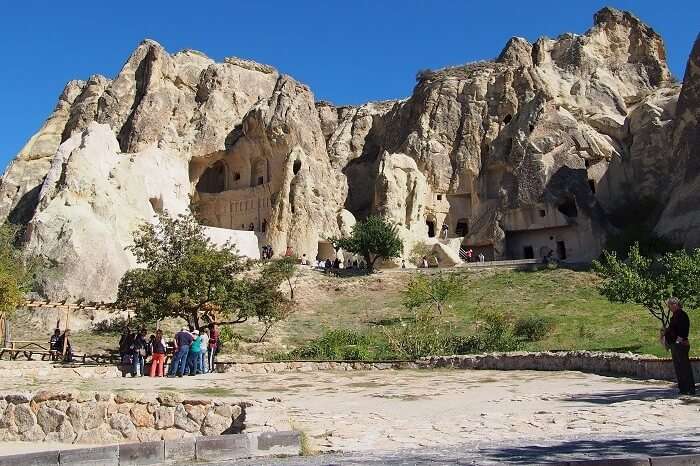 The Goreme Open-Air Museum is considered to be one of the best places to visit in Cappadocia. This museum resembles a vast monastic complex composed of refectory monasteries placed side-by-side, each with its own church. Also, the Goreme Open Air Museum has been a UNESCO World Heritage Site since 1984 and was one of the first two UNESCO sites in Turkey. 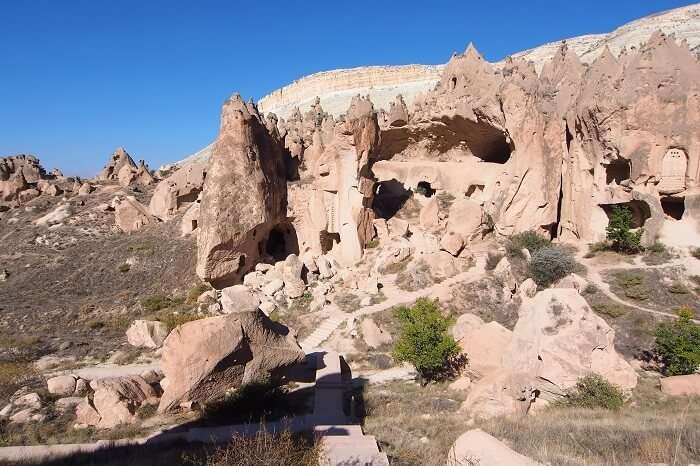 The Zelve Open-Air Museum once housed one of the largest communities in the region and is an amazing cave town, combed with dwellings, religious and secular chambers. Known to be one of the well-known Cappadocia attractions, the real joy of this museum is while meandering down the cliffside paths, exploring the fire-blackened interiors of the cave dwellings, and staring out at the brilliant vistas at the surrounding countryside. 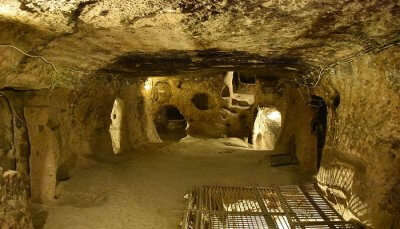 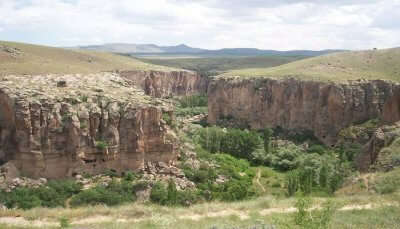 In any of the Cappadocia travel guide, do not miss out on Ihlara Valley which is one of the important Cappadocia tourist attractions that attracts visitors for its tall poplar trees and fertile farming plots. During the Byzantine period, this was a favored retreat for hermetic monk communities, who carved churches and monastery complexes into the cliff face. The Kokar Kilise (Fragrant Church), Yılanlı Kilise (Snake Church), and Kirk Dam Altı Kilise (St. George Church) are three of the best which cannot be missed. It is also believed that the valley housed more than 4000 dwellings, 100 cave churches decorated with frescoes and about 80,000 people. 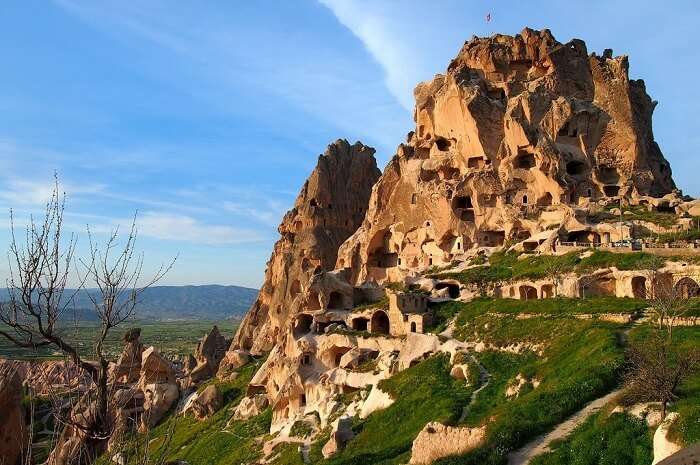 Among many places to visit in Cappadocia, Uchisar Castle is a fascinating one. This castle is situated at the highest point in Cappadocia on the Nevsehir-Goreme road and is just about 5 km away from Goreme. Travel to the top of the Uchisar Castle and witness a magnificent panorama of the surrounding area with Mount Erciyes in the distance. 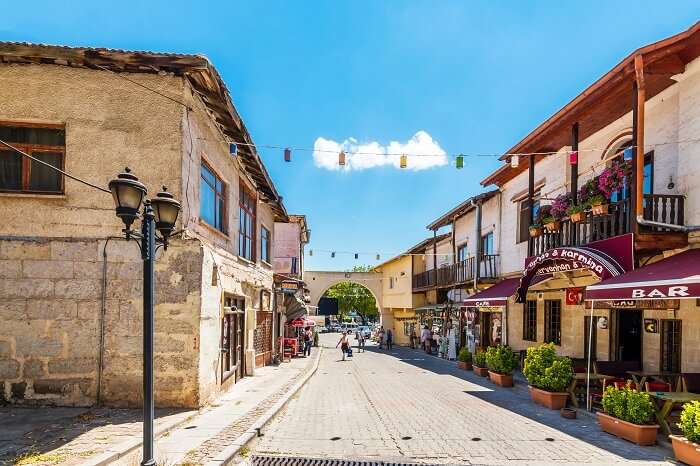 Set on the banks of the Kizilirmak, the Red River is the town of Avanos. Famous for its markets, this is one of the top places to visit in Cappadocia. Based at about 8 kilometers from Goreme, Avanos has a lively center with all the usual amenities including a modern, and a tourist-oriented hamam, i.e., a Turkish Bath. 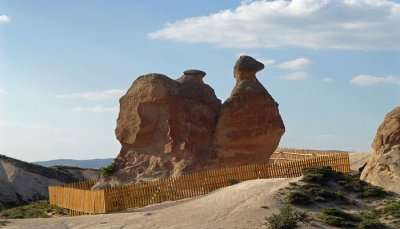 Devrent Valley, popularly known as Imaginary Valley and also as the Pine Valley, it is one of Cappadocia sightseeing attractions. The small fairy chimneys in the valley form a lunar landscape, or moonscape, by their strange look and thus are called the “Lunar Landscape”. The valley also has many animal shaped rocks that look like a sculpture zoo made by nature. If you are looking for places to visit near Cappadocia, then you add this on your bucket list. 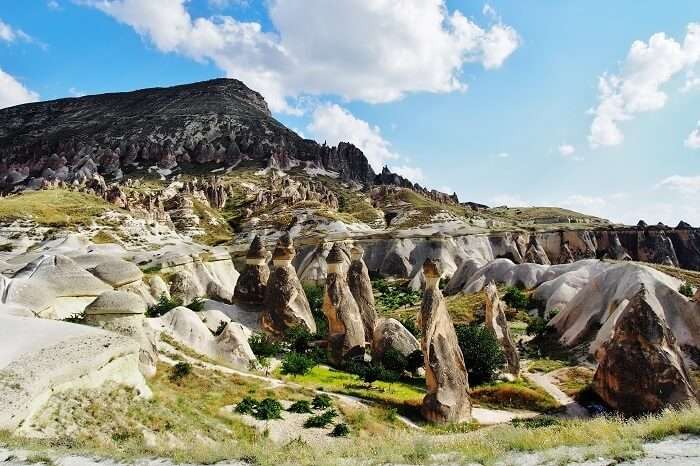 Among the many places to visit in Cappadocia, Pasabag is one which you should not miss. This beautiful valley is located on the road to Zelve while coming from Goreme or Avanos. In the middle of a vineyard, you can see remarkable earth pillars. The name Monks Valley was derived from some cones carved in tuff stones which stand apart even today. 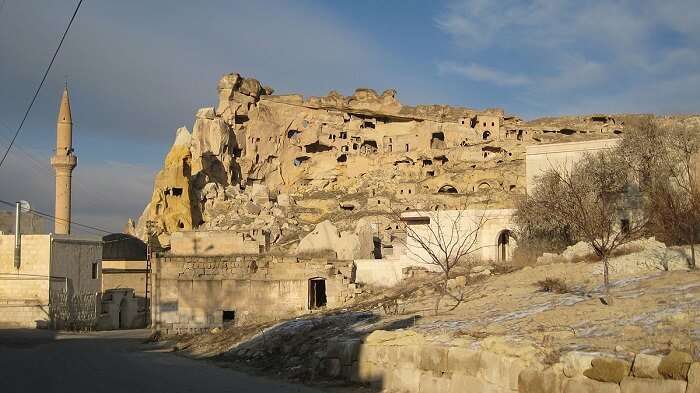 Planning a Cappadocia trip? Do not forget to visit the village of Çavusin where you can witness two lovely Byzantine churches. The moment you entered the town, you will witness the Çavusin Church with an awesome interior of frescoes. After hiking high up on the ridge above the tumble of derelict houses, one can visit the Church of St. John the Baptist which is thought to be the oldest church in Cappadocia. 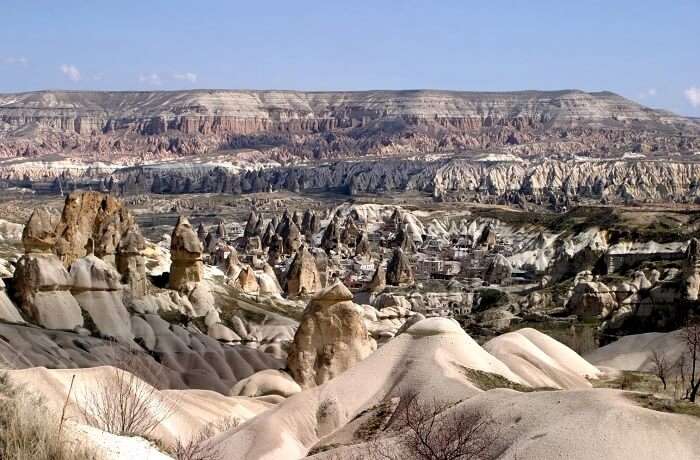 Another gem of Cappadocia is the intertwined Red Rose Valley which lies between the villages of Goreme and Cavusin. The valley is layered with arched rocks in different hues of pastel pink, yellow and orange cliffs which are formed by volcanic eruption and wind and water erosion. Apart from its undaunted beauty, these valleys are a paradise for the hikers as there various adventurous trekking trails. 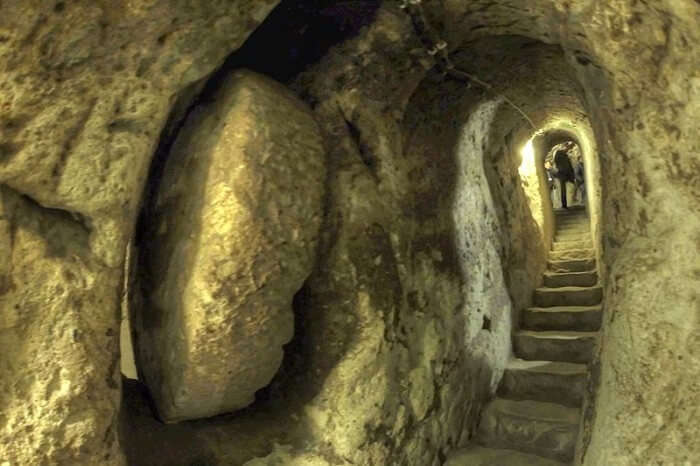 Looking for the best places to visit in Cappadocia, Turkey? Located in the Derinkuyu district in Nevşehir Province, Turkey, Derinkuyu Underground City is one of the best places that all tourists should definitely visit. It is the deepest underground shelter and was used by the Christians to hide from the attacks. This cave has narrow lanes which you can easily explore as the place is not known to many and is less crowded. 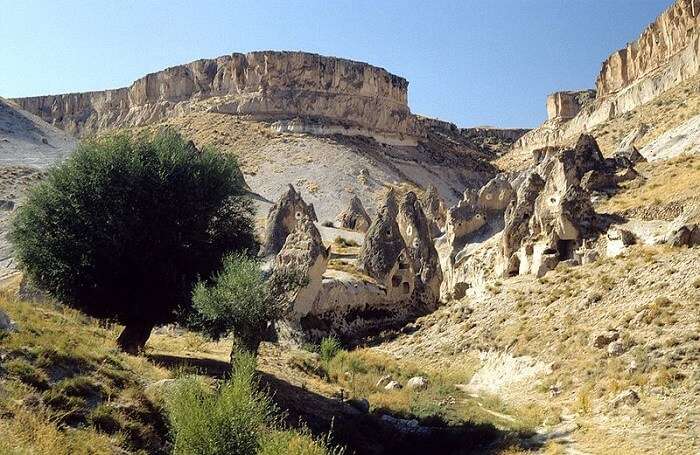 Located in the Yeşilhisar district, Soğanlı Valley is counted among the most famous places to visit in Cappadocia, Turkey. This valley is quite popular for its ancient historical sites, chapels and monk cells. Once you explore the valley you will witness three pristine chapels named Karabas Kilise, Yilanli Kilise, and Sakli Kilise. Don’t forget to explore the serene villages and roam around the valley!

A trip to Cappadocia sounds like a great plan? Then plan your Turkey holiday and enjoy the best of Cappadocia sightseeing that will make your vacation, a totally hassle-free affair. Let your friends know about it too!

Frequently Asked Questions About Places To Visit In Cappadocia

What is Cappadocia famous for?

How Cappadocia was formed?

The geological formation of Cappadocia has happened after years of erosion, volcanic eruptions and soft stones which is a result of compressed volcanic ashes.

What are the fairy chimneys?

The fairy chimneys are a surreal landscape of carved-out towering rock formations which change color with every sunset. These are the results of extensive erosion and volcanic eruptions which took place for million years.

Which is the nearest airport from Cappadocia?

Kayseri Erkilet Airport located in Kayseri and Istanbul Ataturk airport in Istanbul are the two nearest airports from Cappadocia.

What is there to do in Cappadocia?

Some of the most famous and exciting things to do in Cappadocia include: – Hot Air Balloon ride – Hiking in Fairy Chimneys in Cappadocia – The Turkish Dinner & Dance Show – Cooking lessons for traditional Turkish food – Staying in a cave hotel in Cappadocia – Exploring the Gerome Open Air Museum – Horseback riding in the Cappadocia valley

How many days should I spend in Cappadocia?

3 to 4 days is quite enough for exploring Cappadocia to the fullest and indulging in all the experiences it has to offer.

What is the best way to get to Cappadocia?

The fastest and most convenient way of reaching Cappadocia is by flight. You can take a flight to Cappadocia from the Kayseri Erkilet Airport (ASR) in Kayseri and take a taxi or bus to cover the rest of the distance.

Is it safe to visit Cappadocia?

Cappadocia is considered to be an incredibly safe place to visit for all kinds of travelers, be it solo female visitors or a honeymoon couple. However, one should take certain precautions like avoiding dimly lit roads or secluded areas and keeping an eye on their belongings at all times.

How much is a hot air balloon ride in Cappadocia?

The prices for hot air ballooning in Cappadocia generally range from $100 to $175 per person during the peak tourist season.