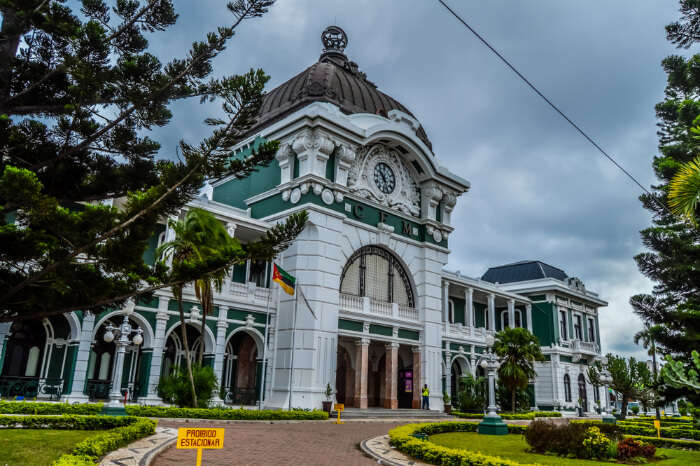 Mozambique is a country in Africa, which is rich in African cultural heritage and it reflects in its food, music, and art. Mozambique generally has a warm tropical climate which suits all tourists. Dotted with beaches, marine parks, the ruins from colonial-era, and fresh seafood, this South African nation is an absolute delight to visit. This scenic country has an extensive coastline and gorgeous white sand beaches that make it a paradise for beach lovers and peace-seekers. An upcoming tourist destination, we’ve shortlisted 12 places to visit in Mozambique on your trip.

15 Places To Visit In Mozambique

There are many interesting places to visit in Mozambique. We’ve shortlisted 15 of them based on their popularity and beauty. Take a look:

Image Source
It is a set of islands located in the Indian Ocean known for its coral reefs, whales, dolphins and endangered sea cows. It has plenty of forts, beautiful beaches, mangrove covered Islands and popular dive sites. There are total of 32 Islands that constitutes the Quirimbas islands. Some of the major islands here are: Vamizi, Ibo, Matemo and Quisiva islands.

Image Source
Various local handicrafts and art is sold here. It brings out and cultural site of Africa. Many local people from the village of Vilanculos come together to sell their work, it is also a source of livelihood for these people. It is a famous tourist destination for all the international tourists and is a must-visit. Most of the things here are made of recycled materials.

Must Read: A Comprehensive Mozambique Travel Guide: When To Visit And Where To Go

Image Source
It is a church famous for its shape and architecture, which is unique and interesting. With beautifully painted glass windows and unusual exterior, it is sure to leave you amazed. The windows give a beautiful effect. It is also known as the lemon squeezer due to its unusual shape. It is one of the nice places to visit in Mozambique. Even if you are not religious, you should still visit this place for its unique architecture.

Suggested Read: Your Guide To The Picturesque Cango Caves In South Africa

The Inhaca islands have amazing and tranquil beaches. People can reach here by ferry while enjoying the view. You can also go swimming here, relax on the beach while enjoying the view or even take a walk along the seashore. There are also restaurants on the island where you can indulge and have delicious food. Seafood here is a must-try. It is one of the best places to visit in Mozambique, Maputo.

Suggested Read: South Africa In January: A Guide To Help You Kick-Start The Year On An Adventurous Note

The Niassa reserve is the largest conservation reserve in Mozambique. Safaris are conducted so that the visitors can witness the enriching wilderness of the place. There are various animals including lion, leopard and hyenas that are found here. Camping expeditions are also held here regularly. You can also go for boat safaris and canoeing.

Image Source
One of the most famous Mozambique holiday destinations, Bazaruto National Park is for swimming and snorkeling. Why not go out into the sea world, see various species of fishes and even dugong. The people who are not interested in water sports can go for a boat trip and see different Islands. It is a great place to explore the sea life. Located in the protected area of Inhambane Province of Mozambique, the beauty of this place is extraordinary and jaw-dropping. It is one of the most recommended places to visit in Mozambique.

The view from the top of the fort is amazing as one can see the panoramic view of the sea and Skyline. It is a Portuguese Fort which was built to protect their trade route and its remains still stand tall near the oceans. Make sure to drop by here on your trip to Africa. This heritage site is touted to be one of the most popular tourist attractions in Mozambique. Make sure to stop by here to get a glimpse of the history of Mozambique, and by extension, South Africa.

Image Source
It is a well maintained Botanical Garden located in the capital of Mozambique. It is an ideal place to spend quality time with friends and family. It is a 19th century Garden with various species of trees. The calm and tranquil environment makes it a great place to relax and observe the trees. Make sure to drop by here.

Suggested Read: Churches In South Africa: 10 Places Of Worship That Will Fill You With Divine Bliss

It is definitely worthwhile to see the light house and the shipwreck near the shores of the beach. It is not every day that one gets to see a wrecked ship that didn’t dive into the depths of the ocean but luckily, this place gives us the opportunity to see the remains of a ship up close. It is one of the nice places to visit in Mozambique if you love scenic places and ocean views.

Suggested Read: Shopping In South Africa: For A Fancy Affair At The 9 Best Markets & Malls In The Country

This museum is one of the main attractions of Maputo and touted to be one of the top places to visit in Mozambique. It houses an authentic collection of money including historic and modern ones. Even though the building is small, the collection is huge. It has various types of coins and currency of Mozambique from the early ages. It is considered as of the best places to visit in Mozambique, Maputo for history buffs and finance aficionados. Make sure to stop by here to learn about how money has evolved over the years. You will have the time of your life.

Image Source
One can book tours prior to their visit in the elephant reserve. Not only elephants, this place also has zebras, hippopotamus, crocodiles, giraffes and several other wild animals. There are many beautiful lakes in the region. The magnificent scenario along with the rich flora and fauna is the reason why this place is a must-visit.

Suggested Read: 10 Picturesque Largest National Parks In The World That Will Leave You Amazed!

The Museum of Natural History of Mozambique is located in the capital of Maputo. Before being established permanently as the Dr. Álvaro de Castro Museum, it was based in various locations and was originally what was known as a Provincial Museum. Established in 1911, the Neo-Manueline building that houses the museum was originally intended to serve as a primary school before it became what it is and after gaining independence from the Portuguese rule, it was called Maputo Natural History Museum. The museum is home to and displays animals such as giraffes, rhinoceroses, hippopotamuses, lions, etc embalmed.

Located 4 km from the coastline, Nampula is home to several Portuguese architectural buildings in Stone Town. Some of these structures are Fort of São Sebastião, Chapel of Nossa Senhora de Baluarte, Palace of São Paulo and so on. The Palace of São Paulo also comprises a museum. The southern portion of the island is lined with Macuti houses that have thatched roofs. In 1991 the island was named a UNESCO World Heritage Site. The island also has several Hindu temples and mosques since it has now become an urban area.

Benguerra Island is the second largest among the four main islands that comprise the Bazaruto Archipelago. It is popular for snorkeling, rich marine life, fishing, horseback riding, posh resorts and pristine beaches with white sand. As a result of accommodating more than 140 species of birds, in 1971, this island was also turned into a National Park. The three lakes situated in the Benguerra Island are populated by freshwater crocodiles. So, it would be safe to keep your distance.

Mozambique is not only a culturally rich country, but it is also geographically blessed. The climate of the country is the reason for the flourishing flora and fauna. The plethora of unusual places to visit in Mozambique will blow your mind. Explore the culture and traditions of native Africa. Plan your next trip to South Africa and have the time of your life.

Frequently Asked Questions About Places To Visit In Mozambique

Q. What is the best time to visit Mozambique?

A. May-November is when the temperatures are cooler and the chances of rainfall are scanty too. So you can plan a holiday in Mozambique around this time.

Q. How large is Mozambique?

Q. What is Mozambique best known for?

A. Fresh Seafood, Makondo art & craft, secluded beaches, and tropical islands are some of the things Mozambique is best known for.