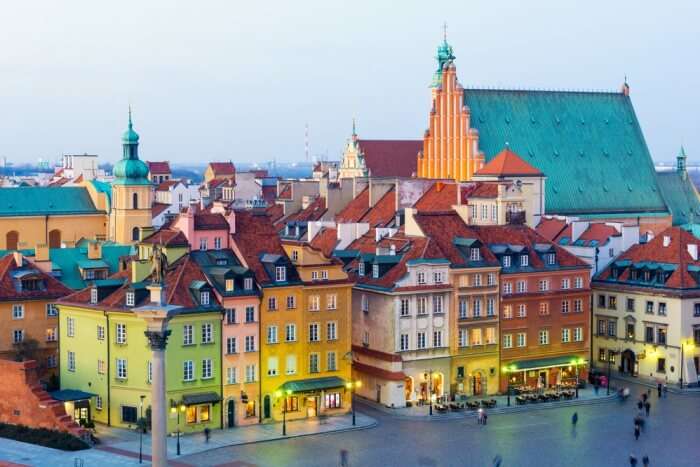 Warsaw is the capital city of Poland and is the eighth most populated city in the European Union. Being the bridge between eastern and western Europe, it is the center of clashing cultures. Warsaw was called Paris of the East before World War 2 and was completely destroyed during the war but the city rose from the ashes. Here are the best places to visit in Warsaw.

7 Best Places to Visit In Warsaw

There are numerous places to visit in Warsaw. Be prepared to learn about the history of Warsaw, see castles and palaces and experience the rich culture: 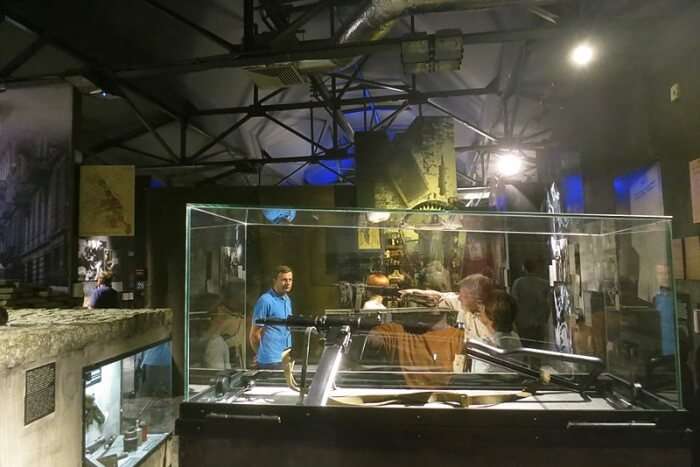 Image Source
Located in the Wola district in Warsaw, this museum which was established in the 1983 and opened on July 31st 2004 is dedicated to the Warsaw uprising in 1944. The museum is open on Mondays, Wednesday and Fridays from 8 AM to 6 PM, on Thursdays from 8 AM to 8 PM, on Sundays and Saturdays from 10 AM to 6 PM and on Tuesdays it is closed.

Must Read: 10 Incredible Things To Do In Warsaw To Enliven Your Spirits! 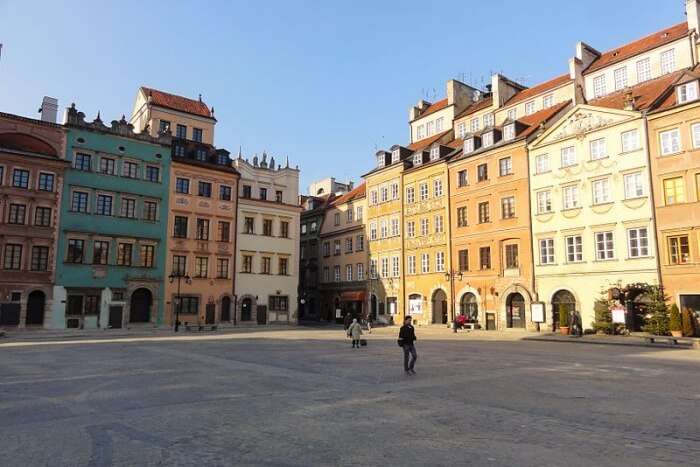 This was the centre of old Warsaw before World War II and originated around the same time Warsaw city was founded. Here fairs were held along with executions. During the war this centre was destroyed. But after the war ended, the houses in this area were rebuilt and look just like the original 17th century. The marketplace now holds numerous cafes, shops and restaurants.

Suggested Read: 15 Best Places To Visit In Poland For A Fun European Vacay 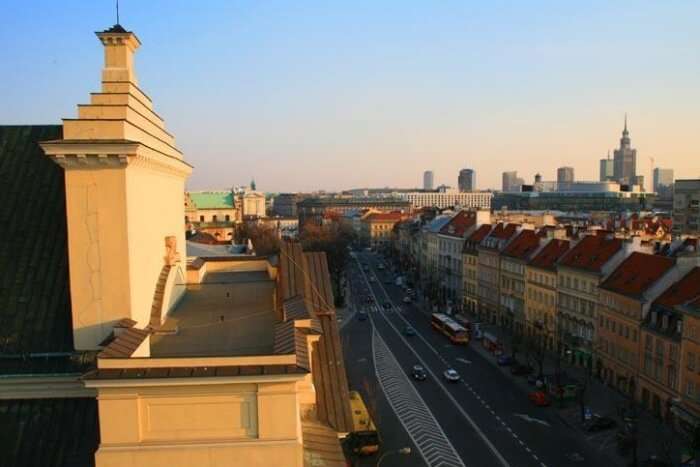 Image Source
This route is also known as Trakt Królewski and is one of the most beautiful routes. It is connected to five different streets. This mile long road starts at the Old town and you can reach Krakowskie Przedmiescie street where historical monuments and buildings are situated: like Nowy Swiat street which has great cafes and bars, Aleje Ujazdowskie where you can see St. Alexander’s Church. 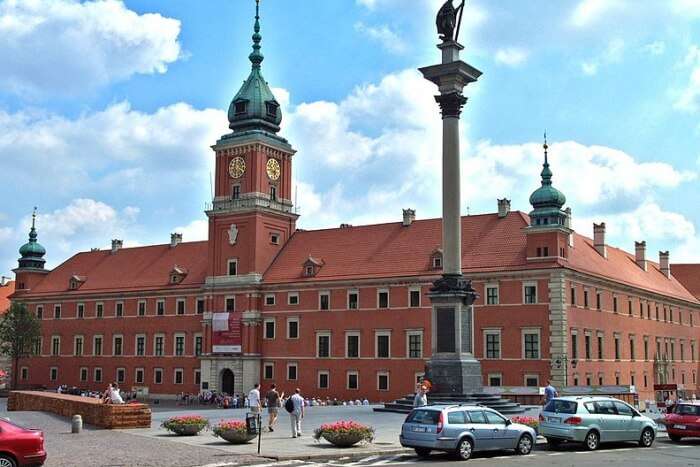 This Castle, located in the old town at the Castle Square, was the official residence of the Polish Monarchs between the 16th and 18th centuries. It was burned and looted during the war and almost completely destroyed later. But it was reconstructed in the 1980s and is now a protected UNESCO World Heritage Site. Inside the castle there is a collection of portraits of the Polish kings.

5. Palace of Culture and Science 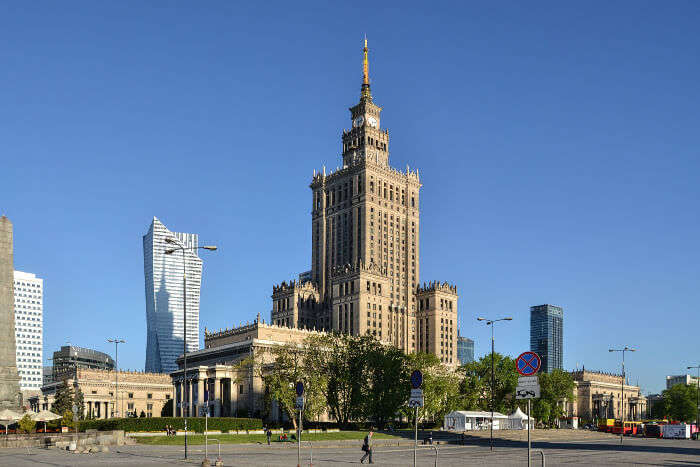 This iconic building was a gift from Stalin and was called Stalin Palace of Culture and Science but the name was changed in the wake of destalinization. It was constructed in 1955 and is the eight tallest building in the European Union and the tallest in the continent. It houses numerous companies, institutions and cultural events such as concerts, theatres, universities, libraries and more. 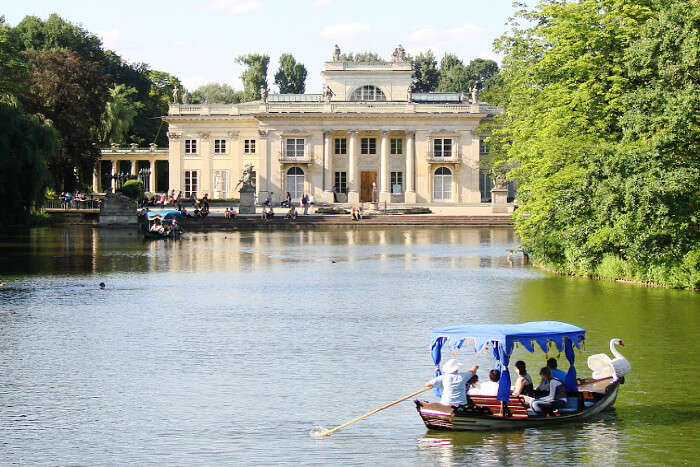 This park, which is located on the Royal Route, is the largest park in Warsaw in Europe and comes under the top 10 places to visit in Warsaw. It is known as the Royal Baths Park and was designed as a baths park in the 17th century. But during the 18th century it was turned into a setting for palaces, monuments and villas. The most prominent building in the park is the Palace on the Isles. 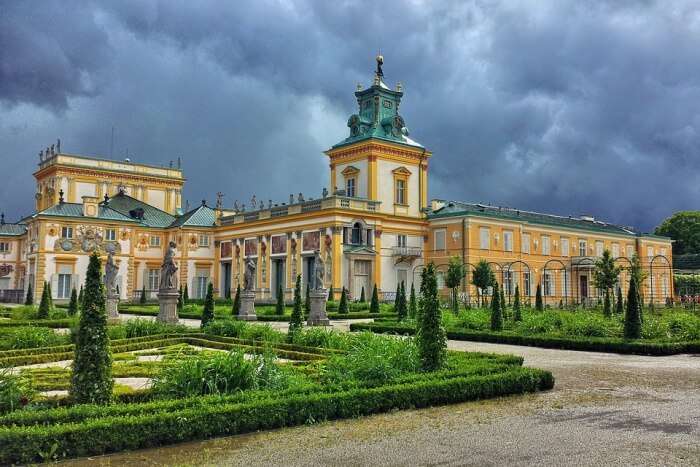 This castle which is located in the Wilanow district was built as a home for king John III Sobieski during the late 17th century. After his death, it was taken over by his son and then later on by rich families who made several enlargements and changes to the place. Unlike the rest of Warsaw, this castle was left untouched. Most of the furniture and artwork which was stolen from the castle was repatriated.

Warsaw has an amazing history and with the numerous historical and cultural buildings around the city. there is a lot to see and a lot to learn from this city. There are also plenty of places to visit in Warsaw. Visit Europe at the earliest to stop by at these places.

Frequently Asked Questions About Places To Visit In Warsaw

Is Warsaw worth visiting?

Warsaw may not be a mandatory addition on a typical Eurotrip itinerary but the Polish capital certainly has some amazing sites. It is an offbeat, charming and laid back city that deserves more attention than it gets.

What should I not miss in Warsaw?

The historic capital of Poland has a lot of amazing experiences that you just can’t miss on your trip. Check them out here:
– Stroll through the Old Town Market Square
– Visit the historical Museum of Warsaw
– Sit by Sigismund’s Column
– Visit the Grand Theatre

What can I buy in Warsaw?

Here are some of the souvenirs that you ought to pick from Warsaw:
– Quintessential Polish Amber Jewelry
– Angel figurines
– Polish dolls
– Lenin garments
– Ceramic crockery or showpieces
– Beer Tankard
– Gingerbread

Is 2 days enough in Warsaw?

2 days in Warsaw would be the perfect itinerary. It is a small city and you can easily cover all the sites in a just a couple of days.

Is Warsaw safe for tourists?

Warsaw is a relatively safe city being a capital city in Eastern Europe. However, tourists should use discretion while traveling around the city.

Do they speak English in Warsaw?

Is Warsaw cheap to visit?

You can easily travel around Warsaw on a budget. It is a relatively cheaper city with a lot of attractions that can be visited for free.