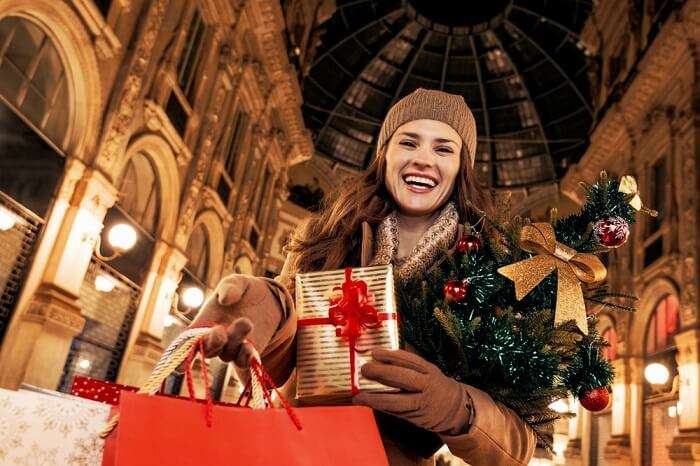 The magical season has almost arrived when the Christmas wreath adorns the door, the reruns of popular holiday movies bring the whole house into the living room and the smell of the gingerbread wafts in the air. The conviction of the kids in the Santa Claus notion of gifts, stockings, and chimneys bind the family in love and appreciation. Before the sweet innocence of the kids wears out let’s find out some of the places where you can meet Santa Claus in Milan during winter and make the holiday even more magical for the kids.

We don’t know if Santa will be available at other locations (his schedule’s pretty tight, you see!) but we can swear by these places for sure!

In the historic area of Milan, Porta Venezia has been a constant venue for many of the public events. From music and theatre shows to art galleries, the Eastern Gate area has been a popular spot for all kinds of exhibitions during Christmas in Italy. A few meters away from this iconic gate is the beautiful Indro Montanelli Gardens. The gardens act as a backdrop to the Casa di Babbo Natale or the House of the Santa Claus as it literally translates to where children can fulfill their excitement of meeting the Santa Claus and handing him over their wish list.

Must Read: Italy In December 2021: Top 5 Places That Take You Through The Best Of This Winter Paradise!

Viridea store is an agricultural company dedicated to the betterment of nature in Italy. A number of its stores can be found spread across the city of Milan. The Garden center store and the one at the Centro II organize events during Christmas in Milan every year. From writing a letter to Santa to wrapping up gifts, Viridea makes sure that the kids are involved with the festival in the most down to earth way. Kids can even make a visit to the house of Santa in the store’s vicinity and get their dreams fulfilled.

The fashion district in lights up during Christmas in Milan as thousands frolic to get their hands on the best items on sale. Areas such as Via Montenapoleone and Via Della Spiga not only house the high-end brands but also features Santa Claus in their stores. One can take their kids to the stores like Tiffany and Co. to meet Santa and listen to his stories while the adults can indulge in some Christmas shopping.

In case the children miss the chance to meet Santa on any of the above-mentioned spots, they can be sure to find not only one but hundreds of Santas in the Annual Babbo Charity Run. It is a 5 km marathon organized every year to raise funds for the treatment of cancer patients. As an act of good during the magical holiday season, people dressed as Santa Claus run across the Piazza del Cannone and enjoy the Christmas in Italy.

How To Reach Milan

Milan is known for its fashion, poise, and finesse in the northern part of Italy. It can be reached either by air or land from any part of the world. Here are some ways to reach the land that hosts the iconic ‘The Last Supper’ painting and the historic Duomo.

By Air: Milan houses three major airports amongst which the Malpensa airport is the anchor to most of the international flights such as Air India and Jet Airways. The Linate and the Orio al Serio Airports are the busiest airports within the city for short-haul flights and low-cost aircraft. Direct flights from New Delhi and Bengaluru are available frequently.

By Train: Europe is best seen through traveling by train. Milan houses one of the most beautiful train stations in Italy called Milan Centrale. This station located in the busy business district of Piazza Duca d’Aosta and has trains to and from major countries of Europe. One can either opt for the Eurail Pass or book tickets way in advance to manage a low-cost budget.

These are the few places where you can meet Santa Claus in Milan during winter while enjoying the Christmas markets and the holiday season with friends and family. Plan your Christmas vacation to Italy this year with Travel Triangle and let the kids get a chance to meet Santa Claus from the North Pole.

Skydiving In Italy: Take That One Jump To Make A Thousand Memories!

A Handy Holiday Guide To Venice Tourism-Queen Of Adriatic Sea