Puebla Travel: Explore The City’s Architecture, Food, And More In 2022 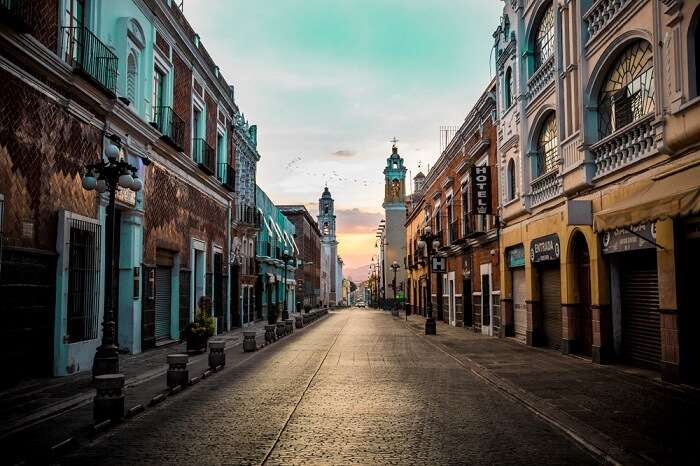 Puebla, dwelling in the Central Highlands and sitting between the Sierra Nevada & Madre Oriental of Mexico, is a land brimming with innumerable attractions and various natural scenic views. Puebla travel is one of the most fascinating travels in Mexico. Owing to the colonial architecture that adorns the land, the city of Puebla is as historically significant as it is wondrously beautiful. The aptly named Historic Centre of Puebla is named as one of the World Heritage Sites by UNESCO; the given title represents the significance and beauty of the city as a whole.

The city of Puebla is a renowned destination that offers something for everyone, regardless of if the visitor finds peace within natural sights or prefers to indulge themselves in the rich history of the destination. A lot of tours to Puebla are often organized from the neighboring cities. Considering the fact that the city is situated on the base of the Popocatepetl Volcano, Puebla is ideal for anyone who wishes to explore unknown territory in the quest of seeking breathtaking natural views. So follow this article if you are looking to plan a holiday to the ‘Land of Enchantment’, Puebla anytime soon.

Puebla is blessed with astounding desert landscapes, stunning snow-laden mountains, bubbling hot springs and breathtaking national monuments with landscapes, and fusions of European & American styles with Mexican and Native American heritage. The state boasts of vibrant and colorful sights to witness. Considering all of that, it is of little wonder that the State of Puebla is known as the ideal tourist spot for anyone who wishes to experience the best of Mexico. Puebla has since long enchanted travelers from around the globe, building quite a reputation for its scenic diversity. The Great Pyramid of Cholula – a massive pyramid known for its well-conserved historical sights and for being the largest pyramid in the world today – is one of the most splendid sights in the state. Elevated at the height of 55 meters, the ‘Tlachihualtepetl’ offers a wondrous sight to behold for anyone who visits the place.

Puebla encompasses a community that is rich in culture and believes in bringing together the masses through some of the festivals that the state of Puebla is known for. The State hosts the China Poblano, the Mole Poblano, Ritual of Quetzalcoatl, Cinco De Mayo, Day of the Dead Celebrations and various other carnivals. There are also several archeological sites to visit in the State namely the Amparo Museum which houses over 3,500 pieces of historical art and artifacts dating back to the pre-Columbian period.

All set for your vacation in Mexico? Puebla is an impeccable city that should be on your itinerary. Before heading to Puebla you should be aware of the best time to visit this Mexican city. The best months to visit Puebla are from January to April and from October to December. Do plan your vacation in these months to make the most out of it.

If you are looking for what to do in one day in Puebla, then here are a few places that you can visit. Take a look.

Constructed in 1575, this is a Roman Catholic Church in Puebla and also one of the best structures built in the city. Influenced by St. Peter’s Basilica, the cathedral has a tiled dome roof. It is undoubtedly one of the most emblematic buildings of the city and is considered to be an architectural marvel. The interior is full of gems and artistic artifacts. Its main altar designed by Manuel Tolsa is considered a masterpiece.

Must Read: 10 Hand Picked Affordable Homestays In Mexico You Should Stay At

With around 2619 monuments and 391 blocks, the Historic Downtown of Puebla is a place that one should definitely explore. The place was declared as World Heritage site in 1987 and has the most stunning buildings dating back to the 16th century. Walk through the narrow cobbled streets looking at the facades of bricks and tiles, and you will begin to comprehend the historical significance of the city. You will be stunned to find an architectural jewel with every step you take in the city.

With over 40 stores, this is that place in Puebla where you should head if you have a sweet tooth. The place is best to know more about Puebla’s gastronomy. Walking here is utter bliss for those who love desserts. The window displays are full of cookies and traditional candies. Street of Sweets is also locally known as the Street of Santa Clara among the locals because that was the convent of the Poor Clares. Taste the most amazing dishes and cookies here while you explore Puebla.

Sapos Square or Toad Square is another place in Puebla that one should explore. This square displays a plethora of balconies, gates and beautiful facades that were common during the Vice Royalty. It is important in Puebla travels to walk among the old houses and antique bazaars to fully understand the history of Puebla. The square has lively bars, that light up the ambiance of Saturday nights, and one can shop here at the Sunday flea market. Explore the place and find quirky items to take back home from Puebla.

It is the first public library, founded in 1646 in colonial Mexico. It is also considered sometimes as the first in the Americas. Palafoxiana Library is considered as a very important part of Puebla travels. To this day the collection in the library amounts to 45,059 manuscripts and books of the 15th, 16th,17th,18th,19th and 20th centuries also conserving the concept of a new Spain Library. The library also got listed in UNESCO’s Memory of the World Register in 2005. If books and history interests you, then you should definitely check out this place when in Puebla.

The State also boasts off a plethora of festivals and traditions, ranging from purely pre Hispanic background to modern fairs and carnivals.

Cinco de Mayo happens to be one of the most important festivals in the state of Puebla. The festival pays tribute to the Battle of Puebla in the French Intervention period of Puebla. The yearly celebration of Cinco de Mayo festival began in the state, representing the Mexican culture and happened to be the most significant political commemoration of the state. The observance takes place in the Guadalupe and Loreto forts of the city wherein the highlight of the festival is a reenactment of the historic battle at the state. The festival is celebrated lavishly in the state of Puebla as it symbolizes the people’s victory through uncountable struggles. The state happens to be the best place to experience the celebration of Cinco de Mayo.

The City of Puebla celebrates the Day of the Dead, like the rest of Mexico. The altars are decorated with large candles and turkey. Other items include candy skulls, black candelabras, incense burners and fruits of the season. Candles are arranged in a line and are believed to act as a guide for the wandering spirits and are often placed in front of altars. Food and beverages are also placed alongside religious objects and articles of the deceased. As the name implies, the festival is dedicated to being a tribute to the dead and for praying for a feeling of eternal peace for the departed souls.

Suggested Read: 10 Hostels In Mexico For A Cosy, Comfortable, And Economical Stay

Another primary attraction of Puebla travels is the carnival celebrations among a number of communities in the state. The most popular carnival took place in Huejotzingo and began as an amalgamation of a celebration dedicated to both Tlaloc and Catholic festivals. At present, the carnival not only includes music, masks and parades but also reenactments of the Battle of New Mexico, and pre-existing urban legends. The carnivals within the state representative and celebrates the varying beliefs of the people living in the area.

Translating to the Fair of Puebla, Feria de Puebla is a festival that aims to celebrate the rich culture that resides within the state of Puebla. The celebrations start from mid-April and go until mid-March. The fair is supposed to be a family event where people can bring along their loved ones to enjoy a few memorable moments. The fair comprises various rides and concerts. Bullfighting is an event is among the popular attraction in the fair of Puebla.

Dates: To Be Announced

Suggested Read: Mexico Travel Guide: Know Where To Go And What To Do On Your Next Visit To The Country!

As the name implies, the Ambulante Film Festival is set in place to celebrate and share the spotlight with people graced with respectable filmmaking talents. The celebration is dedicated to the local and international indie films, spanning over a wide range of genres. The celebration also pays tribute to other visual art forms like plays, musicals, and documentaries which aims to experiment within the filmmaking field.

Dates: To Be Announced

Check out the most important travel tips that you must follow!

Here is the map of the city of Puebla, Mexico to help one plan their trip. One can also take day trips from Puebla to the neighboring towns. And if you are wondering where to stay in Puebla, Mexico, then these are some hotels that one can consider: CasaReyna Hotel, La Purificadora Hotel, Presidente InterContinental Puebla, and more.

Puebla travel might not be too popular, but the town is a gem in Mexico. The buildings are sights to marvel at and there is something breathtaking at every corner of the city. Known for its colonial architecture, pottery, and cuisine, Puebla is a place totally worth visiting. Book a trip soon with TravelTriangle and explore this amazing city.

What does the flag of the State of Puebla look like?

The flag of The State of Puebla resembles the most current Mexican State flags. It has the Coat of Arms centered on a white field. The shield of Puebla has the motto, “United in Time, Effort, Justice and Hope” on its white outline

Puebla was discovered by Spanish explorers in the year of 1531. The city came to be known as Puebla de Los Angeles eight years later and rapidly developed into a very important Catholic center.