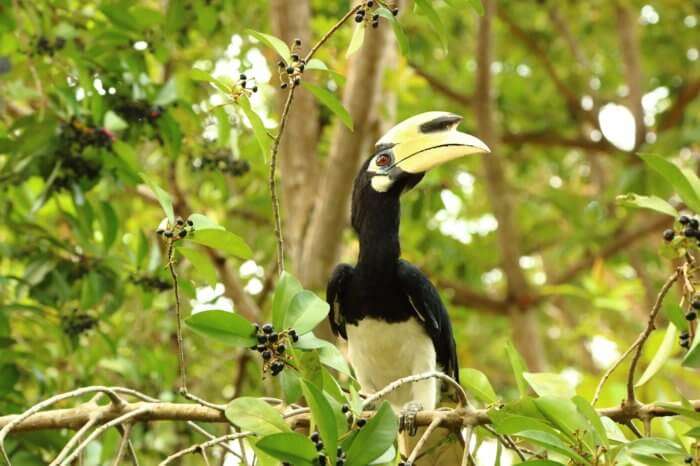 Though Sri Lanka is not predominantly famous for greenery and natural sceneries, there are some parts in the rural section of the country that is home to some natural lands. One such place is Pulau Ubin. Located in the northeastern part of Singapore, Pulau Ubin is a tropical island. It is famous for being the most biodiverse region in Singapore. Wildlife enthusiasts will find a lot to explore in this part of the country.
This place is considered as a treasure trove for native and exotic flora and fauna, which you will rarely see in the Singaporean mainland and thus Pulau Ubin wildlife is a highlight of the region. If you want to visit this lovely island and explore the wildlife, then you have come to the right place.

Image Source
Pulau Ubin is a biodiverse hotspot in Singapore and a place often frequented by nature lovers due to its extensive wildlife. It is estimated that this island is home to home to over 700 species of plants, 30 species of mammals, 40 species of reptiles, 175 species of butterflies, 50 species of dragonflies and over 200 species of birds, such as the biodiversity of the region. This island is home to the largest mangrove vegetation in Singapore and hosts rare species of animals and birds like the Ashy Roundleaf Bat, Greater Mouse Deer, Barred Eagle Owl, and Straw-headed Bulbul, Mangrove Pitta and brown wood Owl, etc.
A significant point of attraction in this region is the Chek Jawa Wetlands, which is a mixture of 6 different habitats and the richest ecosystems. The place is also rich in marine biodiversity with over 500 species of marine creatures. This wetland also comprises of two mangrove trees, which are listed in the Heritage Tree Register of Singapore.
The National Parks Board of Singapore frequently monitors this reserve and carry out field studies to maintain this bio diverse habitat.

Flora And Fauna Of Ubin Island

There are numerous plants and animals dwelling among the reserve of Pulau Ubin. Naming all the species will be a never exhausting list. Here is a list of some highlighted plants and animals in the Pulau Ubin region. While visiting Pulau Ubin, don’t forget to bring your binoculars to marvel at this wonderful sanctuary of nature from a closer range.

This is a very rare species of bat, which is critically endangered in other parts of the world. The abandoned buildings in Pulau Ubin is home to two colonies of this rare mammal species. These bats are also found in some parts of South and Southeast Asia, but never actually spotted in the mainland.

Suggested Read: 12 Things To Do In Kallang For A One Of A Kind Singapore Tour

This is another rare species of bat, found only in Pulau Ubin region and Singapore. The dilapidated structures of Pulau Ubin are home to several colonies of this bat species. The primary food of these bats are insects and unlike the name suggests, they don’t feed on blood!

Suggested Read: All You Need To Know About The Amazing Suntec City For Your Next Singaporean Vacay!

It is a butterfly species, which was believed to have gone extinct in Singapore, but they were later discovered in Pulau Ubin in 2002. This butterflies are mostly attracted to Indian Heliotrope plants.

Believed to be extinct in the Singapore mainland, there is a decent population of this mammal in Pulau Ubin. Like the small-clawed otter, it is another nocturnal species that come out in the night to forage for fruits and leaves and aquatic plant.

This plant species only thrives in Pulau Ubin, Singapore and Changi region of Singapore and a variety of the strangling fig tree. This is another rare species of tree, which is listed as a heritage tree in Singapore. The tree is over 160 years old and bears fruit in every six years interval.

Suggested Read: 3 Cafes In Nee Soon, Singapore To Put On Your List In 2022!

It is an endangered species of Orchid, found in the lowland forests of Pulau Ubin. They produce a large cluster of yellow flowers and once the plantlets have been transplanted to a different area, their population multiply.

Another endangered species of orchids, these were collected only once near the Singapore Botanic Gardens and later a single plant of this species was discovered in 2006 in Pulau Ubin.

Here is the list of places where you can spot the wildlife in Pulau Ubin. Keep Scrolling down and read along!

Image Source
Situated in one corner of the island of Pulau Ubin, Chek Jawa is a beautiful natural reserve in Singapore. This 100 hectare wetlands is teeming with wildlife and mangrove vegetation. To reach to Pulau Ubin, you will need to catch a ferry and then you can rent a bicycle or hire a van to go the place. You can go to the Chek Jawa Visitor Center to learn more about this wetland habitat. There are also many guided tours available that will take on exploration of the region.

Suggested Read: Know What Makes Bugis Street In Singapore Every Shopaholic’s Delight In 2022

Pasir Ris is a beach park in the central province of Singapore. There is a large marine pond in the park, where you can go fishing, the park is full of native trees and shrubs and flowering plants making it a perfect spot in Pulau Ubin for camping and picnics.

Further Read: Sugi Island: These Exhilarating Experiences On Will Make You Take A Detour From Singapore

To sum it up, Pulau Ubin is a filled with treasures of nature, when you visit Pulau Ubin make sure you take a closer look to appreciate the diverse wildlife of this place. So, get packed and book your trip to Singapore right away!

Which are the best months to see Pulau-Ubin Wildlife in Singapore?

February to September is the dry or non-rainy season. It is the right month to visit and see Pulau-Ubin Wildlife in Singapore.

Is Pulau-Ubin a safe place to take a wild tour by a solo woman tourist?

Yes, they must come under any of the all-inclusive Pulau-Ubin wildlife tour packages. This will include their local transit, hotel stay, food, sightseeing with a local guide.

Is there camping facilities in Pulau-Ubin Island to see its wildlife attractions?

Yes, day and night camping is allowed for the photographers and wildlife enthusiasts once in Pulau-Ubin Island. Night camping is the best to take photos and videos of nocturnal animals.

Are there any threats from Ubin villagers while in Pulau-Ubin Wildlife tour?

No, Ubin villagers are tourist-friendly. They do come as a guide and sell food and beverages for the wildlife tourists in Pulau-Ubin Island. Moreover, there are very few villagers only and they are native to this island.

What are the ways the wildlife enthusiast can explore Pulau-Ubin Island?

If you stay here for more than one day, hiking is the best way to explore wildlife places. If you come here for a day tour, cycling is the only option to explore the wildlife attractions.

Is it possible to see the wildlife through the water once in Pulau-Ubin Island?

Yes, kayaking and boating is the only way to explore this island from the seawater, mangroves, and lakes. You can hire them from the villagers present near the wildlife attractions.

Are there any man-eaters in Pulau-Ubin Island?