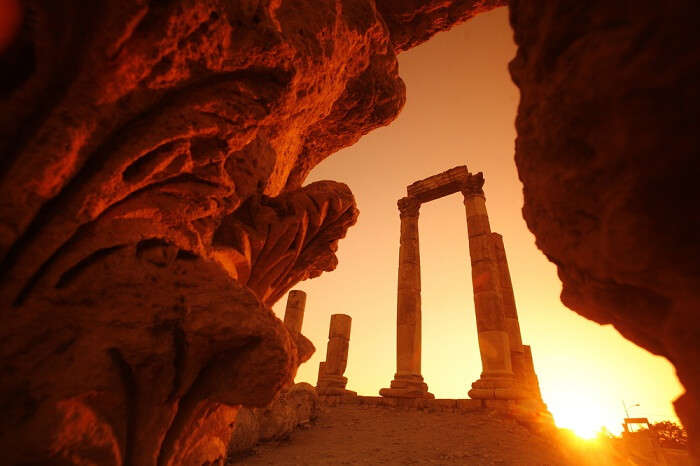 The greatly misunderstood destination of Jordan is one of the popular Arab countries for the tourists. The land of lost cities deserves to be more popular as a travel destination but it suffers ‘guilt-by-association’ due to its location in the Middle East. But travelers, who dared to visit the land of epic adventurers, cannot keep themselves from listing down numerous reasons to visit Jordan.

Natural wonders, holy places, ancient ruins, & modern cities; the country has it all. But to keep things simple, we have compiled a small list of the reasons to visit Jordan.

1. The destination is totally safe!

Most people associate the Middle-East with wars; often believing the countries here to be a permanent warzone. However, it is only wrong to entertain such thoughts for the truth is totally different. Jordan is, in fact, a peaceful country blooming in some bad neighborhood. It is totally safe, even for women and children.

If the safety concerns have been your preventing you to from taking the Jordan tours, it is high time to put them aside. Or else, you’ll miss some truly amazing tourist attractions in Jordan.

2. The places to visit in Jordan offer a grab bag of experiences.

There’s too much to see for history buffs and followers of different religions.

i. Petra: Discover Petra the way Indiana Jones did it

Though the Jordanian city of Petra is an ancient one, it remained unknown to the rest of the world for centuries. It was a flourishing business center between 400 BC & 106 AD and got listed as a UNESCO World Heritage Site in 1985. Of all the structures carved out of sandstones, the 30 m wide & 43 m high Al-Khazneh temple (The Treasury) is the most popular one.

Must Read: 10 Vibrant And Lively Hostels In Jordan For An Amazing Vacation

ii. Amman: Step back in time to the era of the Romans & the Greeks

Amman – the capital city of Jordan – is large, exciting, and deeply rooted in history. The region has a long history, dating back to at least the 13th Century BC. Impressive Greek & Roman ruins, old souks & markets, and museums & galleries take you through a walk through the history of the city and that of Jordan itself.

In addition to the historical significance, the capital city boasts of many modern attractions, markets, and even nightlife.

Also visit: Jerash, located north of the capital Amman, has been inhabited since the Bronze Age. A part of the Jordanian tourism, it is known for the ruins of the walled Greco-Roman city of Gerasa.

Mount Nebo is one of the most sacred sites for the Christians and the Jordanians. It is believed that it was here that the Biblical prophet Moses saw the Promised Land. It is also believed that he died & was buried here, though the whereabouts of his grave are unknown.

A stone memorial and a church sits atop the hill, dedicated to the prophet Moses. Christians have, for ages, made a pilgrimage to this hill. From the top of the hill, dazzling views of the supposed Promised Land can be seen.

iv. Madaba: Marvel at or get your own Mosaic masterpiece

Madaba lies very close to Mount Nebo. But had it not been for the detailed stone mosaics available here, Madaba might not have ever made it to the map of Jordan.

The list is no less for casual tourists and nature lovers.

v. Dead Sea: Float in a giant salt lake at the lowest point on Earth

The world-famous Dead Sea – shared by Jordan, Israel, and the Palestinian territories – is a lake with over 34% salinity. This high level of salinity allows the swimmers to float on the bright blue waters without any effort.

And the Dead Sea is famous not only for its ‘float-enabling’ salt waters, not also for its mud that is known to have restorative properties. Several resorts in this area of the lowest natural spa on Earth offer massages and special mud treatments. One can also purchase scrubs, salts, or other products for souvenirs from this area.

vi. Wadi Rum: Camp under the stars in the desert with Bedouins

The UNESCO-listed World Heritage Site of Wadi Rum is a protected desert, unusual in its terrain & color. In fact, thanks to its unusual look, it has often been used as the shooting location for movie scenes depicting other planets.

vii. Aqaba: Snorkel through the vibrant reefs of the Red Sea

Perhaps the most picturesque location in Jordan, Aqaba boasts of photogenic mountain backdrops and deep blue waters. These waters of the Red Sea are perfect for deep sea diving, swimming, and snorkeling past the corals. The tank lying at the bottom of the waters of the Red Sea is an iconic attraction that divers like to explore, in addition to the beautiful corals of the sea.

Suggested Read: 15 Best Places To Visit In Jordan: A Blend Of Old And New

3. The adventurous things to do in Jordan offer adrenaline-pumping experiences.

i. Skydiving: Near the Dead Sea

ii. Snorkeling and scuba-diving: At Red Sea near Aqaba

4. And the nightlife in Jordan is not too dull either.

While Beirut in Lebanon continues to be the so-called sin-city of the Middle East, Jordan totally lives up to its reputation of a modern nation. And contributing majorly in the cause is the buzzing capital city, Amman. Now, Amman is not the only city with a decent nightlife, it certainly is the best in the country.

Here’s the best of the nightlife in Jordan that you can experience while in the country:

5. The Jordanian cuisine is delicious.

With traditional Mediterranean & Middle Eastern influences richly imbued in the food, the delicious Jordanian cuisine dishes never cease to amaze those who taste them. Starters include a variety of mezze or small plates with traditional hummus, baba ghanoush (dish of cooked eggplant mixed with olive oil and various seasonings), and meat.

Main course meals offer a lot to choose from. Of these, roasted meat and mansaf (the national dish of Jordan made from lamb, fermented yogurt, spices, and rice) are the most delicious options.

6. There are many hotels in Jordan where you can rest & relax and enjoy the luxury

If you’re looking for rest & relaxation, Jordan can oblige you with the same as well. Amman, Petra, and Aqaba offer an array of choices; covering all price brackets. The hotels and resorts near Dead Sea that are among the best spa resorts in the world.

Camping in Jordan: The Royal Society for the Conservation of Nation (RSCN) offers Bring Your Own Tent camping options at several campsites including Dana and Ajloun. However, the desert camping in Wadi Rum is the best option with traditional bedouin black goat-hair tents with a decent toilet block, kitchen, and even makeshift showers.

7. The people are kind, warm, and hospitable.

And to add to all the enriching experiences, there is warmth and hospitality that one receives from the kind people of Jordan. The Jordanians will try & help you in every possible way they can and with utmost politeness. Don’t be surprised if they even invite you to their abodes for a hearty meal!

Hope we have given you enough reasons to visit Jordan. All you need to do now is plan a holiday in Jordan and unwrap the treasures of the country.