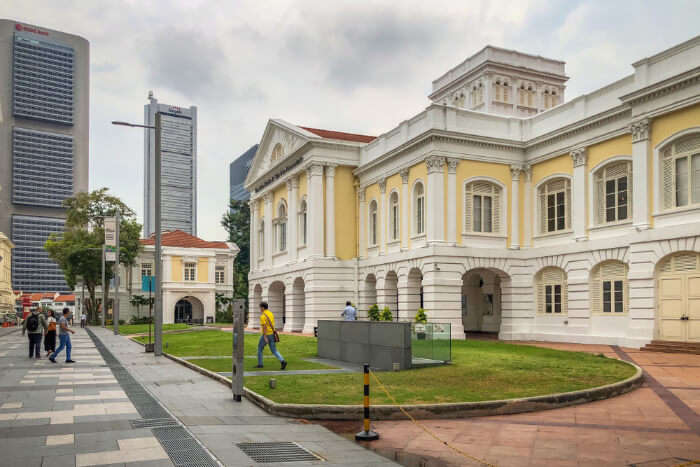 Constructed in 1827, the Old Parliament House used to be a government building in Singapore. The building has now being used as a multi-disciplinary arts venue, named The Arts House. The venue is responsible for hosting a variety of concerts and art exhibitions. There are many good restaurants near Old Parliament House that your visit and try.

For Singaporeans, food is a significant factor to national identity and a cultural thread that unites. Singapore has been a port city in the past and there people from far off and different ethnic groups have set their foot on this land. Their coming has influenced the country’s food culture too. The highest ratio of ethnic population is of Chinese and India is the third highest followed by Indonesian, Peranakan and Western traditions, especially Kristang who are English and Portuguese-influenced Eurasians. You would also find influences from other regions like Sri Lanka, Thailand, and the Middle East are also present. Singapore was a part of Malaysia, due to which Malay cuisine flavors also dominate the food found here. Singaporean food can be mainly grouped into 5 types – meat, seafood, rice, noodles, and dessert or snacks.

Singaporean literature gives eating the reputation of the national pastime and calls food ‘a national obsession’. This is one of those places in the world where religion also provides certain rules for eating. For instance – Muslims do not eat pork and Hindus do not eat beef. Apart from these, there are groups vegetarians and vegans.


A perfect destination for casual dining, Tomodachi is a popular name in Pasir Ris, Singapore where the foodies arrive to enjoy great food. Being an exclusive Japanese themed eatery, this restaurant is always thronged by those who love to taste the best of Japanese cuisines. The people always rush here to taste famous sushi recipes besides many other Japanese food varieties.


With its Takeaway Only option, PrimaDeli is a famous bakery in the Pasir Ris area of Singapore. It doesn’t have seating area still remains rushed for desserts and bakes sold to the foodies. It is popular for preparing highly delicious fresh-baked light food items. Its finest quality pastries, buns, bread, and cakes are a popular name in Singapore today. Ever since it was launched in 1992, it has emerged as the country’s longest-running food franchise.


Founded by an Indonesian national Tjendri Anastasia in 1979, Bengawan Solo has become a popular name in Singapore over the decades. She opened this eatery alongside her husband Johnson Liew whom she met in Singapore. Both entered into the restaurant business after practicing home baking. Today, this restaurant serves variety of Indonesian recipes. The takeaway restaurant has no seating arrangement.

As Porta Porta Italian Restaurant has become a landmark in Pasir Ris area of Singapore today, it is recommended to book a table well in advance to taste the great dishes from Italian cuisine. This restaurant serves authentic Italian recipes besides serving variety of wines in its Full Bar.mThis restaurant is indeed considered one of the best options for a fine-dining experience.

You cannot visit Singapore and stay away from Singaporean cuisine. Good food is a way of life here. So plan a trip to Singapore and explore all the above-given options of restaurants near Old Parliament House, one of the most iconic buildings in the country.

16 Best Restaurants In Thane Where One Can Treat Their Taste Buds In 2022!