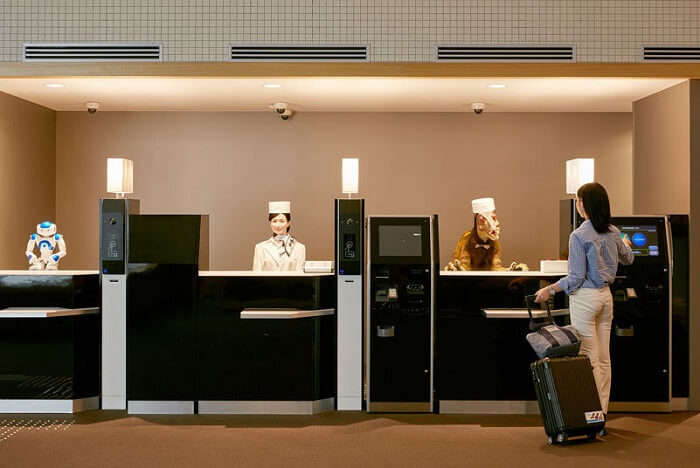 Tired of dealing with those slow, dumb, and unfriendly hotel staff? How about a hotel that provides scope for minimal interaction with the ‘people’ running the hotel? Because in the Henn Na Hotel in Japan, there aren’t any!

Being called ‘Weird Hotel’ by locals, the Henn Na Hotel opened in 2016 in the town of Sasebo is staffed almost exclusively by robots of various shapes and sizes and serving myriad different purposes in the enormous property.

From an English speaking dinosaur greeting you at the reception to Wall-E assisting you in the room as your personal concierge, everything in the hotel is manned by machines. Even the check-in procedure, bellhop service, waiters, and the cloakroom is automated and managed by machines.

But how do things like check-in and room access work? Well, ‘smartly’, we’d say! The screen at the reception captures and registers a digital image of the guest’s face during check-in, which is then used to grant access to rooms instead of traditional keys. However, the reception shall also provide you card keys on request in case you wish to keep it subtle!

Some of the most intriguing things for kids here will the drones carrying mini jars of welcome snacks, and the ‘Tuly’, a small robot in each room that will act as your personal concierge and tell you about things like the next day’s weather on questioning. It will even turn off the lights when you command it to. Cool, isn’t it?

If you’re wondering what happens in the case of an emergency, you need not worry. Humans do step in when it’s of utmost importance. According to the hotel’s website, there are a few human staff members who are available on-call 24X7 and who will help guests in case of an emergency.

The prices for a Double Room start from around INR 4,750/-. Fancy a stay in this robot run hotel in Japan? Let us know in the comments below.