Royal Palace In Phnom Penh Guide: The Palace Of The Pearl Of Asia! 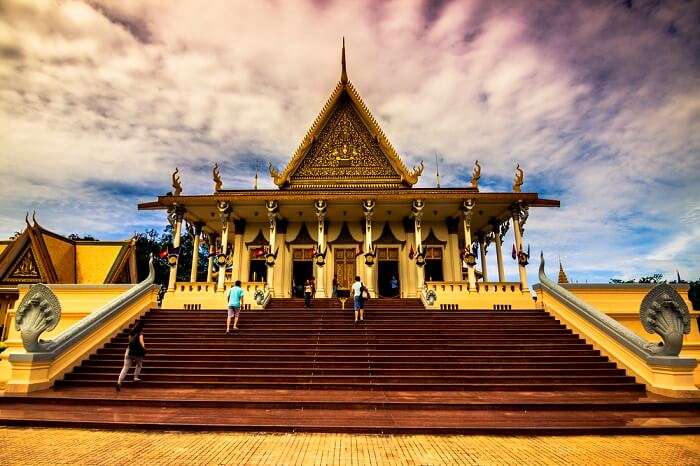 Phnom Penh is an astounding city located at the heart of the remarkable kingdom of Cambodia. The impressive capital of Cambodia is a paragon of architectural excellence. Officially named as Krong Chaktomok, Phnom Penh is famous as the City of Four Faces among the locals. The City of Four Faces is worldwide known for its coruscating Royal Palace with the silver Pagoda. A paradise for the history and architectural perfection admirers, this Royal palace in Phnom Penh is a breathtaking experience to have once in your life. Another thing which you must have is our little guide of Royal palace which will help you to uncover the hidden stories of the stunning palace which once was ruled by the Khmer kings.

Built in 1866 by King Norodom I in place of the old town as the astrologers and royal ministers believed that the site was an auspicious one, this picturesque palace is an amalgamation of Khmer architecture and European designs.

Must Read: 10 Most Romantic Places In Cambodia That Will Spoil You Both For Life!

Throne Hall: Famed as the Preah Tineang Tevea Vinnichay Mohai Moha Prasat, Throne hall means the Sacred Seat Of Judgement. Used today as the centre where royal ceremonies and rituals take place, the Throne hall in the past was used as the place where king’s confidants, generals, royal officials used to carry out their duties. The traditional throne or The Preah Tineang Bossabok is placed in this hall and the hall is well known for this stunning throne.

Moonlight Pavilion: An open-air pavilion where the Khmer classical dance was organised in the past and even today the dance is held in the Moonlight Pavilion. Recently this marvellous pavilion was used for tribune for the new king in 2004.

Silver Pagoda: Located at the South entrance of the Royal Palace Phnom Penh, the beautiful compound is a place where the popular Wat Preah Keo is situated. The main building consists of Buddha statues and precious ornaments.

The Khemarin Palace: The royal residence of the King, the Khemarin palace has an amazingly designed single spired prang which adds to the beauty of the palace.

Why Visit The Royal Palace?

The Royal Palace in Phnom Penh has striking architecture and is situated at the riverfront. Sunshine falls on the artistically designed golden structures and the site looks captivating. Get a glimpse of the glorious history and past of Cambodia by visiting the Royal Palace in Phnom Penh. One should definitely visit the palace to explore the imperial life of the Khmer King and Queen. The Throne hall and the Gardens are designed gorgeously, and the palace is believed to be a paradise for the history fanatics.

Suggested Read: 10 Best Waterfalls In Cambodia That Ought To Be A Part Of Your Next Trip!

You can visit the Royal Palace at any time throughout the year. Most of the travelers visit the palace in the months of December and January as in these months the weather is pleasant as Phnom Penh experiences less rainfall in these months.

Suggested Read: 18 Essential Things To Do In Phnom Penh On Your Cambodian Trip

How To Reach The Royal Palace In Phnom Penh

One can easily reach the palace by hiring a tuk-tuk or a remork-moto. You can even hire a taxi or rent a bicycle to explore the palace as well as the beautiful city of Phnom Penh. Remember to plan your trip according to the timings which are 8 AM to 5 Pm and reach the spot on time as the locals are punctual about the timings.

Suggested Read: 8 Idyllic Places To Visit In Kampot, The Land Of Salt And Pepper!

Are you ready to be allured by the enticing Royal Palace? Plan your trip to Phnom Penh with TravelTriangle and get ready to explore the dazzling Royal Palace of Cambodia.