Scuba Diving In Queensland: Top 12 Locations To Experience This Sea Adventure In 2021! 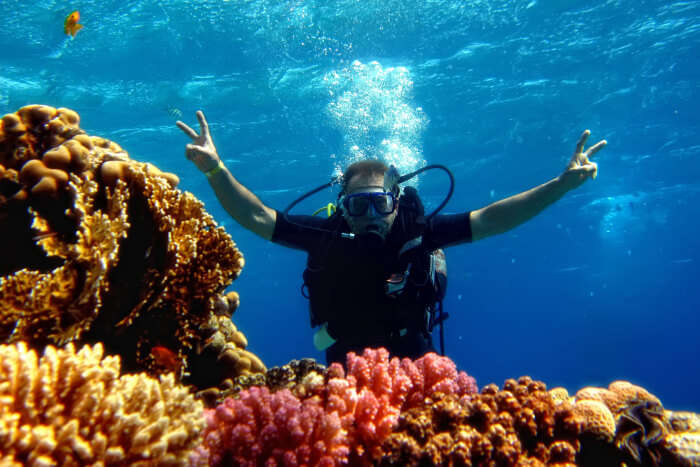 Queensland is a fascinating coastal state of Australia. With beautiful cities like Brisbane, Gold Coast and Cairns; Queensland is also globally famous for Great Barrier Reef-the largest coral reef of the world. Adorned with sun-kissed beaches, reefs and abundance of marine species; Queensland is one of the best places to try water sports. Scuba diving in Queensland is highly in demand among both beginners and learned divers. Let’s explore all the famous spots for the same, through this mini guide to diving in Queensland and enjoy the ultimate ecstasy and excitement of this adventure.

About The Great Barrier Reef

Located off the east coast of the Queensland mainland, Australia; Great Barrier Reef is the largest coral reef in the world, comprising of galore of marine organisms. Stretching for 2300 km, this is the largest living organism on Earth, visible from outer space and listed as one of the World Heritage Sites by UNESCO. Along the entire Great Barrier Reef, there are numerous small reefs, wrecks and small islands which not only make up for best diving spots in Queensland but in entire Australia. Great Barrier Reef is the home to aplenty marine organisms like corals, fishes, turtles, dolphins, sharks and mollusks.

Great Barrier Reef- world’s largest coral reef is located along the Queensland coast. All along the reef; there are plenty of popular diving spots. Experience scuba diving and relish the mesmeric beauty of the underwater marine world.

To enjoy super enthralling and best scuba diving in Queensland; explore Wolf Rock Diving Centre, located by the scenic Rainbow beach. Perfectly set at the top end of Sunshine Coast, this is considered to be one of the best spots to experience most adventurous and daring dives. You will get to see grey nurse sharks in abundance, eagle rays, blue rays, wobbegong sharks, leopard sharks and giant Queensland groper. This place is not suitable to novices as the continental shelf is deeper than 18 m and Wolf Rock Diving Centre offers PADI certified diving courses only for professionals.

Must Read: 10 Best Queensland Beaches Where You Can Soak In Ultimate Bliss & Soothing Sunshine

Last but certainly not the least is North Stradbroke Island. This is one of the few diving spots in Queensland which offers the opportunity for surfing as well as diving simultaneously. Popular diving spots like Flat Rock, Shag Rock and Manta Bommie are famous for the population of leopard shark, manta rays and grey nurse sharks.

Suggested Read: 10 Best Queensland Museums Every History Buff Must Visit To Witness The Art And Culture!

SS Yongala Wreck is an incredible place to try the best scuba diving in Queensland, Australia. In 1911, Yongala ship sank in this place and presently the shipwreck is one of the most sought-after diving spots in the country. Home to varied marine organisms like turtles, eagle rays, large pelagics, octopuses, blue rays and hordes of fishes; SS Yongala Wreck makes your diving experience worth in every aspect.

Suggested Read: Shopping In Queensland: 10 Best Places To Splurge & Treat The Shopaholic Within

At the north-eastern tip of the Great Barrier lies Osprey Reef. This is an underwater atoll in the Coral Sea famous for enormous shark population. Oval in shape; Osprey Reef has a lagoon and a steep continental shelf to make diving really daring. There is a very high chance that you get to see hammerhead sharks, white tip reef sharks and stings rays swimming by.

With clear blue and calm water; Cod Hole is another one among best diving sites in Queensland. This place was discovered merely 20 years ago by the famous underwater photographer; Valerie and Ron Taylor and now considered as one of the must-do dive-sites in Australia. Located in the northern part of Great Barrier Reef, on the Ribbon Reef, this place is the home to diver size potato cod.

This is a scenic place in Gladstone area of Queensland. Heron Island comprises of 20 astounding diving sites and some of them are located just near the beach. Hence this is a perfect place for novices who wish to try scuba diving for the first time. Enjoy thrilling diving and swim with blacktip reef sharks, manta rays and pelagic species.

Next in the list is Steve Bommie’s Ribbon Reef. Another spot in the northern part of Great Barrier Reef, it starts at 33 meters the and rises up to 3 meters near the surface. The calm water with less current has made this place perfect for underwater photography. Keep your cameras ready to capture hordes of pipefish, flatworms, anemone fish, reef sharks and bigeye trevally.

Suggested Read: Summer In Queensland: See What Makes It The Best Season To Visit

To the south of the Great Barrier Reef lies Lady Elliot Island. With quite a few diving spots, this island is special and popular for two main reasons. Firstly, it has clear visibility all year round, so diving takes place throughout the year. Secondly, the large colonies of Manta Rays in the Lady Elliot Island increases your probability of spotting some of them.

Another name in the league of best scuba diving sites in Queensland is Bait Reef, situated near Hamilton Island of Sunshine Coast. With depth between 4-18 meters and visibility ranging between 10-20 meters; Bait Reef is the most appropriate choice for novice divers. One can spot reef fish, turtles, large and soft corals during the dive and may be lucky enough to see manta rays even.

Suggested Read: 10 Best Queensland Theme Parks For A Funtastic Day Out With Your Loved Ones!

Clear and high visibility, vibrant looking corals and hordes of fishes will welcome you at Agincourt Reef. Situated near Port Douglas, this place features 16 diving spots with swimming channels, caves and marine gardens. Some of the famous and spectacular diving places of Agincourt Reef are Nursery Bommie where pelagic fishes gather for food and Blue Wonder- a 40 meters high diving wall.

HMAS is a decommissioned missile which sunk near Mooloolaba in 2005. Since then, it has become one of the best artificial diving spots in Queensland. With colonies of yellow-tailed kingfish, octopus, turtles and eagle rays; this is not only one of the most spectacular and accessible wreck dives in Queensland, Australia but in the World.

Suggested Read: 10 Best Queensland Villas That Are Perfect For Your Next Holiday

Flinders Reef is an isolated reef located at a distance of 5 kms from Moreton Island. Often called the hidden gem in the list of best scuba diving spots in Queensland. This place is the home to leopard sharks, tropical fish and mantas and frequented by professional divers mostly. Flinders Reef can be reached by ferries or boats from Brisbane.

Further Read: 10 Romantic Places In Queensland One Must Visit To Rekindle The Love In Australia!

Here is the list of top spots for experiencing best scuba diving in Queensland. If you are an adventure freak and are willing to visit this ‘country of Kangaroos’, do experience this fun and thrill at some of these diving places. Plan a trip to Australia and delve into the sea-exploration spree in Queensland.

Q. Where is the best place to dive the Great Barrier Reef?

A. Osprey Reef, Heron Island, Ribbon Reef are some of the best places to dive at the Great Barrier Reef.

Q. When can you dive the Great Barrier Reef?

A. The best time to go for scuba diving in Great Barrier Reef is between June to October because the temperature remains warm and there are less chances of rain during this time.

Q. Where is the best diving in Australia?

A. Great Barrier Reef and Ningaloo Reef in Western Australia are some of the best diving spots in Australia.

Q. Can you die from scuba diving?

A. Yes, there are around 100 people who die every year in North America due to decompression sickness (DCS), arterial air embolism and of course drowning.

Q. Can you scuba dive without being certified?

A. No, as scuba diving involves the risk of drowning and arterial compression. Thus it is important to take training from a professional diver and then take the leap.

Scuba Diving In Goa 2021: An Experience That Goes Beyond An Adventurer’s Imagination

Scuba Diving In Krabi: 5 Ultimate Diving Spots That Will Leave You Thrilled In 2021

10 Vivacious Clubs In Sydney To Bop The Night Away