Overnight Snowfall In Saudi Arabia Turned The Desert White And We’re Loving It! 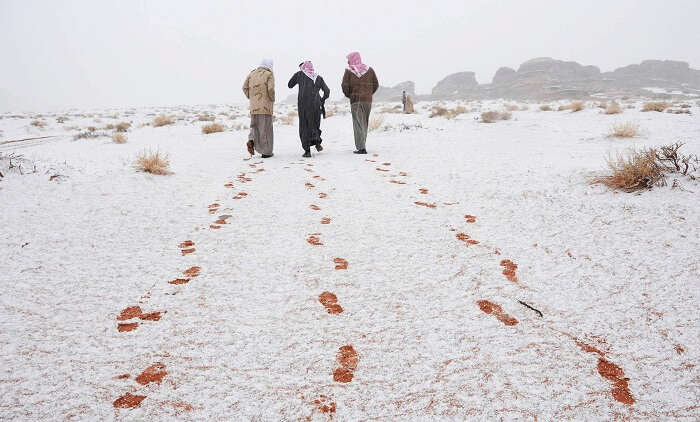 Over the last decade or so, the world is experiencing unusual climate patterns. Much to our surprise, recently it snowed in the Arabian Desert. Although it’s not entirely unexpected since last month it was the Sahara – the hottest desert in the world – which turned overnight into a winter wonderland.

A rare phenomenon occurred in the Middle Eastern country which is characteristically known for its desert landscape and blazing temperatures. A short bout of snowstorm turned the crimson desert into a white fairyland. The Tabuk region, along the coast of Red Sea, in the northwest part of Saudi Arabia was swathed in snow as the mercury level suddenly dipped to a freezing minus 2 degree Celsius. The frosty weather is not entirely unusual, however, snowfall in Saudi Arabia is an uncommon occurrence. The accumulation of snow was heavier and thicker in the higher elevations. Traditionally, during the winter season in Saudi Arabia, the average temperature hovers around 20 degrees. While the jury’s still out on what caused this event, the locals can be seen, in the pictures below, making the most of this random cold snap, by either sledding down hills or taking their vehicles for a spin before the freshly fallen snow melted.

While many people seized this unique opportunity to click selfies and share their excitement on social media platforms, the Bactrian camels looked handsome and somewhat surprised with a layer of snow. Here are some more visuals of snowfall in Saudi Arabia:

An adorable image of families playing in a smattering of snow in northern Saudi Arabia, from the official Saudi Press Agency. pic.twitter.com/kJ06beHd6q

Comment your opinion on what could have caused this beautiful yet alarming incident in the desert country of Saudi Arabia.

15 Resorts In Chandigarh For An Epic Staycation At The Gateway To The Hills!