Stari Most Bridge: An Ultimate Guide To Walk Around & Explore This World Heritage Site In 2022 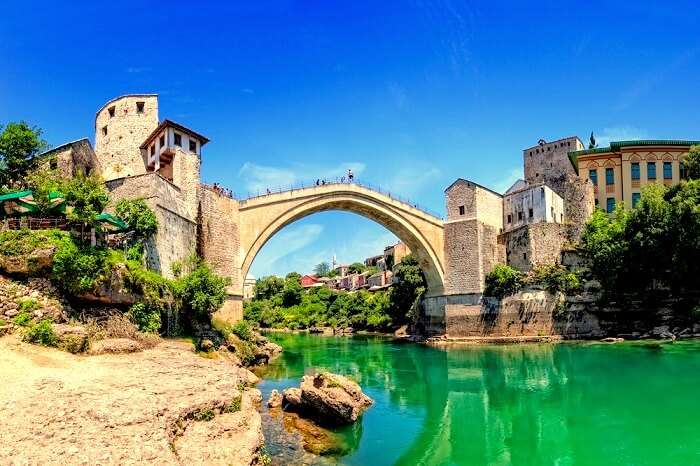 Mostar is often referred to as the “land holding a slice of past”. The largest city in the country of Bosnia and Herzegovina, this place is known for its beautiful amalgamation of past and modernity. Apart from the twinkling millhouse restaurants settled along the gushing streams, there is another world heritage architecture which adds a historic charm to the streets of Mostar.

For the travelers who have Europe in their travel bucket list, make sure to mark the Stari Most Bridge in that. Also called the “Old Bridge”, this place will take you on a tour to the bygone era. But before visiting this heritage site make sure to know everything about Stari Most Bridge with this handy guide.

About Stari Most Bridge

Formerly built in the 16th century, Stari Most Bridge or commonly known as the Ottoman Bridge in the city of Mostar, Bosnia and Herzegovina is a UNESCO world heritage site. Connecting two parts of the city, this heritage bridge is built over the Neretva river. Standing over the past 427 years, this bridge was destroyed in the year 1993 on 9 November by the Croat Military Forces during the Croat-Bosniak war. After the massacre, a project was started to rebuild the Stari bridge and the reconstructed bridge was opened in 23 July, 2004. This heritage bridge was designed and built by Mimar Hayruddin and it beautifully reflects the Balkan Islamic architecture. The bridge is seen as a symbol of reconciliation, international cooperation and the diverse culture, ethnic and religious communities.

Facts About Stari Most Bridge

Suggested Read: Latvia In Summer: The Ultimate Guide For Your European Vacay In Summer 2022!

Cliff Diving At Stari Most Bridge

Going beyond the magnificent architecture of the Stari Most Bridge, this historical landmark is also famous for being a host of the thrilling Cliff diving competition in Bosnia. This is possibly the world’s oldest diving competition which takes place every year at this UNESCO declared world heritage site. In this, the young men take a jump from the apex of the bridge direct to the Neretva river. This ritual signifies the transition to manhood and has been prevailing in the region for many decades. It is one of the most popular events during the summertime and requires rigorous training as diving into that chilling water can be very dangerous. This enthralling sport event has become a part of the Red Bull Cliff Diving World Series in 2015 and every year many enthusiastic divers take the leap from the cliff of this ancient bridge. Needless to say, it’s a great event to be a part of if you wish to go beyond the Stari Most Bridge’s height.

Excited to explore this heritage attractions while in the city of Mostar? If yes, then make sure to capture the beauty of this magnificent architecture which is the heart of this little city. And don’t miss the chance to also spend and explore the narrow lanes of the Bosnia while vacationing in Europe!

Where is the Stari Most Bridge located?

This 16th-century bridge is located in Bosnia and Herzegovina, in Europe.

What is the Stari Most Bridge made of?

The Stari Most Bridge was made of mortar, made up with egg whites and was 66 feet tall.

Bari In January 2022: All You Need To Know About The Little Italian Town