7 Temples In Vietnam That Are An Epitome Of Art & Architecture! 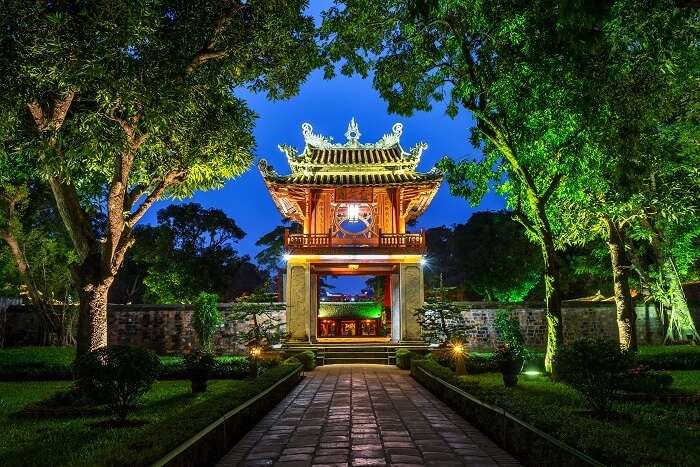 Home to countless pagodas, shrines, and religious sites, the enchanting temples in Vietnam are a must for every traveler to visit, explore, and relish. From Buddhist monasteries to Hindu shrines, these temples form one of the prime sources to learn more about the rich history and cultural heritage of Vietnam. While you plan your next trip to this famous tourist destination, we have exclusively selected some of the most ancient temples in Vietnam. Have a look!

And as you embark on your tour to explore some of the best temples in Vietnam across cities like Ho Chi Minh, Hanoi, and more, make sure you do not miss out on these seven best ones in the country.

Dating back to the 6th century, Tran Quoc Pagoda is one of the oldest temples in Hanoi, Vietnam. Throughout these years, it has undergone a number of changes and was renamed by Emperor Le Huy Tong in the 17th century from An Quoc to Tran Quoc – meaning “protecting the country.” The main pagoda stands at a height of 15 meters with 11 levels while its surrounding structures include a museum that houses historical relics, and an incense burning house. Also, the pagoda is where the devotees gather for annual festivals such as Buddha’s birthday and Tet Festival.

Location: Thanh Nien, Truc Bach, Ba Dinh, Hanoi
Timings: 07:30 AM to 06:00 PM
Tip: It is advised to reach here around early evening to avoid the crowd.

Suggested Read: 52 Stunning Places To Visit In Vietnam In 2022 For A Natural And Historic Retreat

A complex of several Buddhist temples, Ba Dinh Pagoda is home to 500 intricately carved statues of Buddha. It is set within the Gia Sinh Commune and locals frequently visit to pay their respects and know what fortune holds for them via monks. Ba Dinh Pagoda is undoubtedly one of the most famous Buddhist temples in Vietnam, a place that offers awe-inspiring views of the surrounding mountains, trails for hiking through the Ba Chua Thuong Ngan forest and exploring limestone grottoes.

Location: Gia Sinh Commune, Gia Vien District, Ninh Binh Province
Timings: 07:00 AM to 06:00 PM
Tip: If you happen to be here on the sixth day of the Lunar New Year, you can also experience blessing ceremonies, ritual processions, traditional music, and dance performances of a vibrant festival held between February to March.

Cao Dai Temple is one of 1,000 Cao Dai Temples, and one of the most well-known temples in Vietnam. Constructed in the 1930s and completed in 1955, Cao Dai temple is a technicolored religious site that attracts hundreds of travelers every day. Caodaists believe that all religions are the same and combine Buddhism, Christianity, Hinduism, Islam, Taoism, Judaism, Confucianism and Zoroastrianism into a monotheistic religion. Daily worshipping ceremonies are held every 6 hours when one can capture unforgettable images of devotees, priests, and bishops. Nonetheless, with an architectural combination of Oriental, Baroque and Neo-Gothic styles, Cao Dai Temple features ornate decorations including sky blue ceilings, seven-headed cobras, and pillars wrapped with dragons which makes it a must-visit for all.

Location: Long Hoa Village, which is 100 kms northwest of Ho Chi Minh City
Timings: NA
Tip: To witness their beautiful prayer ceremony, be sure to come around noon time here.

Suggested Read: Top 10 Vietnam Beach Resorts For A “Living In The Moment” Holiday

Also known as Tortoise Pagoda, Emperor Jade Pagoda is one of the most important temples in Vietnam and one of the most historically important shrines in the city. The temple was built by a Cantonese community that migrated from Southwest China’s Guangzhou province in the 20th century. The Emperor Jade Pagoda is an excellent representation of Buddhism’s Mahayanist branch, which is practiced widely in the country. Also, one can get a close look at the carvings of Kim Hua – the goddess of fertility surrounded by figures of women and small children, and the altar of Kuan Yin – the goddess of mercy. Although it can get crowded at times, this is one of the charming Vietnamese temples that you must visit during your holiday in Vietnam. If you’re looking for the temples in Ho Chi Minh city, Vietnam, then do consider this one!

Location: 73 mai Thi Luu, District 3, Ho Chi Minh City
Timings: 07:00 AM to 06:00 PM
Tip: To know the meaning behind some of the things and artwork you see in the temple, it is better to hire a guide along for a tour.

A Confucian temple founded in 1070, the Temple of Literature is home to the first university in Vietnam. Its architecture dates back to the Ly and Tran dynasties that ruled the country for over 700 years. It is one of the famous temples in Vietnam, and featured on the back of the 100,000 Vietnamese Dong banknote. The Temple of Literature has five courtyards – one containing the Well of Heavenly Clarity while some are resting areas for resident scholars and monks. The fourth courtyard houses altars of Confucius’ 72 most decorated students and the fifth is where the Quoc Tu Giam, or Imperial Academy, stands. One of the temples in Hanoi, Vietnam, you will not have any difficulty finding this temple and it is the perfect place for a zen-like experience during your stay in the city.

Location: 58 Quoc Tu Giam, Van Mieu, Dong Da, Hanoi
Timings: 08:00 AM to 06:00 PM
Tip: A tour guide is highly recommended to explain you the meaning and historical legends behind this place.

Suggested Read: 7 Most Romantic Hotels In Vietnam: The Best Of Beach Resorts And Hotels For Couples

Visit one of the most famous Hindu temples in Vietnam, the Mariamman Hindu Temple of Ho Chi Minh City. It is called Chua Ba Mariamman in Vietnamese and was built at the end of the 19th century as a dedication to the Hindu goddess Mariamman. Located at the heart of the city, the temple is very close to Ben Thanh market which makes it easy to locate. From beautifully crafted statues of Amman, Ganesha, Lakshmi, Muruga, and more, this temple is counted amongst the awe-striking Vietnamese temples owing to the breathtaking sculptures of Amman in her various avatars is one of the most attractive features of this temple and it definitely tops the list of temples in Vietnam. While it is just one of the many ancient Hindu temples in Vietnam, the Mariamman Hindu Temple is a must-visit for all travelers.

Location: 66 Ton That Thiep, Phuong Ben Nghe, Quan 1, Ho Chi Minh City
Timings: NA
Tip: Be sure to pay respect to the worshippers here as it is a working temple.

Suggested Read: Honeymoon In Vietnam 2022: Your Guide To This Underrated Romantic Destination

Image Source
Located in the village of Huong Long, this beautiful temple is at a distance of 5 km from the city of Hue. The temple is situated on the banks of the Perfume River and is a very well preserved tourist attraction. Built during the time of the ruler Thieu Tri, this is one of the most beautiful Vietnamese temples. The seven-story Pagoda of this temple is unofficially considered to be the city’s symbol. Moreover, this temple has always been a part of the Vietnamese folklore.

Further Read: 14 Festivals In Vietnam That Are All About Glitz, Glam, And Grandeur This 2022!

Exploring these temples is a great way to experience the country’s ancient heritage, rich culture, and intricate architecture. Hence, enjoy the craftsmanship of these temples on a personalized Vietnam holiday, only with TravelTriangle! Book your trip now.

Q. Are there any Indian temples in Vietnam?

A. Yes. Subramaniam Swamy Temple and Sri Thenday Yuttha Pani Temple are some of the Indian temples in Vietnam.

Q. Which is the oldest temple in Vietnam?

A. Tran Quoc Pagoda is the oldest temple in Vietnam.

3 Must Visit Places In Hanoi No One Should Miss On A Solo Trip!