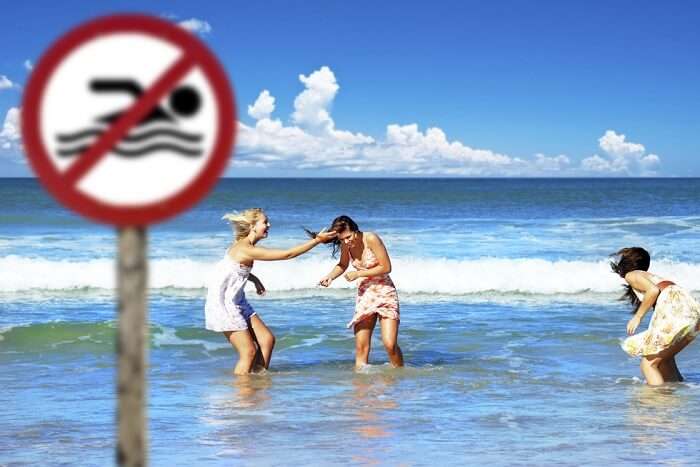 Australia has pretty much everything one could ask for: waves, landscapes, barbecue, you name it. But in a country like Australia, there are some things that don’t go down well with the locals. Here’s a list of things not to do in Australia ever that you can keep handy for your trip to the magnificent country.

10 Things Not To Do In Australia

Since we do not want trouble to find you on your vacation to Australia, we have compiled a list of 10 things not to do in Australia on your trip:

1. Do Not Forget To Put Sunscreen On

In Australia, the ground is subjected to more severe levels of ultraviolet radiations because of Australia’s proximity to Antarctica’s “ozone hole”. Hence, you do not want your skin directly in contact with the solar radiations. Moreover, Australians have the highest rate of skin cancer in the world which proves that the exposure to the sun there is something you want to monitor.

Go on a luxurious honeymoon trip to Australia and witness the best of marine life at the Great Barrier Reef. Indulge in Australia’s aquatic experiences, go for nature walks, and get the best of food & wine. Find best honeymoon deals offered only on TravelTriangle.

2. Do Not Swim Outside The Yellow And Red Flags

Whenever you are at a beach in Australia, make sure you look out for the yellow and red flags. You do not want to get caught in a riptide, especially if you are not a very good swimmer. Hence, the flags are implanted for your own safety. The lifeguards can also assist you. You can always find them in red and yellow clothing. The ocean can be quite unpredictable and you do not want to test it.

3. Do Not Expect The Food To Be Brought To Your Table Until You’ve Asked For It

All the casual settings in Australia are pretty much like McDonald’s or Domino’s in the way that they do not serve you but you help yourselves with the ordering and the food. Things like water, napkins, the ketchup, and spare utensils could be found at the self-serve station too. Although you will find servers and hostesses at high-end restaurants as a tourist, we are sure you are more interested in the cuisine rather than how it is served to you.

Yes, the world was supposed to have ended in the year 2012 but it did not. But not all warnings are empty, especially when you are in Australia. If you have heard of a storm warning, make sure to avoid camping near the big trees, driving through flooded roads or swimming in closed waters. Do not forget that you are on an island and the country is majorly sub-tropical. Steer clear of everything that might get risky during a storm because that’s just another front where Australia puts up great shows.

5. Swimming In The West Coast Beaches Is Prohibited

Swimming closer to the big cities like Sydney, Melbourne, Brisbane, and Perth is cool. And we can all agree that the beaches at Australia might be a little too tempting. But steer clear of the water while you are at the West Coast, which, for your information is also the Shark Central. Some of the most beautiful beaches might be covering some of the deadliest beings that you do not want to meet. Do your researches before you cross over a beach and make sure there is a lifeguard in the vicinity.

6. Do Not Climb Uluru

Climbing Uluru, also known as Ayers Rock, is something that many tourists want to strike off their bucket lists because of the picturesque views from its top. However many people seem to not know that it is of great spiritual significance to the local Anangu people and it is offensive and disrespectful to their beliefs. To them, the rock is a sacred monolith. Not just this, so far, there have been about 35 deaths on the rock, mostly due to heart attacks and other because of injuries. So for environmental, cultural and safety reasons, do not climb the rock.

7. Do Not Pet Dingos

In the picnic spots of Fraser Island or Northern Territory, you may encounter a dingo or two. Australian dingos are wild dogs. They may seem friendly because time and again they have been fed by humans but they might respond to your affection in any possible way and hence it is advised to maintain a respectful distance. Even though they are not much of a threat, they are canines and are not domesticated and you do not want to take this risk on a vacation. Not just dingos, koalas, goannas and cassowaries should be kept at bay too. You do not want to take anything back but good memories.

8. Do Not Buy/Rent An Old Car Without Mechanical Inspection

One of the most popular ways to traverse Australia is to buy an old car and sell it off before you leave, minus all the wear and tear owing to the great distances in Australia. Along with a deserted track in a new country, the last thing you want is a broken car and no one to get you help from home. The distances in Australia can always be longer than they seem and before you ignite the engine, you must make sure you would get to the destination and back without any inconvenience caused by your not so new vehicle.

Suggested Read: 10 Ways To Celebrate And Enjoy Christmas In Australia

9. Do Not Visit Gold Coast During Schoolies Week

During November’s last week, students from high school who are to be graduating soon, crowd the Surfer’s Paradise. The Gold Coast becomes more like a hormone-fuelled crowded hub more than what it is actually supposed to be. Gold Coast is not one of the places that deserve to be experienced for anything less than the actual magnificence it is.

10. Do Not Believe The Drop Bear Stories

Drop Bears are Koala-like animals that live in trees and can drop on anyone, anytime. But one common thing you might notice about Drop Bears is that you never hear the first-person encounter, it is always someone’s friend or distant relative on whom the Drop Bear chooses to drop. To clear all your doubts beforehand, this story is just an instance of Australia’s sense of humor.

The Australian locals are a friendly lot, their slang might convey otherwise to a foreign visitor. But you eventually get used to the colloquialisms and start cherishing it. Australia is a repository of rich flora and fauna. All you need to remember is to respect nature’s boundaries. Book your trip to Australia at the earliest and make sure to keep this list of things not to do in Australia handy with you.

Hanoi In Winter 2020: Top 13 Things To Do In This Vietnamese Capital During Winter!

18 Best Things To Do In Chandigarh That Will Make Your Getaway Frolicsome In 2020!

20 Romantic Things To Do In Phuket In 2020 For An Enchanting Beach Vacay With Your Loved One!