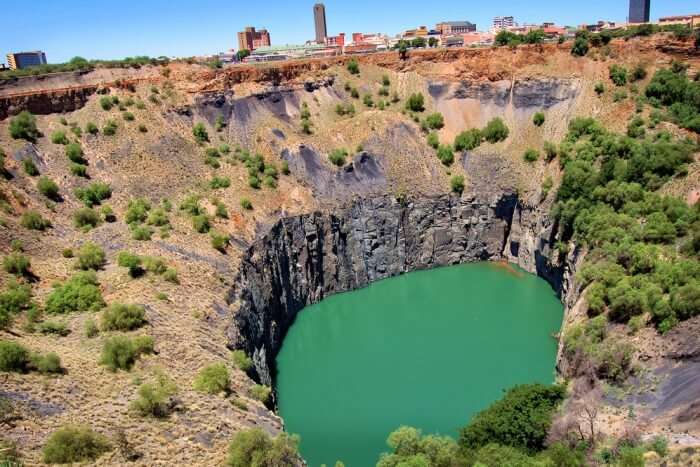 Kimberley is almost thrice of England’s size. This ancient landscape, which covers thousands of acres of land, is sadly also the world’s last forms of an independent wildlife land. Be ready to find abundant wildlife, yawning canyons, fresh swimming holes, and several outback stations. Here’s an exhaustive list of things to do in Kimberley .

Top 13 Things To Do In Kimberley

Despite being a remote area, it’s also a place to find tasty food, friendly locals and romantic beach towns on the globe. We’ve shortlisted top 13 things to do in Kimberley:

One of Kimberley’s major attractions, this now amazing hole used to be a hill with a flat top. One of the largest excavations to be dug by hand, it measures 215 meters deep and covers an area of 17 hectares and a staggering perimeter of 1.6 km. The Kimberley Mine site was excavated over a long period of time, from 16 July 1871 to 14 August 1914. After excavating 22.5 million tons of excavated earth, the site gave up diamonds weighing 2,722 kilograms. The Big Hole is now a magnificent open-air museum encircled by pristine buildings transported from their original sites.

Must Read: 11 Best Places To Visit In Kimberley For A Captivating South African Tour

The DaRiva comprises of a world-class kitchen and genial accommodation. The spacious top deck comprises of a barbeque facility and even a skipper at your service. 50km of fishing waters with diverse bird life. If fortunes favor you, you may even spot the Vaal River’s own Big Five: the Otter, African Fish Eagle, Giant Kingfisher, Goliath Heron, and Iguana.

The William Humphreys Art Gallery is an art museum. It pays homage to South African art. It also serves as an educational center for cultural activities to the community. It organizes various events, mainly focused on the stimulation and growth of young children as well as the unemployed women.

The cellar started producing wine in 1977 after harvesting the first grapes in the area. Visitors can taste wine and before purchasing a bottle or two of their choice. They even offer tours of their cellars. They have a wide range of choices like "Elements" & "Overvaal".

Make sure to visit the town hall of Kimberly for its stunning architecture. Built in 1899, before the Anglo-Boer War, this marvelous piece of marble behemoth was designed by Fergus Carstairs Rogers. The majestic town hall is situated on Old Main Street. Its cream and white color makes it easily visible. You can board the tram to travel to other places in Kimberly as there’s a stop right outside the town hall.

It was the brainchild of Sir Herbert Baker, who was commissioned to design this building by Cecil John Rhodes. It commemorates the people who sacrificed their lives in the Anglo-Boer War. It is also the place where 27 men were buried.

These trams will take you back into the 19th century, to offer what the South African hub of activity looked like before it was transformed into one. When diamonds were excavated in 1871 in this small and untamed part of the world, the world took notice, as people flocked to the area to try their own luck. These pristine trams, with their original wooden seats, offer a 20-minute visceral ride through the atmosphere of the gold rush at the time.

Established in 1890, the Kimberly Golf Club celebrates the rich history of the sport in South Africa. It is here that the Freddie Tait Golf Museum, the first golfing museum on the continent, can be found. Here you’ll encounter the first golfing museum ever built in the entire African continent, the Freddie Tait Golf Museum. It was built to pay homage to the golf champion Freddie Tait, who was also one of the many people who lost their lives in the Anglo-Boer War in 1990.

This 19th-century house lives up to its haunted reputation. Built in the 1880s, it was considered one of the most paranormally afflicted houses in the country. It was renovated quite often, even though it was meant to contain only four rooms until it became the magnificent manor with a veranda. Referred to as ‘The Bungalow’, Rudd house was built on the site of the residence of Cecil John Rhodes’ business partner Charles Dunnel Rudd. They co-founded Gold Fields of South Africa Ltd.

Suggested Read: 15 Things To Do In Stellenbosch That Are Worth Experiencing On Your South African Vacay

This used to be the residence of the first Secretary-General of the African National Congress, Solomon Tshekisho Plaatje. He was the first black South African to write a book in English. A Tswana speaker, he was well versed in European languages like Dutch, French, English, and German as well as African languages like Sotho, Afrikaans, Xhosa, and Zulu. This is an extraordinary achievement for its time as black people weren’t allowed the rights to education that whites were. The Sol Plaatje Museum and Library was built as a tribute to this man and his contributions to society of overcoming racial inequality in South Africa. His home and grave were declared National Monuments in 1992 and 1997, respectively.

One of Kimberley’s little-hidden treasures caches, the Duggan-Cronin displays some of South Africa’s best photographic skills and pieces. South Africa is subsequently home to several tourist attractions, mostly related to mining. However, this gallery gives locals and tourists, alike, a glimpse into the diverse culture and history in a rather intimate setting. Duggan-Cronin, an Irish miner in Kimberley, bought his first camera in 1904 and started photographing the mine workers. Later on, began to travel extensively in search of more stimulating and thoughtful images. He was subsequently given the name Thandabantu, meaning “someone who loves people” in the Matabele language. It is also the name of the permanent exhibition at the gallery that has put up on display the many faces and lives of ancestors of South Africans. There are more than 7 000 negatives being preserved at this gallery.

Located almost 430km from Johannesburg, the Benfontein Nature Reserve is the only place in South Africa where you can find Africa’s smallest cat - the black-footed cat. Being a citizen of the night, it is the only time you can grab a look. The Black-footed cat, or Felisnigripes, is just marginally bigger than the average house cat. It has been an endangered species since 2002. Its habitat is suited to the open grassland and savannas of Namibia and South Africa and is therefore endemic only to the southern part of Africa.

13. Kimberley: Let your hair down at the local watering hole

Popularly known as The Half, The Halfway House is a bar and beer garden that is a beloved hub amongst locals as well as tourists. This building traces its root to 1872 when it was established on the road connecting two major diamond mines to cater to the tired, hot miners in need of an ice-cold beer.

We hope this list helps you to find that motivation to take a few weeks off from the dreary office hours. Book a trip to South Africa and check out these famous things to do in Kimberley. Happy sightseeing!