Top 7 Waterfalls In Himachal Pradesh That Treat Your Eyes To The Best Sights Ever! 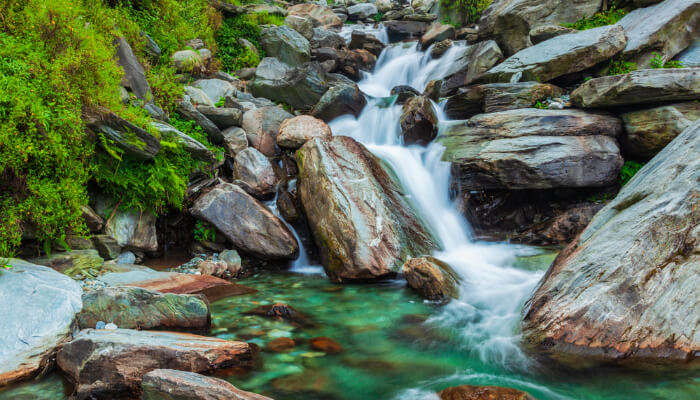 Much famed as the Bhagsu Falls, the famous Bhagsunag Falls is one of the most refreshing waterfalls to visit in Himachal Pradesh. Located in the Bhagsu village, this waterfalls is also home to the famous attraction of Bhagsunath Temple in the heart of Mcleodganj. Dedicated to Lord Shiva, the temple also happens to be a significant site for Hindu pilgrims.

Must Read: Barot Valley: Explore The Rising Hub Of Adventure In Himachal At Its Best With This Detailed Guide!

Considered to be one of the hidden gems of the hills, the Jana Falls is one of the best waterfalls in Himachal Pradesh which is yet to be explored. Surrounded by deodar trees, apple orchards, and snow-bound mountains, Jana Falls is renowned for its breathtaking views, and stunning beauty. Located in the Jana village, it is located at a distance of about 30 kilometers from Manali and makes for a great escape for the adventure enthusiasts.

The beauty that nature has bestowed in abundance to this place will make sure you are stuck in time. Located on the route to Rohtang pass on the Leh-Manali Highway, Rahala Falls is set at a distance of about 16 kilometers from Manali. These falls is surrounded by lush and dense forests apart from which, it happens to be a part of melting Glaciers. The striking views and the sheer silence not only makes it one of the recommended spot for a beautiful escape in Manali but also one of the best waterfalls in Himachal Pradesh.

Located at a distance of just 7 kilometers from the Queen of Hills, Shimla, Chadwick falls is set at an altitude of about a mile. And it is due to the cascading waters from such a great height that rocky valleys have been formed naturally at its base. Another interesting fact is that some of the locals believer, that the Gods imprisoned a demon behind the rocks and it is from the mouth of this demon that the water flows. Though it may send a bit of chill down your spine, the attraction still remains one of the best waterfalls in Himachal Pradesh.

Suggested Read: 5 Types Of Offbeat Stays In Himachal You’ve Been Missing All This While

Though not many people are aware of this attraction earlier, it is only from the past few years that Dharamkot Waterfalls has gained much fame. Considered to be a haven for the adventure enthusiasts who love trekking and hiking, one can reach this waterfall by trekking from the point of Gallu ka Mandir in Dharamkot. Yet to be explored by the world full of travelers, it is indeed one of the serene waterfalls in Himachal Pradesh.

Located at a distance of about 25 kilometers from the Gramphu town, it is one of the most fascinating waterfalls in Himachal Pradesh. Set on the Leh-Manali highway, chances are very high that most of the travelers are still unaware of such a beautiful attraction. While it takes about twenty minutes to reach the waterfalls from the highway, the waterfall is surrounded by dense vegetation and lush greenery all around that adds the much needed charm to the beauty all around.

Considered to be a sacred waterfall that is named after a village Goddess Jogini, this is a must-visit waterfall when in the hilly paradise of Manali. While the shrine of the deity is placed below the falls, one will have to trek from the ‘Vashist Temple’ which is located in Kullu valley to reach the falls. Taking you through pine forests, streams, and apple orchards, it will take you about an hour or so to complete the trek and relish the beautiful views that await on top!

With such awesome waterfalls in Himachal Pradesh, how would one not crave to visit these mesmerizing locations? Pack your bags and get going to this hilly paradise so that you get to witness the city’s wonders combined with the beauty of nature. So on your next trip to Himachal, make sure your itinerary lacks nothing when it comes to the best waterfalls in Himachal Pradesh!

Q. How do I get to Jogini Falls?

A. Jogini Falls is located at a distance of 4 kilometers from Vashisht Temple and if you are heading here from Manali Bus Stand then the entire distance will be 7.5 kilometers. You can take any mode of local transport to these mesmerizing falls.

Q. What are the best monuments in Himachal Pradesh?

Q. How many zoos are there in Himachal Pradesh?

Q. Which is the best waterfall in Himachal Pradesh?

A. There are numerous mesmerizing waterfalls in Himachal Pradesh out of which the best waterfalls are Jogini Waterfall, Bhagsu Waterfall, Zana Falls, and Jana Waterfalls.

Q. Is it safe to visit Himachal Pradesh waterfalls during monsoon?

A. Monsoon is the most amazing time to explore the enticing beauty of Himachal Pradesh. However, there are reports of landslides and cloud bursts during monsoon in this region and it is advised to check the weather forecast before heading to your destination.

Q. Are kids allowed at waterfalls in Himachal Pradesh?

A. Yes, kids usually have the best times at these waterfalls. They can bath here and have perfect family time!

Q. Which is the highest waterfall in Himachal Pradesh?

Q. Is there any natural waterfall in Himachal Pradesh?

A. Yes, most of the waterfalls in Himachal Pradesh are natural and remain alive throughout the year because of the thriving rivers of the area.

Manali In Winter 3 Days In Manali Waterfalls In Uttarakhand

10 Places Near Dalhousie 2020: For A Refreshing And Rejuvenating Trip

Nikhil & His Wife Just Needed A Couple Trip To Himachal To Embrace Their First Snowfall Experience!

Pawan’s 4 Days Couple Trip To Shimla Was All About Snow, Food, Romance & Activities!

5 Mesmerizing Waterfalls Near Coorg To Visit In 2020 That Will Melt Your Heart!

30 Best Hill Stations In Himachal To Experience Pure Bliss In 2020!