10 Wedding Destinations In Europe For Your Big Day In 2019! 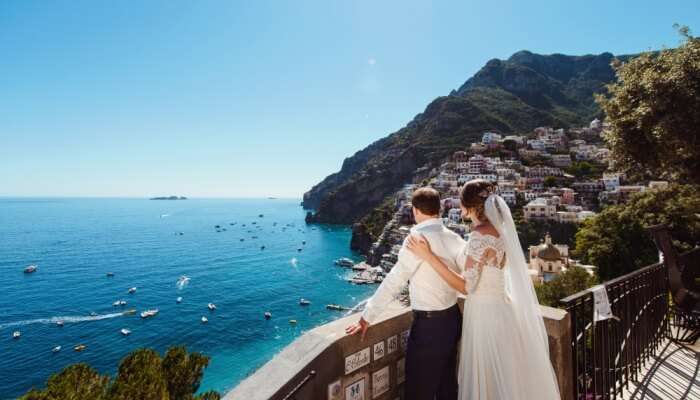 Congratulations on making it past the nail-biting proposal! All that’s left for you to do is to organize a wedding. Sounds simple, right? Planning a wedding and, more importantly, choosing a wedding destination is no mean feat. To ensure you get the fairytale wedding you have always dreamed of, we have compiled a list of mindblowing wedding destinations in Europe. We hope this compilation helps you kick start planning for your special day.

Go through our list of 10 stunning wedding destinations in Europe that are known as the crème de la crème of European wedding places to pick a place that suits your personality:

A wedding in Tuscany is a chance to take in rustic landscapes that have barely changed in decades, tracing paths between renaissance towns, lemon groves and classic Italian monasteries. A patchwork of vineyards, olive groves and citrus orchards produce gorgeous aromas and gift the region with high quality ingredients that make its cuisine so delicious.

Explore the most romantic places to visit in Europe, from Paris to the Venice canals, and from the Greek islands to the Swiss alps. Book customized packages Inclusive of airport transfers, cab, resort, sightseeing, and meals offered by expert agents on TravelTriangle. Book Now!

Porto, claimed to be one of the cheapest wedding destinations in Europe, has a little something for everybody. The weather is wonderfully pleasant from April all the way until the end of September – the hottest months of the year being July and August, in which the Atlantic tide is much more enjoyable. The Douro Valley is one of the best places to get married at. It is alive with vivacious, charming characters that embrace life to the full.

Paris has to be one of the most romantic wedding destinations in Europe to tie the knot. And even if you’re already married, it’s a wonderful place to choose for renewing your vows. French law requires that before a wedding ceremony takes place in a church in France, you need to have proof of a civil marriage. Make sure you have that before you make a beeline for the City of Love.

Whether you marry in Amalfi, Vietri Sul Mare or Sorrento, you can revel in the blue skies, emerald waters, warm breezes and a sense of a bygone era in all of these spots. You can sail the gentle Mediterranean waves aboard a gozzo, an Italian wooden boat, to the private beaches around the town of Conca dei Marini to spend a blissful afternoon. It is, hands down, one of the best wedding destinations in Europe.

Suggested Read: 15 Romantic Wedding Venues In India For Tying The Knot In 2020

There’s nowhere else in Britain quite like Edinburgh. In fact, you could argue there’s nowhere else in the world like it: from the medieval buildings that cling to the Royal Mile to the extinct volcano that looms over the city, it’s a place filled with unexpected charm. It was even dubbed the ‘Athens of the North’ in the 18th century.

Over one thousand weddings of couples from other countries took place on the spectacularly beautiful Greek island of Santorini this past summer. And the trend shows no sign of abating, as the number of couples who desire to marry on the Aegean island increases every year. The beaches of Santorini are a good spot for a dip to take a break from the wedding stress. It is one of the most beautiful beach wedding destinations in Europe.

Suggested Read: 10 Mountains In Europe That Will Put To Test All Adrenaline Junkies In 2019

Lake Como is the third largest Italian lake and one of the top wedding destinations in Europe. It is famous all over the world for its wonderful and romantic landscapes and is considered as the perfect destination for a luxury wedding in Italy. On its shores you can find many picturesque villages, like Bellagio, Menaggio, Lenno, Tremezzo and Varenna. These villages are full of beautiful villas and gorgeous gardens.

Suggested Read: 7 Food Festivals In Europe To Add To Your 2019 Bucket List

With its ancient and medieval walls overlooking the crystal turquoise waters of the Adriatic Sea, the Old City of Dubrovnik is a sight to behold. It has been listed as a UNESCO World Heritage Site and is rightfully called as the ‘Pearl of the Adriatic.’ Its beautiful Gothic, Renaissance and Baroque architecture has also been featured as the backdrop of King’s Landing in ‘Game of Thrones’.

The largest of the Balearic islands, Mallorca is one of the most beautiful wedding destinations in Europe. It has plenty to delight the upscale adult traveller. An area of outstanding natural beauty, it offers sandy beaches, crystal-clear water and rugged coastline against a backdrop of magnificent mountains that are a magnet for people who are planning to tie the knot. Whatever you want from your wedding, the possibilities are endless in Mallorca.

Suggested Read: 10 Best Destinations For Rock Climbing In Europe In 2019

The best time of the year to get married in Venice is from April to October. However, this is actually the period when the majority of brides and grooms gets married here. If you plan to marry your better-half during the wedding season, you might want to start thinking about it in advance. If you don’t mind to get married out of the typical wedding season, you’ll probably have the chance to pay a bit less.

Further Read: 12 Traditional Festivals In Europe That Will Up The Fun Factor Of Your Euro-Tour In 2018-19

Is there a better way to celebrate your love than getting hitched in Europe? We don’t think so! Our compilation of wedding destinations in Europe will make your special day memorable. Europe’s abundance of iconic sites and evergreen hills serve as the perfect backdrop for a destination wedding. Book your European holiday with TravelTriangle to get married in style!

This Winter, Escape To The Best Honeymoon Destinations In Europe In Winter 2020!

22 Chilling Winter Destinations In Europe That’ll Melt Your Heart In 2020!

Tomorrowland Belgium 2020: All You Need To Know For Experiencing The Ultimate Music High!

The Czech Republic In January 2020: A Mini Guide To Explore This Country’s Magnificent Views