Wildlife In Alaska: Spot The Enchanting Flora And Fauna In The US Land That Has It All! 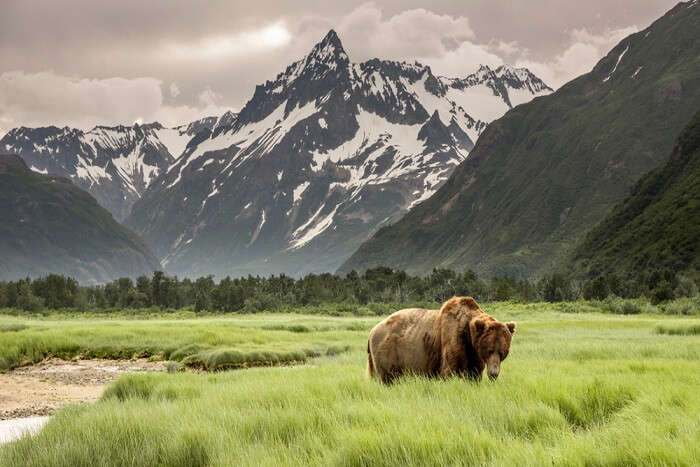 If there is one place which is rich in fauna- it is Alaska. Owing to its oceanic climatic conditions, tidal shorelines and the very nature, it brews wildlife like nowhere. In fact, Alaska wildlife is one of the richest one enriched with a variety of species. One will be surprised to know that more than 1100 vertebrate species and more than 3000+ marine species exist in their environment. Though there is no proof of how many animals live in Alaska in terms of exact numbers, one can safely point out that they are plenty.

Some facts show that approximately 115 mammal species breed in Alaska, which eventually makes it the 12th mammal diverse country in the USA. All the more, some of the unique mammals and birds are found here, owing to the coastal areas, which foster breeding. Alaska’s nature and the environment is full of life which is eventually cast in the flora and fauna of the country

About Wildlife In Alaska

Wildlife in the nascent form reflects the true creation of God. If planning to visit Alaska with family or friends, one should truly explore wildlife which levies nothing but pure bliss. There are so many Alaska animal facts that make them unique in their own way. But before plunging into them, here is a list of Alaska animals. Brown bear, Polar bear, grizzly bear, Kodiak bear, black bear, caribou, moose, Mountain goat, bison, Dall sheep, orca to name a few.

Amongst the marine ones, the most famous ones are Salmon, Rainbow trout, char and grayling, halibut and lampreys, lingcod, black rockfish, salmon shark, sculpin, Pollock and pacific Herring. Myriad species of birds are inhabitant of Alaska which includes Bald eagle, snowy owl, rusty blackbird, osprey, Canada goose, great grey owl, king eider, common raven, horned puffin to name a few. And then of course, there are certain endangered species and every special care is being taken to ensure their safety.

10 Animals To Witness The Wildlife In Alaska

While the mammals of Alaska are great to look out and explore, here are some fun facts, which surely will change your viewpoint about them. So, take a look at this list to know more!

While whales are mammals which are generally thought of as predators, there is something interesting about them. It is believed that before mating, the male humpback whales produce some kind of songs that have tunes in line with the ballad. The song can last for a few minutes to that of half an hour. And yes, every year a new song is prepared.

Must Read: 12 Hot Springs In Alaska That You Should Visit to Unwind Your Inner Zen!

What makes Dall Sheep unique, is the way they are able to survive in these climatic conditions. Generally, they live up to 10 years, though females have been reported to be alive till 19 years. Their horns contain rings in them and each ring represents a year. So, in order to know the age of a Dall sheep, all you need to do is to count the rings on their horn.

Another special mammal in the list of wildlife in Alaska is the caribou, which is, basically, the reindeer. What makes them different is that in caribou, both the males as well as the females have antlers over their head. They do shed them at the appropriate time. Males generally do it after the fall, while in the case of women, age plays a role and the older women tend to shed them.

Suggested Read: Christmas in Alaska: Top 9 Places To Visit To Witness The Best Of Christmas

Also scientifically called Polystictastelleri, it is actually a seabird which is found along the coast of Alaska. They are considered to be the smallest eider, with a length of merely 45 cm. The male is known by its spectacular white head, while the female can be spotted owing to her dark brown coverage. There breeding habits lure them from the coastline of Alaska, US to Baltic Sea during seasonal variations. During the past era,a considerable drop in their numbers has put them in the endangered species category.

Sometimes also called as Stellers Albatross, the scientific nomenclature of this species is Phoebastriaalbatrus. It is related to the North Pacific region and is known for its short tail and pink or bluish beak. Its feathers are mostly white with a hint of blackness on covets. It has been declared as an endangered species, and hence, special care is taken to protect them.

Suggested Read: 10 Casinos In Alaska For Those Who Want To Have Some Fun In The Snowy Paradise!

Grizzly bears are known for their white tips which showcase on the back and feet of this mammal. However, what makes it interesting is the fact, that its sense of smell is very strong, even stronger than that of a bloodhound. So, yes it can smell you and your fears, so while looking at them just be prepared. All the more, its claws are very long, in the same lines as that of the human fingers. There are almost about 30,000 grizzly bears which makes it one of the largest inhabitants in the country.

A very cute animal, the polar bear is known for its distinctive white fur. Its habitats mostly in the ice sea and hence is sometimes also referred to as the maritime animal. It weighs about 350-700 kg and is 2.4 to 4 meters long. This is one mammal which though had a good number of species in the beginning years has marred down to a great extent in the recent times thus coming to the verge of extinction.

Suggested Read: Shopping In Alaska: To Pamper Yourself With The Best Of Retail Therapy!

Scientifically known as Somateriafischeri, the spectacled eider is a relatively large sea duck which is mostly found on the coasts of Alaska. The male has a distinct white body with a head that is yellowish green in color, while the female is brown in appearance. This species has very few birds left and hence is enlisted in the endangered species list.

Wood bison is one of the largest Alaska mammals with a height of 11 ft. and weight of approximately 1.179 kg. Long and stronger horns with pelages are its trademark. It is endangered mostly because of hunting and hybridization with the normal bison and other stock animals.

Suggested Read: Alaska With Kids: A Detailed Guide For Your Little Ones!

It is an endangered Alaska origin fern which is known to belong to the Polystichum genus. It grows about 6 inches long and has about 20-25 leaves. Its characteristic is the fibrous root. Owing to the climatic conditions, it is now endangered. So, if you’re in mood to spot some of the rare forms of flora, this is surely the one thing to look out for in this land!

Counted amongst one of the species of the 8 curlew ones, Eskimo curlew belongs to the genus called the Numenius. It is about 12 inches long and is known for its long bill which is curved a little towards down. Classified as a shorebird, it is now considered almost on the verge of extinction. But, if you’re lucky enough, you might just be able to spot a few in this area.

Suggested Read: Alaska Travel Guide: All You Need To Know For Planning Your Dream Vacation!

Northern sea otter is generally found in the southern coast of Alaska and has been reducing its population since the 1900s. They belong to the weasel family and is considered as one of the heaviest mammals. They are also the second smallest animal in the marine category. Their specialization is their fur cover that encapsulates them, unlike bubble formation, which is generally the case with sea creatures.

Further Read: 10 Zoos In Alaska Which Will Give A Glimpse Of The Diverse Wildlife At This Nature’s Paradise!

For exploring the wildlife in Alaska, there are various online portals which can be reached out for planning your visit. In fact, family groups can also be planned. There is nothing better than grazing nature in its purest form. And yes, next time, keep these pointers in mind and enjoy the rich fauna of Alaska, which is worth treasuring. Book your trip to Alaska for a thrilling holiday amid the scenic landscapes of this land!

What are the opening and closing duration of Alaska Wildlife Sanctuary?

The opening and closing duration of Alaska Wildlife Sanctuary is between 10 AM to 4 PM. It is closed on Tuesday, Wednesday, and Thursday.

What species are found in Alaska Wildlife Sanctuary?

Is there any zoo in Alaska Wildlife Sanctuary?

Yes, the zoo is in Anchorage with more than 2,00,000 visitors per day and it is approximately 25 acres of area.

What are the three events held for wildlife in Alaska?

What kind of animals I can find in Alaska other than in the Sanctuary?

How much time can I spend in Alaska Wildlife Sanctuary?

You can spend up to 1 hour in Alaska Wildlife Sanctuary.

How many species can you find in Alaska?

With the help of whom, Alaska Wildlife Sanctuary is made?

By the research, conservation, education and quality animal care Alaska Wildlife Sanctuary is made.