5 Legit World War 2 Sites In Europe That Are A Must-Visit For All! 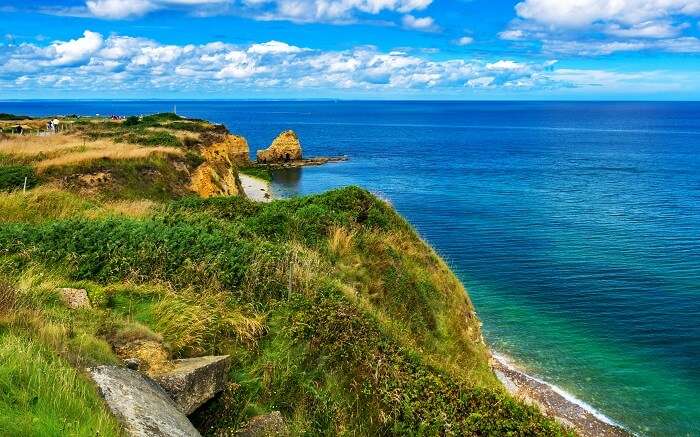 For those you’ve grown up watching the documentaries on the European history, and if your love for history knows no boundaries, then it is likely that a trip to Europe will treat your inner history buff very well. The history bits can be intriguing and to witness it ‘live’ is a rare visual retreat. Europe is a place full of cautiously kept ancient remains whether it is an old church in the main town or a historical building with age-old relevance.

There is always something to be seen from the past of Europe’s each city and some of the must visit places are that of the World War 2 sites in Europe that lie deep and buried in the dark ages.

Other than being historical in nature, these sites offer bright sights and breath-taking landscapes which not only offer a historical reason to tour the place but also a scenic background, civilized culture, recreation facilities, and an overall pleasantry aura to learn about its history, comfortably at our own convenience.

Much of the Second World War movement was led and dominated by the Nazi Regiment under the command of Adolf Hitler. Hence, the Holocaust period or the Jewish part of Europe’s history is of great relevance that has been preserved through these World War 2 sites in Europe in order to relate to its great past.

This is the place where the war took place on the beaches. Dunkirk lies to the north of France and is famous as it was here where the British and French troops fought against the German army during the World War 2. The Dunkirk evacuation eventually led to the defeat of the German troops. It was nothing short of a miracle when the British, Belgian, and French troops were isolated on the Dunkirk beach and harbour.

Today, a tourist has an option to catch a ferry from Dover to Dunkirk and explore the battleground while visiting the famous beaches of Dunkirk. There is also a famous Dunkirk 1940 museum which houses the war artefacts to walk you through the beach battleground. In addition to that, the visitors must tour the war sites like the Port Museum, three boats of Duchesse Anne, the barge guide, the lightship Sandettie, the Saint-Éloi church, and the town hall.

Also, a boat trip to explore the port and understand its installations is a good way to learn about the past and enjoy the beach touristy flair. There are other places of interest, giving tourists enough time to indulge in the history of the place by relaxing on the fine sand beaches and enjoying the beauty of the shore.

Must Read: In Pictures: 30 Most Beautiful Cities In Europe That Will Make You Want To Take The EuroTrip Now!

Located near the Austrian Border, Berchtesgaden is a town full of scenic and mountainous beauty. So much for the relaxing nature of Berchtesgaden, that even Nazi officials including Adolf Hitler could not ignore the place. As a result of this, the town emerged as the secret ground for official and personal gatherings of the Nazi regiment.

Much famed as Hitler’s mountain hideaway, Berchtesgaden is popularly called the Eagle’s Nest which has a monumental entrance and takes its visitors through a tunnel and then in a brass elevator, that connects up till the Obersalzberg headquarters. There is plenty to watch and observe here about Hitler’s luxurious stay and taste. The Documentation Centre, and the original Obersalzberg construct including the living room and windows, are a must visit for the history buffs.

Beyond the concrete walls, there is enough ground for recreation and relaxation. The open-air café surrounded by the magnificent Bavarian mountain display is both picturesque and fresh to soak in all the touristy vibes.

Suggested Read: Summer In Estonia: A Pocket Guide For A Tour Down The Country’s Most Extra Places

Lying ahead of the Prague Old Town is the Jewish Quarter. There is enough space to walk you through the Jew history including the Children’s Museum, four synagogues, and the most infamous Jewish Cemetery. You can embark on a specified history tour starting from the Old Town, enjoying the scenic landscapes of Prague, and then head to the Jewish Quarter to get a glimpse of the history of Jews who suffered a massive community destruction under the Nazis led by Adolf Hitler.

The first sight of the Jewish Cemetery will give you goosebumps and a fair idea of what transpired during the Hitler regime, before and during the World War 2. There are layers and layers of tombstones built on a small acreage as the war atrocities were so much that the Jews were not given enough space to bury or pay homage to their loved ones. Because of which, over 12,000 tombstones were laid over each other in a makeshift sort of arrangement. There are tombstone overlapping one over the other so that it appears to be death and human criminality further marginalized to the visitors.

It is heart-wrenching and evoking to note that Jews were so helpless during this period that they did not even have a burial ground to put their loved ones to rest. On a positive side, the site tour is a refreshing sight of how people lived during this time. The beautiful row of houses, the stunning synagogues, and the small boutique shops that sell the Jewish garments or accessories are a must visit.

Suggested Read: 6 Most Romantic Places In Central Europe For Couples

Dachau is a popular medieval town as well as a residential area in north-west zone of Munich that houses one of the memorable World War 2 sites in Europe of the Dachau Concentration Camp. It is a must visit for those who are keen to catch a glimpse of how Nazi camps were organised to hold the political prisoners.

The Dachau Camp gives a clear picture of life at the camps, their lodge facilities, their work-life, the prisoner hierarchy, the gas chambers, the cremation ovens, and the memorial shrines. In short, anything and everything one may need to know about the human atrocities done in a Nazi Camp can be traced here.

Much of the original construction and its layout has been kept intact. It is a visual retreat for history experts. There is a documentary show and there is a museum, which provides enough dope on the history from the camp period till the World War 2.

Besides the camp history, the town of Dachau is a hidden gem from the past. The complete layover of the place is a pleasant walkthrough, especially for people who seek solace and some time away from the crowd. With around 45,000 people living here, Dachau has many open-air cafes that offer a relaxing vibe to chill with your loved ones. Also, it houses an 18th-century Renaissance castle with a lovely lookout garden that is located on an elevation and serves as a prominent spot in the otherwise unwinding town streets.

Normandy in Paris is often flocked by the travelers who love beach destinations as this city serves as a home to many beaches where the World War 2 was fought. The famous Omaha Beach has reserved memories of the war and many things to learn through stories and historical facts. There is also a visitor centre which will guide you through other World War 2 sites in Europe like that of the American Cemetery, the Caen Memorial, and so on.

It is advisable to appoint a guide and take a guided tour in order to learn more about the sacrifices made during the war, which ultimately led to freedom of the French Citizens. Your visit to Normandy from the city centre of Paris will be full of exquisite countryside views. Also, make sure you stop on your way to the French northwest coast, to explore the historical Caen Memorial which is a site devoted to the war memories.

Your next stop would be the German defense site of Pointe du Hoc that commemorate the fight between the German and American troops. Post that, you can also visit the American Cemetery which serves as the burial ground for US military members.

Further Read: 20 Best Places To Spend Christmas In Europe Where Festivities Breathe Magic Into The Air!

Intrigued much? Apart from walking through the rich history of the place, relish the scenic beauty of nature in the backdrop while exploring the charm of these historical sites and take respite in the small pleasures of life on your next trip to Europe.