Summer In Estonia: A Pocket Guide To This Country In Northern Europe In 2021 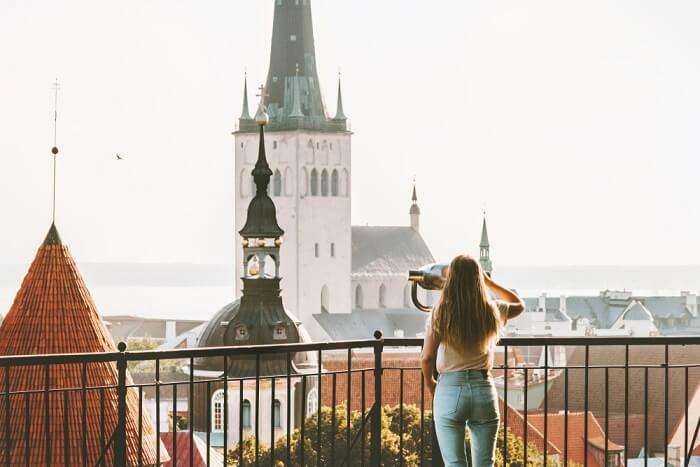 Estonia, as a country, is unique in every sense. First of all, it is not the same as Latvia, as it is assumed to be by many. The language there is also different, and not typical Finnish and last but not the least, the architecture of this little country is also unique. It has also been connected with Russia so many times, but this charming country is nothing like its neighbour. Dotted with Old world charm and architecture and natural beauty, the capital city is of Tallinn, especially is a crowd-puller. Summer in Estonia is the perfect weather to enjoy the beautiful landscapes and architecture of this yet-to-be-explored country.

Weather In Estonia During Summer

Wondering about Summer weather in Estonia? Summer in Estonia is just perfect; it is neither too hot nor too humid. It starts in June and goes all the way to August. The summer temperatures in Estonia, even in the hottest of months does not cross 26*C. One natural phenomenon that you will be witness to if you visit July is the White Nights, and it is not often that you even hear of it. Summer holidays in Estonia are the best season to explore this country.

Summer in Estonia 2021 is pleasant and is considered healthy too. There are so many places that you could explore in this beautiful and unique country. Here is our pick of some of the spots you should definitely not miss out on.

This is one of the best places to visit on yoursummer holidays in Estonia, after all, it is known as the summer capital and is the coastal resort city of Parnu. The place is family-friendly. The main attraction is Parnu Beach and in the summer, it is the crowd-puller, with its promenade, play area for children, mini-golf and the likes. You could either indulge in some beach sports like volleyball or soak in some sun, lying down at the beach. It is also preferred destination for families with kids as the water here is shallow and great for a nice swim.

Also in the town of Parnu, is the Sooma National Park. It is a bog and a swamp and has a number of things to see within the park premises. One of the most popular happens to be The Beaver Trail, where you actually get to see beavers in their natural habitat. It is also home to a variety of birds. After all that trails, if you want a break, you can also indulge in one of those mud-baths, one of the other things that Parnu is famous for.

Must Read: Experience Estonia Nightlife At Its Best By Visiting These 15 Places

The Old Town in Tallinn is what pulls the crowd; it is a UNESCO World Heritage Site. It is an eclectic mix of both the old and new and is a must-visit when you are there in the capital city. It is divided into two areas – lower town and upper town. The most popular spot in the old town is the Town Hall Square; the Town Hall has existed since 1322 and it is in this square, you will find Europe’s oldest continuously-operating pharmacy, which has been in existence since 1422.

Apart from this, there are plenty of churches in the city of Tallinn. If you want to get the best view of the city, head to the upper town called Toompea, from where you can catch a great view of the entire city. Also, don’t miss out on visiting the Tallinn TV Tower, which houses an outdoor terrace, cinema hall, a mini TV studio and a gift shop among others. Since it is summer, you need to head out to Pirita Beach, the biggest in Tallinn. It has changing cabins, lockers, and also playgrounds for children.

The castle looks grand, but it not just another castle. The castle, which has been in existence since the 16th century. It is now a theme park, and the fun part is visitors and staff alike, roam around in medieval era costumes. It is like you have stepped into a medieval era village - knights polishing their armour, alchemists in their workshop and also a wine cellar – this place gives you a sneak peek into the era, that we only read about in books. see an alchemist’s workshop and tour the ancient wine cellar. Not just that, you could also have a taste of the medieval era, literally. They serve the food of those times. It cannot get more exciting than this.

Suggested Read: 12 Fascinating Things To Do In Estonia All Year Round

This is a small city in Southern Estonia in Europe and is historical in a sense. One example is the ruins of the Viljandi Order Castle and this is a major attraction. It goes way back to the 16th century. It has stood strong through so many battles over the years and now, it is just ruins that you will find, but there is beauty in those ruins too. You could take a stroll around the ruins and relax in the park surrounding the castle.

The view of the Viljandi Lake atop the castle is just spectacular. But, the main reason that you need to visit Viljandi, during summer, is the city is host to annual folk music festival. Every year in July, people from across the country and even tourists flock this little city to witness the grand festival and enjoy some folk music. This is considered to be the largest music festival in the entire country.

This city is known for its University. It is also the oldest city in this lovely country. The Estonian National Museum in the city is definitely worth a visit which gives you a sneak peek into their lives and what are the items that they used in daily life. The two permanent exhibitions – Encounters, which is an exhibition about ordinary Estonian people who have lived on this land through the ages and ‘The echoes of Ural’, which is an exhibition into the everyday lives of the Finno-Ugric and Samoyedic people – takes you back into time and is truly fascinating.

The museum also houses a cinema, a black box theatre and a café, among others. What makes the city of Tartu really unique is the place known as the Soup Neighbourhood. In this neighbourhood, each and every street is named after the ingredients in soups. So, there are streets which are named potatoes, beans and the likes. The houses are cute here too as they are made out of wood.

What better place to cool off in summer than an island, with spectacular beaches and spas! Add to it, the picturesque scenery – poppy and orchid fields, windmills – it is heaven on earth. One of the most popular spots here though is the Kuressaare Castle. The 14th century castle is now turned into a museum and the only surviving part of the castle is the convent building. The authenticity of the castle is still maintained though, to a large extent. What draws the crowd though to this island is the Kaali Meteorite Crater.

It is believed to have fallen around 7500 years ago. It is a hit among occult groups too, since evidence was found in way of bones of domestic animals, scattered around the site. Eerie…isn’t it! The crater though is a huge draw here and is spectacular at that. If you are feeling up to it, you could also go hike across the Sõrve Peninsula, which offers some great views and also a lighthouse.

Suggested Read: 12 Best Places To Visit In Estonia In 2021 For Seeking The Ultimate Adventure

This is yet another seaside resort and is apt for a summer break. The Haapsalu Castle is one of the many things that you would find interesting in this charming little town. The Bishop’s Castle, as it is called, now lies in ruins. What is interesting is that there is a famous Estonian character living in this castle – a ghost named the White Lady, has been spotted by many in the moat. In summer, this castles hosts many events. While the castle museum is closed for conservation, the castle grounds and the Cathedral are still open.

You could also visit the Railway Museum while you are there, where you can hear the sounds of the locomotives of the station, which existed in the early 1900s and find out the history of the Estonian railways. You could also meet and have a little chat with the ‘station master’. Haapsalu is also famous for its mud bath and you can visit one of the mud spas for a once-in-a-lifetime experience.

Right from the Tallinn Medieval Days in the second week of July that celebrates the medieval era arts and culture or Parnu Hanseatic Days in the last week of June, there are plenty of summer festivals and summer fun to be experienced in this wonderful country. So, while you’re planning on a summer vacay in this gorgeous land, don’t forget to attend these glorious festivals that boasts of the country’s rich culture.

Further Read: Shopping In Estonia: 10 Marvellous Destinations For All Shopaholics!

Summer in Estonia is a unique experience, as is the country itself. Nature parks, natural wonders, beaches and more – it has so much to offer to travelers who come to this unexplored country. So, what are you waiting for? Plan your trip to Europe for an extravagant holiday experience like never before!

Q. What are the best places to visit in Estonia?

Q. What is the best time to visit Estonia?

A. The most ideal time to visit Estonia is from May to August.

A. Yes, Estonia is safe to go on a trip to. The crime rates in Estonia are low though, the capital city of Tallinn is a bit tricky to travel to like any other major city.

Q. What are the best things to try in Estonia?

Q. Why is Estonia so popular?

A. Estonia is a popular country because of the presence of two UNESCO World Heritage sites. The first one being the historic old town of Tallinn that is famous for its wonderfully preserved medieval architecture.

Q. What clothes to pack for Estonia summers?

Q. What are the seasons in Estonia?

A. The winter season in Estonia is from November to March with temperatures dropping to as low as -30 degree Celsius. February is the coldest month of the year. June, July, August and September are the Summer months in Estonia and July is the hottest month.

Q. What clothes to wear in Estonia in winter?