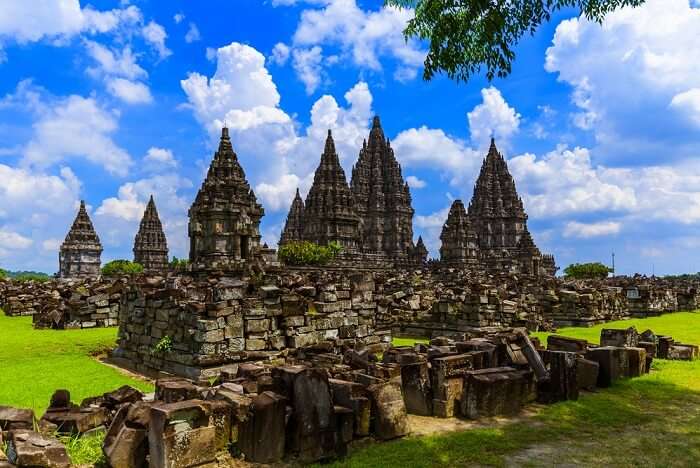 While Java is a busy industrial hub, Yogyakarta– which is also known as Jogja among locals– is Indonesia’s soul. Yogyakarta showcases the island’s rich heritage, that dates back to several centuries. You will hear Javanese at every nook and corner in this beautiful city. Apart from mesmerizing beaches, there are a plethora of magnificent Yogyakarta temples that are several hundred years old and must feature on your Indonesia itinerary.

Yogyakarta temples have recently been resurrected. If you are someone who loves art and history, make sure to visit these temples on your next visit to Indonesia.

A magnificent temple in the true sense, Prambanan is a stunning sight to behold. It is considered to be the largest Hindu temple in all of Indonesia. Prambanan temple in Yogyakarta is dedicated to the Trimurti. Right in the middle of the temple complex is a large temple dedicated to Lord Shiva. The structure stands 47 meters high and is surrounded by not one, not two but 999 individual temples! The perimeter of the Shiva temple is intricately decorated with reliefs that illustrate the epic Ramayana. To the North lies the Vishnu Temple and to the South of the Shiva temple, is the Brahma temple. While modern engineers claim that such a beautiful and complex site would need years of planning and construction, legends say otherwise One among the most interesting Prambanan temple facts is that the temple was built around 850 CE.

Must Read: 10 Vibrant Festivals In Indonesia 2018 That Showcase The Country’s Culture!

Borobudur is unarguably the most ancient and famous temple among the several dozen temples that dot the city of Yogyakarta. This temple is known and lauded for its extraordinary architecture and the many mysteries that surround it. Travelers from across the globe travel long distances to marvel at the mysticism that the temple is synonymous with. Borobudur temple was discovered in the 19th century beneath several layers of jungle and volcanic ash. Strangely, no ancient records about this temple was ever recovered. There are a number of exciting tales that locals tell about this temple.

The most common among them is that the temple was built by Gunadharma in the 9th century. In fact, they claim that you can see the silhouette of the architect taking an eternal break after years of labor. Trek up to the summit of the temple and gaze towards the south. Your eyes will be greeted by a stretch of lush green mountains in a distance that appears to be the form of a resting man. Yet another interesting myth surrounding the Borobudur temple in Yogyakarta, is that the Singa Urung statue has the ability to separate unmarried couples that walk by it. Luckily, according to locals the curse can be reversed if you head down to Kunto Bimo! Sounds preposterous- While the tale does seem a tad bit far fetched, visit Borobudur temple sunrise and be prepared to be mesmerized by the scenic vistas that await you!

Mendut Buddhist Monastery is a ninth century Buddhist shrine that is just 3 kilometers to the easy of Borobudur. It is one of the many temples near Yogyakarta that you may pay a visit if you arent hard pressed for time. Every year during the annual festival that commemorates the Birth of Prince Siddhartha, a grand procession is held around the Buddhist temple area. The prayers begin at Mendut temple after which the chanting parade proceeds towards Borobudur and Pawon temple. Thousands of people congregate and chant mantras and meditate to celebrate this day with fervor. Several rituals are also performed at the temple during this festival. Mendut temple is just an hours drive from the city center, but makes way for an enriching the experience. The drive in itself is scenic, so be sure to carry your camera along.

This 9th century temple complex is located at the Sambisari hamlet very close to the airport. It comprises of one main temple and three smaller temples that surround it. After being buried for hundreds of years under the earth, this temple in Indonesia was discovered in the year 1966. It took 20 whole years to excavate and reconstruct the hundred pieces of stones that together forms the temple. The main temple building is a piece of art as it doesnt have any shoe basement like the rest of the temples in Yogyakarta and Java. The foot of the temple remains plain void of any relief of decorations. But, there are intricate plant ornaments that adorn the outer part of the temple top. This is one of the many Yogyakarta temples that tourists visit by the hundreds every year.

Suggested Read: 10 Indonesia Travel Tips You Must Follow To Make Your Trip Memorable

Built around the same time as the famous Prambana Temple, the Plaosan complex is located in Bugisan village just a kilometer northwest of Prambanan. The complex comprises of two spectacular Buddhist temples the North and South Plaosan Temples. The complex occupies a whopping 2,000 square meters and sits about 150 meters above sea level. You will be greeted by spectacular views of rice fields that surround the temple. Unlike other temples, Plaosan complex boasts of two kinds of architecture. The temple is a beautiful blend of Buddhist and Hindu culture that is clear from the structure and shape of the temple. The top of the shrine is characteristic of Hindu worship places while the base of the temple is typical of a Buddhist structure. This Yogyakarta temple is never too crowded and a great place to spend a quiet afternoon.

Further Read: Indonesia Nightlife: 10 Places Where You Can Experience The Ultimate High & Party Till Dawn

These beautiful Yogyakarta temples are more than just stones. They have great historical significance and interesting folk tales associated with their names. Be sure to visit these temples on your next holiday to Indonesia.

17 Most Popular Temples In Bangalore To Visit For A Spiritual Retreat In 2020!

Visit These Temples In Puri For A Historical Tour Of This Pilgrimage Site In 2020!

21 Best Places To Visit In Warangal In 2020 That Prove It’s A Hidden Gem Down South!