5 Absolutely Enchanting Zurich Castles That You Must Head To 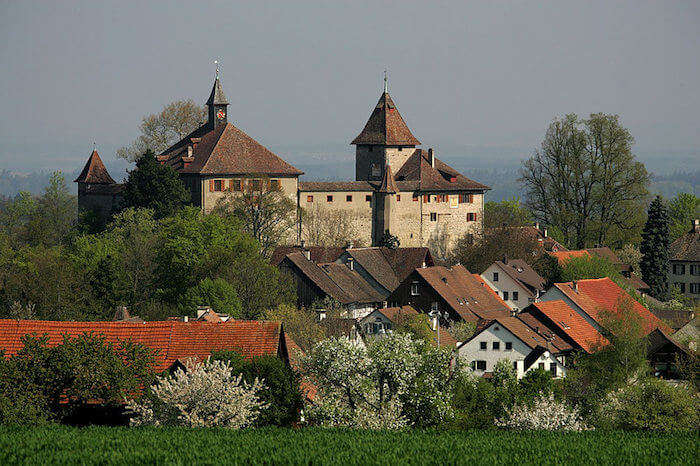 The greenery, beautiful pastures, and splendid mountain views are far from being the only things Zurich in Switzerland can offer. Yes, there are numerous beautiful castles in the city accessible to the public. Some of them, along with their addresses, opening hours and contact details are listed below. Prepare to be blown away by our curated list of 5 Zurich castles.

Castles in Zurich you must visit

Guests willing to educate themselves more about Zurich castles can do so with the help of this blog. Most of these castles are declared as Swiss heritage sites and are of national significance:

In the municipality of Regensburg can be found this ancient castle standing tall. Situated towards the north western side of Zurich, the Regensburg Castle has a privilege of being situated at somewhat an elevated Location at the Eastern foothills of Lagern ridge, linking Badern with the northern side of Zurich. This region in itself is characterized by the castle since as early as the 13th Century AD.

Must Read: 9 Best Homestays In Zurich For A Staycation Packed With Mesmerizing Views

This castle is considered to be the landmark of what is called the “City of Roses”, located on the Lake Zurich in Switzerland. The picturesque town around it helps bring in more tourism and ultimately, visitors to the castle. Built around the twilight years of the 12th Century, it was then renovated afterwards many times. The Rapperswil Castle is a popular attraction and can be observed from a distance.

Suggested Read: 10 Best Hostels In Zurich To Zip Up A Staycation In A Backpack

This castle is the living representation of more than a thousand years of European history. Still today, along with vividly representing the life and culture of people in the medieval ages, and their long forgotten traditions, it manages to hold the same old captivating atmosphere that it always did. As a centre of living history and cultural development, this castle has always inspired one and all who have paid a visit here.

The Kyburg Castle now turned into museum has won international awards for its pristine glory and it offering a rich variety of insights into the castle life for over 800 years now. Perched above the river Toss, it is one among Zurich’s most important castles, and now houses a lively and beautiful museum within its walls. Guests can look around the cellar, the torture chamber, the old creaking attic, or maybe sniff at spices.

Suggested Read: 10 Best Day Trips From Zurich For An Exhilarating 2021 Experience In The Swiss Alps!

Aarburg Castle is another and the last on this list of the five most famous Zurich castles, Switzerland. It is situated high on top of a rocky hill in the town of Aarburg. Built from the remains of a medieval castle back in the 12th Century AD, it was used to control the narrow points on the river Aare and simultaneously also was the seat of Aarburg Vogt. The Kantonale Jugendheim is housed within the walls of the Aarburg Castle.

Further Read: 15 Splendid Places To Visit In Zurich In 2021 While On A Swiss Vacation!

There you have it. The complete list to Zurich castles that are open to the public. Go modify your itinerary for your upcoming trip to Zurich, and be sure to give none of them a miss because they are sure to add that extra oomph factor to what is going to be the trip of your life. Take a trip to Switzerland at the earliest to visit these castles.

Austria In March: A Guide To Know About This Magnificent Country During Spring In 2022!