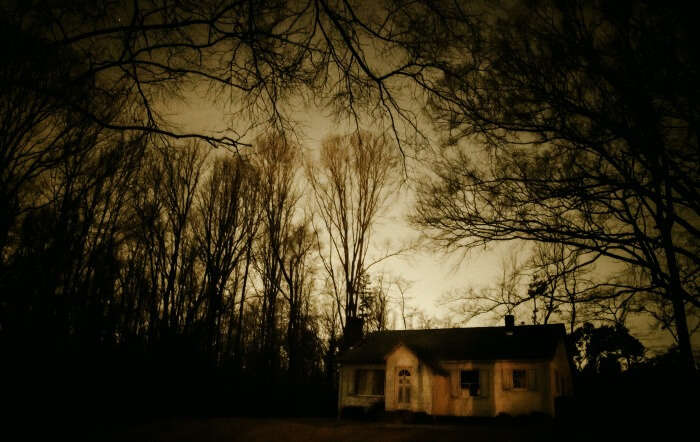 No city or state is spared when it comes to occurrences of paranormal activities, not even ‘God’s own country’. Kerala has its own share of spooky stories of mysterious places that will give you major goosebumps. And why not, history speaks for itself in this ancient region. So, if real ghost stories or experience of the supernatural intrigues you then get ready to unfold the fearsome dimensions of these 6 haunted places in Kerala!

Image Source
Located in the Wayanad district of Kerala, Lakkidi Gateway is the shortest route to cross over the Thamarassery pass. However, the discovery of this route is what has turned the gateway into one of the most haunted places in Kerala.

The Story: It is said that in colonial times, a British engineer took help from a person named Karinthandan to find Lakkidi and in order to attain the credit for finding the way himself, he killed Karinthandan. Later, many travelers passing the new route reported the wandering of the soul of Karinthandan. A priest was called and exorcism was performed to chain the doleful spirit to a tree. Amazingly, the chain has grown with the tree which people believe to be the soul that has not freed till now.

Spooky Occurrence: Trespassers have witnessed the frightening shrieks and scream at night.

Must Read: The Cursed Ghosts Of Bhangarh Fort – The Most Haunted Place In India

If real ghost stories are to be believed then, Bonacaud Bungalow is one of the most haunted houses in Kerala. After darkness falls, this ramshackle mansion becomes an absolute horrid place and thus, counted among the creepiest places in Kerala.

The Story: During British rule, the bungalow was famous for its sprawling tea plantations. It is said that on one fateful night the young children of the owner died under mysterious circumstances. After this incident, the couple went back to London.

Spooky Occurrence: People have reported the frequent wandering of a young spirit in the mansion. The sound of the breaking glass and screaming of a child can be heard during midnight. The apparition of the ghostly boy wandering in the air has also been claimed.

Trekking, camping, and taking a jungle safari are some of the popular things to do in Kerala. If you are a nature enthusiast and love trekking and camping then you must have heard of Trichur Forest in Kerala. It is a fun-filled spot but when the sun retires, the place paints itself into dark colors, turning into a dilapidated spot.

Spooky Occurrence: Those who come here for an adventurous experience have witnessed paranormal activities. The ghost of a seven-year-old boy who died in this forest is seen to be continuously staring in the blank but doesn’t harm anyone. The spirit disappears in the morning, leaving the place a paradise for backpackers.

Suggested Read: Kerala In June: Your Little Guide To A Perfect Monsoon Vacation In 2021

Housing the deity of Sree Ayyappa, the ancient temple of Sabarimala has numerous stories associated with it. Even though it’s debatable to call it the most haunted place in Kerala since it’s a highly revered temple, there have been some mysterious and supernatural incidents at this place.

The Story: Legend has it that once Lord Ayyappa defeated an evil creature here on the 14th of January.

Spooky Occurrence: Every year the evil spirit tries to enter the shrine on the same date and is defeated by Lord Ayyappa. The fight is ended with the defeat of the evil spirit and to mark it there is a flash in the sky which people claim to have seen.

The Kariavattom campus road is another haunted place in Kerala. It is said that there is a pond in its vicinity named after the girl who committed suicide in it, Hymavathi pond.

Spooky Occurrence: People have claimed to have seen the apparition of a ghost that is double the height of a normal person walking around on the road.

Suggested Read: Kerala Honeymoon Guide For Couples Looking To Spice Up Their Love Life In 2021

6. Perandoor Canal – For An Encounter With Ghost

Perandoor Canal is one of the most haunted places in Kerala and if you want to have an encounter with a ghost, you should visit it. The locals believe that this canal is haunted by the ghost of Mathai.

The Story: The legends state that Vadhuthala Mathai abused a woman and was hanged to death near this canal on the order of Lord Raja Edappally.

Spooky Occurrence: Locals have felt an evil presence at this Canal.

7. The Weeping Ghost In Kolam – Frightening Voice Of Child

What can be more scary than the weeping voice of the child in your new home? Well, this happened to a couple who shifted in a house in Kolam.  The frightening voice was getting louder each day until finally they called the priest who trapped the wandering soul. It is indeed one of the most haunted places in Kerala.

Morris bungalow is one of the most haunted places in Kerala. During the British rule in India, the luxurious mansion belonged to an Englishman, Morris is believed to have committed suicide after an argument with his father. The bungalow is known for abnormal activities since that time.

The Story: The luxurious bungalow is known to belong to Englishman, Morris who committed suicide after which the mansion is known for abnormal activities.

So, if you are a fan of paranormal activities, do steel your nerves and visit these haunted places in Kerala. So, think no more, pack your bags, plan your vacation in Kerala and get ready to spot a ghost! Also, if you have witnessed some otherworldly occurrences, then do share it with us in the comments below.

Will it be good idea to visit haunted places in Kerala?

The tourists are advised to take all the necessary precautions which are advised by the travel agency.

Which are some of the famous haunted places to visit in Kerala in 2021?

Lakkidi Gateway, Bonacaud Bungalow, Sabarimala Temple are considered to be some of the popular haunted places to visit in Kerala.

State some of the unusual real-life experiences in haunted places in Kerala?

In Lakkidi gateway, it is said that at night trespassers hear the strange sounds of frightening shrieks and screaming at night.

How can I reach Lakkidi?

In order to reach Lakkidi without any hassle, you must board a train that will take you to Kozhikode Railway Station. This railway station is located at a distance of 100 kilometers. From there, you can either take private or government bus or a taxi to reach the destination.

What is special about Thrissur?

The city of Thrissur (or Trichur) is known to be the cultural capital of Kerala. While the Trichur forest is believed to be haunted, the city is essentially known for its religious as well as cultural aspects. It is also famous for its intriguing history. This city used to be the capital of Cochin Kingdom.

Is Kerala a safe state of India?

Kerala is quite a safe destination in India. The beautiful natural setting of this state of India is indeed pleasing to the eyes. People from all over the world come to this place in huge numbers, as it is safe for families, friends, honeymooners, as well as solo travelers.

Is Fearful Bonacaud Bungalow the most haunted place in Kerala?

Yes, Fearful Bonacaud Bungalow is the most haunted place in Kerala.

Rivers In Kerala: A Pocket Guide To Add More Calming Vibes On Your 2021 Trip!

Experience Shopping In Calicut And Carry The Essence Of The City Back Home With You!

Visit These Sacred Temples In Guruvayur For A Wholesome Vacation In Kerala!