These 2 Airports In Bangkok Make Commute In This City Easy Breezy In 2022! 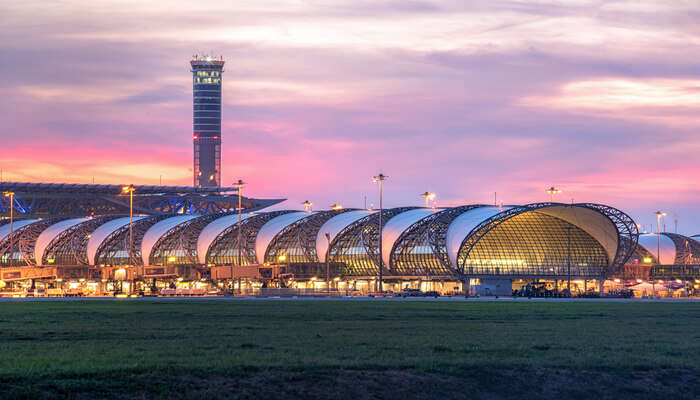 Let’s just say you are planning to visit a place. What is the first thing that you will consider? The commute? Right? So, let us just ease it out for you for one of the most happening Thailand cities, Bangkok. This very beautiful city which attracts endless number of visitors throughout the year and also happens to be the capital of Thailand can be reached through Suvarnabhumi International Airport which is the serving international airport in Bangkok. The other one of the two airports in Bangkok is city is Don Mueang International Airport which is now the hub for low cost airlines in Bangkok which is certainly recognised for the vibrant city life left alone the ornate shrines. There are several famous attractions such as Phra Kaew Temple, Wat Arun Temple and many others which are worth a visit. In this article, we will be talking about the airports here in Bangkok and some of their facilities and features below.

If you were wondering how many airports in Bangkok are there or where should you get down to reach your place of stay faster then here are your answers.

Image Source
Unofficially known as Bangkok Airport, the Suvarnabhumi International Airport
is one of the two international airports in Bangkok.This magnificent airport was inaugurated in 2006 and is known to be the largest airport which serves almost all international and a large number of domestic flights. As we all are aware that the city is known to be the world’s most famous and one of the favourite attractions hence considering the number of tourists visiting Bangkok, the said airport is also known to be the busiest airport in Thailand, let alone Asia. To include some of the major airlines which operate here are, British Airways, Qatar Airways, Singapore Airlines, Thai Airways, Delta Air Lines, Etihad Airways, Emirates, Air China, Japan, Bangkok Airways and Lufthansa. Well, speaking of the arrival zones, the airport is known to have one domestic and two international zone/arrival areas.

Must Read: Islands Near Bangkok That Will Let You Enjoy A Heavenly Vacay!

This is one of the two international airports in Bangkok and actually the really ‘important’ one. There is an airport rail link where a train is scheduled every fifteen minutes. It is considered to be the fastest and most convenient mode of transport and to add a small detail here, it approximately takes about 20 minutes to get into the city.

Compared to the above-mentioned mode of transport, travelling in a taxi can be expensive and there may also be an additional expressway toll cost. Nevertheless, it is a convenient mode of transport at any given hour of the day.

There are shuttle services where a bus will take you to the public bus transportation stop. Passengers can board a bus to the city from there and it takes around an hour with this transportation.

Other Facilities At Suvarnabhumi International Airport

There is a dedicated Vat office at the airport which is open 24/7 in the departure section which efficiently helps the passengers. Well, here in Bangkok if you have purchased goods which are worth 2000 BAHT or more then you do have the facility to claim VAT in exchange for the total given invoice and VAT refund application. Passengers can ask for any required assistance while completing this process.
There are efficient bank branches in the airport itself offering foreign currency exchange. There are several ATMs which can be accessed anytime you want. Right in Level 2 of the terminal at one of the important airports in Bangkok, there are free Cell phone SIM cards of some renowned telephone carriers where the passengers can make calls and access the internet at a lower cost comparatively.
This facility for renting a car at the airport is great. You need to have an international driving license to avail the car rental service. This service is available in Level 2 at the terminal.
As an add on feature, there is a hotel facility available at the airport itself. There are two hotels to be precise, starting with Novotel, which is known to be a luxurious hotel with beautifully organised and comes with decently spacious rooms equipped with all the high-end amenities like spa and swimming pool. The other hotel is called the Louis’ Tavern Transit Hotel which is comparatively smaller than the former and is resting in the international departure area right on the fourth floor.
Airport’s third and fourth floor is where you can find a variety of restaurants to dine and drink where you can choose from some delicious delicacies specially prepared by some of the finest cooks for their passengers. As an addon, there are some fast food joints located near the Airport Rail Link Station.

One of the international airports in Bangkok, the Suvarnabhumi International Airport lets you indulge in shopping too. We all have often tried transit browsing where we please ourselves by buying some gifts or commodities which attracts our eyes. There are several such shops available at the said airport let alone the massive duty-free store area known as the King Power Duty-Free. To name a few of the brands that you can choose from, we can start with stores like Bulgari, Swarovski, Hugo Boss and Cartier. There is the facility of buying liquor and alcohol at the duty-free shop which comes at a much lesser price comparatively. Right after the immigration section, there are some souvenir stores, accessory shops and pharmaceutical stores which can be accessed by everyone.

Image Source
After the opening of Suvarnabhumi International Airport, the oldest running airports in Bangkok, which goes by the name of Don Mueang International Airport was closed down for some time only to reopen soon after. Being smaller in size compared to Suvarnabhumi, it is still quite popular and has earned its name for once being the finest airport in the city. It is known to serve several international and domestic flights. Some of the airlines which operate here are Air Asia, Thai Lion Air and Nok Air. Respectively, many low-cost airlines fly into this airport and supposedly is said to have a large volume of domestic inflow of flights. To be more precise, about 15 airlines in total use this airport and its home to many private jets which are stationed here.

The airport rail link which is about 500 metres away from the airport is said to be the most convenient yet the cheapest mode of transport in this given day. To cover the distance from Don Muang Train Station to the City Centre Station called Hua Lamphong takes about an hour to reach. Passengers should be aware that these trains are usually crowded and travelling with luggage can be a discomfort for many if not all.

b) Taking a shuttle service is allowed and a bus to Mo Chit Skytrain Station hardly takes about 20 minutes to reach and from there you can take a train connecting to the Central Railway Station. It may cost up to 100 BAHT via bus.
c) As compared to the above mentioned two options, hiring a taxi can be much more expensive as the additional expressway costs will add up to the total fare. However, it’s the easiest mode of transport as you can directly head to your desired destination by avoiding any said hassle in between.

Other Facilities At Suvarnabhumi International Airport

There are enough ATMs for your convenience at one of the oldest airports in Bangkok. There are dedicated booths available for the currency exchange. The passengers can approach the kiosks which are available between terminal 7 to 11 and the airport authorities are always ready on toes to guide and assist further whenever required.
Car rental services are available here and the cars can be picked up directly from the arrival areas in the terminal itself provided you have an international driving license.
For shopping enthusiasts, the King Power duty-free shop is available here and there are notably a variety of shops too which are known to have all sorts of selling commodities intact for the buyers. Tobacco, wine and liquor can be brought from the duty-free shop at a lesser price comparatively if not standard.
There is an in-built hotel at this airport in Bangkok which goes by the name of Amari Don Muang Hotel and is well connected by an air-conditioned walkway. It is said to be a 4-star accommodation offering great rooms with all equipped with amenities such as a gym and a swimming pool to name a few.
The fast-food outlets like Burger King, Fuji, Starbucks and Subway are stationed right here in the airport’s terminal itself and are accessible at any given hour of the day.

These airports in Bangkok are renowned and well organised. The passengers will not have any difficulties or hassles while travelling through these airports as they are well maintained and are known to have amazing airport staff who are known for their great work, highly impactful assistance and remarkable hospitality leaving an amazing mark on the passengers’ experience in a very good manner. So, plan a trip to Bangkok and see what the hype is about.

What are the names of the airports in Bangkok?

How far is the city from the airport?

Are the airports known to serve domestic and international flights?

Yes, they are well known to serve the domestic as well as international flights.

What is the airport code?

Are there duty-free stores in the airport?

Yes, there are duty-free stores where the passengers can purchase what they need.

Are there in-house hotels?

Yes, there are in-house hotels for the convenience of the passengers.

9 Best Things To Do In Nonthaburi For A Thrilling Vacay!

Airport In Brisbane: Your Personal Guide To Know More About The Stunning Airport!

Bangkok vs Pattaya: A Bet For A Better Nightlife

Bang Khun Phrom Palace: All That You Must Know About This Architectural Masterpiece