Airports In Singapore: 4 Popular Airports In The Country That You Must Know About 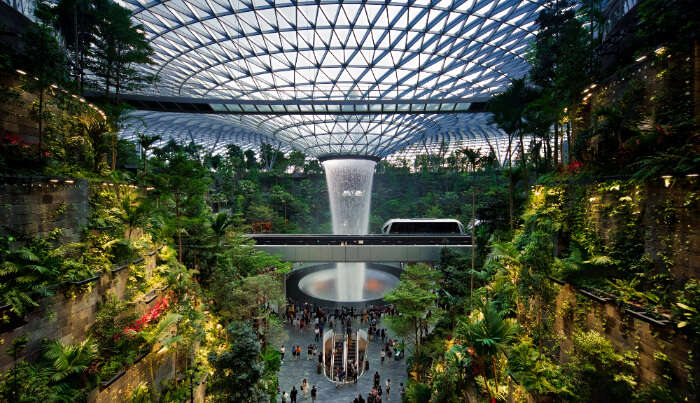 Here are the top 4 airports in Singapore that are functional:

Singapore Changi Airport, commonly known as Changi Airport (IATA: SIN, ICAO: WSSS)is a major civilian airport that serves Singapore and is one of the largest transportation hubs in Asia. It is currently rated the World’s Best Airport by Skytrax for the seventh consecutive year since 2013. It is also the first Airport in the world to do so for seven consecutive years and is one of the world’s busiest airport by international passenger and cargo traffic. The airport is located in Changi, at the eastern end of Singapore, approximately 20 kilometers northeast from Marina Bay (Singapore’s Downtown Core). The airport is operated by Changi Airport Group and it is the home base of Singapore Airlines, Singapore Airlines Cargo, SilkAir, Scoot, Jetstar Asia Airways and BOC Aviation.

Must Read: Singapore In September: Weather, Festivals, And Interesting Encounters

Seletar Airport is a military airport located at Seletar, in the northeastern region of Singapore, and is managed by the Changi Airport Group. Originally, the airport was completed in 1928 as a flying Royal Air Force station (RAF Seletar) and was also Singapore’s first international airport. It is approximately 16 kilometres away from Singapore Changi Airport and about 20 kilometres away from the city-centre. There had been a proposal to extend its runway to 2,000 metres (6,600 ft), so as to be able to receive the Boeing 737 used by many budget airlines. However, after consideration by the Singapore Government and the CAAS, they decided to build a Budget (LCC) Terminal in Singapore Changi Airport instead.

Suggested Read: 5 Things To Do In Toa Payoh Central With Family On A Singapore Vacation In 2019

Paya Lebar Air Base (PLAB) is a military airbase of the Republic of Singapore Air Force located at Paya Lebar, in the central-eastern part of Singapore, the airbase goes by the motto of “Strength Through Readiness”. Originally built in 1954 as Singapore International Airport to replace Kallang Airport, control of the airport was transferred to RSAF in 1980 when it was renamed Paya Lebar Air Base, following the relocation of the civilian airport to Changi.

Suggested Read: Places To Visit Near Changi Airport To Kick-Start Your Visit To Singapore In 2019

The Kallang Airport, also known as the Kallang Aerodrome, Kallang Airfield and RAF Kallang was the first purpose-built civil international airport in Singapore, opened officially on 12 June 1937 and ceased operations in 1955. Situated on the eastern shore of the Kallang Basin, the Kallang Airport spanned the modern planning areas of Kallang and Geylang at its greatest extent. The conserved complex, including the airport’s terminal building, is located wholly within Kallang.

Further Read: 6 Top Chinatown Food Delicacies Without Which Your Vacation In Singapore Is Incomplete

Plan a trip to Singapore and fly to this amazing island nation. You will be landing at Changi Airport if you are traveling from India. This is one of the biggest and most spectacular airports in the world. So make sure you explore it well.

Q. How many airports are there in Singapore?

A. There are two airports in Singapore – the Changi International Airport and Seletar Airport. Nearly 7,400 flights land and depart from these two airports. Singapore’s airports are synonymous with quality service and unparalleled passenger experience.

Q. Which is the main airport in Singapore?

A. Singapore Changi Airport, also called the Changi Airport (IATA: SIN, ICAO: WSSS), is known to be one of the biggest transportation hubs in all of Asia.

Q. Why is Changi Airport the best airport in the world?

A. Exceptional passenger experiences, dedicated airport workers, and best airport leisure amenities have made Singapore’s Changi Airport the best airport in the world. In 2019, Changi Airport was known as the World’s Best Airport for the seventh consecutive year voted by air travelers. Changi has received the Best Airport Award for the 10th time in the 20-year history of the World Airport Awards.

Q. Is Singapore airport the biggest in the world?

Q. Which is the cleanest airport in the world?

Q. What is the cheapest month to fly to Singapore?

Top 35 Romantic Things To Do In Singapore For Couples In 2021!