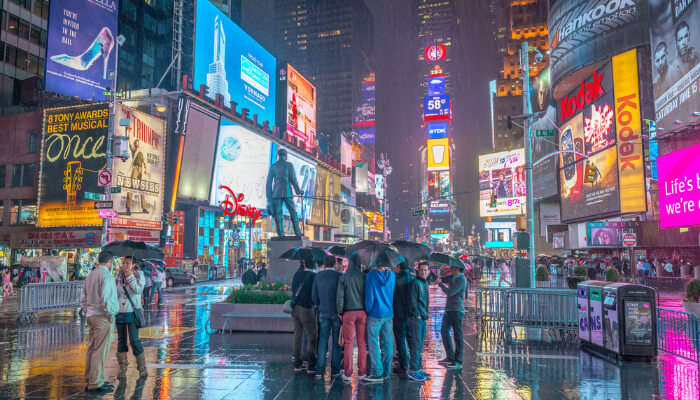 New York is, without a doubt, one of the most fabulous cities in the world. There are so many things to do and places to see here than one lifetime isn’t enough for all of them. It’s a whirlwind of experiences and attractions. From Broadway, Statue of Liberty, Empire State Building, Rockefeller Center, Central Park, to the massive Brooklyn Bridge, this city has something exciting to offer at every turn. And the best part – you can experience all this and more in any season you visit. That’s right! Be it summer, winter, or monsoon in New York, you’ll find a plethora of options for thrill and excitement in this delightful city.

The best time to visit New York City is ideally from April to June and from September to early November when the weather is nice and sunny. However, you’ll find the city choked with tourists from all around the world during this time. So, we suggest you visit in the monsoon season when the weather is warm and pleasant and there are fewer travelers in the city.

Why To Visit During Monsoon In New York

The rainy season in New York usually starts in the month of April and goes on till June. While the temperature is usually around 11 degree Celsius in April on an average, it starts rising gradually in May with frequent showers. The average temperature in May remains around 17 degree Celsius. The weather is between cold and hot, so you’ll need to carry a light jacket, and of course, an umbrella or raincoat!

Here are some of the main reasons to witness monsoon in New York city:

Must Read: Top Cruises In New York To Visit For A Romantic Time With Your Loved Ones

How To Reach New York From India

New York manages over a hundred air carriers from around the world every day, including American Airlines, Delta, JetBlue, and United. You can land at any of the major international airports here, like the John F. Kennedy International Airport (JFK), LaGuardia Airport (LGA), or the Newark Liberty International Airport (EWR). From here, you can either hail a cab, take the metro, or travel through the airport’s shuttle buses to get wherever you want to go in New York.

Things To Do In Monsoon In New York

Let us tell you about all the best places to visit in monsoon in New York so that you can construct your itinerary accordingly and plan your trip with ease.

Imagine indulging in a number of exciting activities like boating, ice-skating, picnicking, and birdwatching amidst fresh foliage and a sweet petrichor. That’s exactly what New York’s Central Park will offer you in the monsoon season. It’s among the most iconic places to visit in New York, especially during the rainy season. While here, you can also visit the Victorian Gardens Amusement Park in the south end where you (and your young ones!) can get to enjoy a number of rides, live shows, as well as great food.

Suggested Read: 10 Amazing Places For Hiking Near New York: Get Your Hiking And Camping Gear Ready!

If you think Coney Island is just for kids, you’re totally wrong! No matter what you age is, you can always head to Coney Island for a bit of fun and explore the thrilling amusement park and its rides. From the Cyclone in Luna Park to the Wonder Wheel in Deno’s Wonder Wheel Amusement Park, there’s no end to the exciting attractions and rides you can enjoy here to relive your childhood! You can also witness some mind blowing fireworks if you visit on a Friday evening.

Remember that ferry disaster in the movie Spiderman Homecoming where Iron Man flew in to save the day? No, he’s not coming around when you’re riding on the actual Staten Island ferry, but it is still going to be one hell of an experience to sail on this delightful boat to Staten Island. While the ferry ride is surely going to be awesome and will offer unmatched views of the city’s skyline, you will also end up having loads of fun on the island itself. This island is in fact a great place to visit in monsoon in New York when it’s all fresh and vivid.

Suggested Read: 7 New York Museums To Get A Glimpse Into The Art, Science, And History Of The City

Watching a show on Broadway is probably on every artist and theatre lover’s bucket list, so you better not miss out on this experience when you’re in New York. It’s essentially the pinnacle of theatre all over the world and witnessing performers act out classic and contemporary plays here is something you wouldn’t want to miss. Some of the most popular plays that have been performed here include Harry Potter and the Cursed Child, The Lion King, My Fair Lady, The Phantom of the Opera, Les Misérables, and Aladdin and Kinky Boots.

5. Statue Of Liberty – Take A Tour

The gorgeous and gigantic Statue Of Liberty is perhaps one of the best things to see in monsoon in New York, or any season for that matter. Your trip to this wonderful city is incomplete if you do not take a tour of this iconic structure dominating the skyline of New York. if you wish to see this massive monument in all its glory, make sure you buy tickets for the pedestal or the crown since the grounds-only option is not going to give you access to the monument. And you also need to ensure that you buy your tickets way months in advance (if you’re visiting in the peak season) since they are limited.

Further Read: Shopping In New York 2022: Shop Till You Drop At The Most Popular City Of The States!

So, which of these exciting experiences are you going to try out first during monsoon in New York? Make sure you do not miss out on any of these during your holiday in the US so that you can enjoy the essence of this season in this beautiful city to the fullest. And once you’re back, let us know about your exciting holiday experience!

What is the best time of year to visit New York City?

From April to June and from September to early November is the best time to plan your visit to New York. The weather is warm & pleasant. However, the cheapest time to visit is from mid-January to February end. If you are traveling along, you can take solo trips to New York to make it more memorable.

Does it rain a lot in New York?

On an average, New York, gets 47 inches of rain every year.

What are the two wettest months in New York?

July is the wettest month in New York. One can expect around 4.5 inches of rain during this month.

Does it rain often in New York?

On an average, New York has 224 sunny days in a year. It gets precipitation in the form of rain, sleet, snow or hail for around 119 days a year, approximately.

Does it rain in New York in January?

January is the coldest month in New York City. Though there are sunny days during this month, one can expect it to rain or snow most of the times. It is thus advisable to carry an umbrella and snow boots when visiting New York in January.

Does it rain a lot in New York in October?

October, on an average, is the driest month in New York and witnesses a minimal rainfall of about 94mm in precipitation. It rains for only 10 days in the month of October and the rains are mostly experienced during late afternoons. The average humidity is about 65% during this month.

Which is the coldest month in New York?

January is the coldest month with the temperature varying from −9.7OC to -21.7OC. The lowest temperature recorded in the month of January was -33O C.

What are the seasons in New York?

Winter, Spring, Summer and Fall are the four seasons one can experience in New York and most places in the United States.