9 Serene Beaches In Argentina Ideal For An Exotic Travel Experience 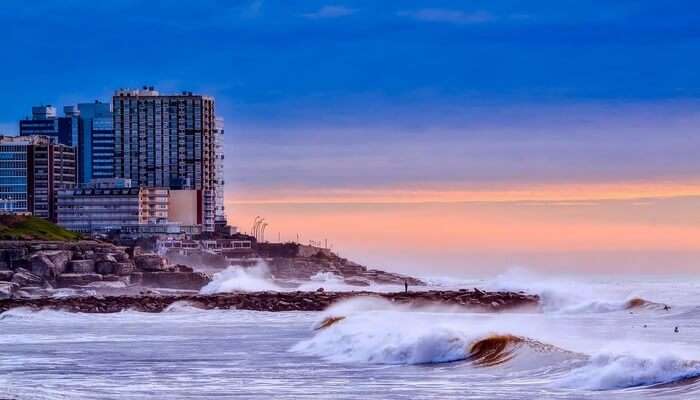 Located in the southern part of Latin America, Argentina is a nature’s paradise in the Atlantic Coast. The beaches here are a haven for the whale watchers and those seeking a peaceful moment amidst nature. Almost all beaches in Argentina are famous globally for their pristine white sands.

With almost 5,000 km of coastline, and breathtaking lakes, rivers, and streams, Argentina will leave you all surprised as well as rejuvenated. Indeed, the beaches of this beautiful country account for the majority of tourists from different regions of the world.

Listed below are the 9 top beaches in Argentina that are believed to mesmerise tourists as well as locals. Full of shops, cafes, and lots of music, you’ll get a glimpse of the vibrant culture of Argentina

Located in the province of Buenos Aires, the Capital Territory of Argentina, it is one of the most popular beaches where millions of tourists swarm throughout the year. It is one of the most eclectic beaches in Argentina during the summer months. Playa Bristol is one of the beaches along the Mar Del Plata region, which is popular by the name the Happy city.

How to Reach: You can get from Buenos Aires to Playa Bristol by plane, bus, train, taxi or car
Attractions: Snorkeling with friendly sea lions, SUP and kayaking

Must Read: 10 Magnificent Places To Visit In Argentina To Explore The Best Of This Modern Metropolis!

Puerto Madryn is a quaint breach city in the Chubut province in Patagonia. It is located along the Atlantic Ocean Gulf, Golfo Nuevo, which is known for its abundant marine life, and serves as a gateway to the nearby Valdés Peninsula.

How to Reach: It is three and a half hours away by flight from Buenos Aires with usual fares averaging INR 15,000/-. If travelling by bus, it is a 20-hours journey and the fares are approximately INR 3,500/-
Stay Options: Different ranges of hotels from INR 3,000/- to INR 8,000/- per night tariff are available here
Attractions: Windsurfing, kayaking, and canoeing

Suggested Read: Best Trips For 2021: Pick Your Favorite, Pack Your Bags, And Head Right Out!

A 6 mile-long beachfront, Villa Gesell Beach is known for its soft sands, a wide variety of spas, and amenities that travellers can avail without any hassle. It is one of the loveliest beaches in Argentina and thus worth visiting. It is a charming seaside village in Argentina’s Buenos Aires Province that seek the attention of all.

How to Reach: There are 5 ways to get from Buenos Aires to Villa Gesell by bus, train, car, plane, or taxi. Flights are available from Buenos Aires to the Jorge Newbery Airport from where you can take a taxi to Villa Gesell. Alternatively, cheaper options like bus or trains are also available and can be preferred.
Attractions: Walking in the sand, relaxing and rejuvenating at Spa or indulging in the fun water sports activities.

Suggested Read: 10 Best Honeymoon Destinations In November In The World For A Romantic Escape In 2021

One of the most popular and famous beaches in Argentina, Mar De Ajo is flocked by a large number of visitors every day. Strategically located on the Atlantic Coast tip of the Buenos Aires province, Mar de Ajo is an eclectic Seaside town that has turned into a popular summer tourist destination nowadays. Along with it’s beachfront, visitors can view the shipwrecks at the city’s “ship graveyard”.

How to Reach: There are different ways to get from Buenos Aires to Mar de Ajó by bus, train, taxi or car. While a bus journey takes about 5 hours and costs around INR 1,750/-, drive-by taxis will take you there in under 4 hours but might cost around INR 8,000/-.
Attractions: Cinemas, arcades, pizza parlors, and a casino.

Located along the Atlantic Ocean coastline in the southern section of the Buenos Aires Province, the beach at the city of Mar Del Plata is one of the ideal beaches in Argentina for couples. Though a small city with less its than 700,000 population, Mar Del Plata beach attracts nearly 7 million tourists every year.

How to Reach: You can get from Buenos Aires to Mar del Plata by plane, bus, train, taxi or car. While you can reach here in 3 hours by flight at a cost of approximately INR 10,000/-, a bus, car or train journey may take anywhere between 4 to 6 hours at a cost of around INR 1,000/- to INR 8,000/-.
Attractions: Juan Carlos Castagnino Municipal Art Museum, the Aqua Sol Waterpark, and a large concentration of wineries and microbreweries.

It is a famous beach in Argentina, located in the southern region of the Buenos Aires province. The speciality of this beach is the visibility of both Sunrise and Sunset above the waters. With temperate weather prevailing all through the year, it is one of the best beaches in Argentina that attracts tourists from worldwide locations, irrespective of the seasons throughout the year.

How to Reach: There are 6 ways to get from Buenos Aires to Monte Hermoso by plane, taxi, bus, train or car. While the plane travel will cost you upwards of INR 12,000/-, bus or train journey or taxi ride will take about 8 hours and might cost between INR 2,000/- to INR 8,000/-.
Attractions: Beach volleyball, sailing, jet-skiing, and windsurfing.

Suggested Read: 12 Things To Do In Rome: Voyage To This Historic City For A Memorable Vacation

Along the Atlantic Coast, between Mar del Plata and Buenos Aires, are smaller resort beaches that tend to attract the locals as well as international travellers. Pinamar is one of such cheap beaches in Argentina that seek the attention of everybody. This quaint seaside place is thickly forested with the pine trees and is also a favourite gateway for a reclusive day.

How to Reach: There are 3 ways to get from Buenos Aires to Pinamar by bus, train or car. Located at a distance of 250 km from Buenos Aires, this place can be covered in 5 hours by road.
Attractions: Windsurfing, wakeboarding, jet skiing, shark fishing, and motorboat riding.

Suggested Read: 7 Places To Visit In Paraguay To Spruce Up Your South American Holiday In 2021

Considered one of the best beaches in Argentina, Las Gutas is close to San Antonio Oeste along Argentina’s southern coastline area. Due to its uniquely warm climate, both of the sea and in it, tourists flock this beach throughout the year.

How to Reach: You can reach Las Grutas from Buenos Aires by plane, bus, train or car
Attractions: swimming, kitesurfing, and shore fishing. During February, several beauty pageants and bikini festivals are hosted here

This exclusive beach of choice of the politicians, impresarios and celebrities is located along Argentina’s Atlantic Ocean coastline. Undoubtedly billed as the top beach in Argentina, less than 500 families reside in this region during the offseason. The fancy houses and lovely gardens attract who-s-who of the political, business and tinsel world from across the world to this beach resort.

How to Reach: There are 4 ways to get from Cariló to Buenos Aires by bus, train, car or plane
Attractions: Swimming, four-wheel driving on sand dunes, hiking and photography

Argentina’ uniqueness lies in its varied number of beaches. Beaches in Argentina make for the ideal spots that’ll give you a fair idea of the cultural setup. Make the most of your Argentina holiday while basking in the sun and sipping on coolers.

Q. What is the best time to visit the beaches in Argentina?

A. The best time to visit the beaches in Argentina is from February to May and September to November. However, some beaches are frequented throughout the year owing to their warm and pleasant temperatures all through the year.

Q. Are beaches in Argentina safe for tourists?

A. Heavily crowded, most of the beaches in Argentina have very little security issues for the tourists.

Q. What is the official language of Argentina?

A. Spanish is the national language of Argentina and is spoken extensively across Argentina. Good chunk of people speak English to communicate with the travellers.

Q. Any special precautions to be taken when visiting beaches of Argentina?

A. Nothing special but normal care and diligence are paramount while you are visiting a beach in any part of the world. Tourists with known health complaints such as chronic back pain, heart or.

Visit Kingdom Of Dreams In 2021 For a Dazzling Affair With Music, Arts & Theatre

10 Tempting Water Sports In Japan To Kindle Your Soul