A Guide To Bibi Ka Maqbara: The Replica Of Taj Mahal 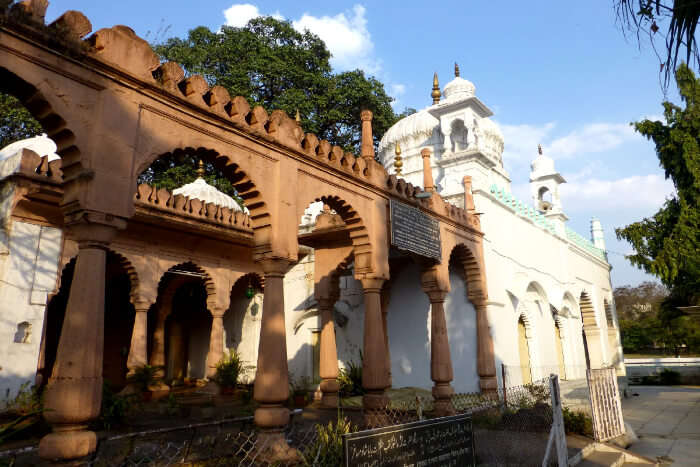 The ‘Tomb of the Lady’, known as Bibi Ka Maqbara was built by Aurangzeb in Aurangabad as a memorial of his wife Rabia-Ul-Daurani alias Dilras Banu Begum. Having a noticeable resemblance to Taj Mahal, the mausoleum is a very popular attraction structured amidst the beautiful mountain ranges. This Taj Mahal of the Deccan was built in 1661 with intend to emulate the Taj Mahal, however, the similarity in architecture and proportions ensued in the copied form of the Taj.

Bibi ka Maqbara was built in the memory of the first wife of Aurangzeb, Dilras Banu Begum who was the daughter of Mirza Badi-uz-Zaman Safavi. She married Aurangzeb in the year 1637 and is believed to be the favourite wife of the emperor. She died after giving birth to her fifth child, Sultan Muhammad Akbar. The disconsolate emperor commissioned the construction of the mausoleum after three years.
The tomb was designed by Ataullah and engineered by Hanspat Rai. It was constructed between 1651 and 1661 AD with a cost of 6.6 lakhs.

Bibi Ka Maqbara was built on the basis of Mughal architecture and comprises of the garden, tomb and mausoleum. Following are the details of the architecture of the place:

Garden: Alike other Mughal monuments, the garden is divided into four parts called the Charbagh. This garden enhances the beauty of the site with its symmetry and layout. The garden is accessed with many water channels and the fountain in the southern part of the garden, is the main attraction here.

Enclosure Walls: The monument has been placed at the centre of enclosed walls. The pillared pavilions of the walls called baradaris are located in the east, north, and west portion of the wall.

Entrance Gate: The entrance gate lies in the southern part of the mausoleum and its exterior is covered with wood and brass plates. Another entrance in the west was closed due to the construction of the mosque. This mosque was built by Nizam of Hyderabad.

Grave: The grave of Dilras Banu Begum is in the chamber below the ground level. One needs to take the staircase to go to the grave. Its surrounded with jalis made up of marble.

Must Read: 20 Historical Places In Delhi To Explore In 2022 For A Walk Through Time

There are numerous places nearby Bibi ka Maqbara that attracts travellers. The most prominent destination among them are:

Goga Baba Hills, a panoramic beauty amidst the dense forest surrounding Aurangabad is a must-visit location near Bibi Ka Maqbara. People visit this place to experience the mesmerizing sunsets. There is a small temple at the footsteps of the hill. Wanderers climb the hill and enjoy the pleasant weather here. Another temple at the top of the hill gives entirely mystic ambience.

Suggested Read: 20 Road Trips From Mumbai That Must Be On Every Traveler’s Bucket List In 2022

Situated between Satara and Sihyachal mountain ranges, Aurangabad caves houses various temples built between the sixth and eighth centuries. Most of the shrines in these temples are based on Buddhist architecture. One of the most popular shrines here is based on Sutosama Jataka. The home of Ajanta and Ellora caves, i.e. Aurangabad attracts numerous wanderers with its enormous caves.

Situated on a 600 feet high hill, Daulatabad Fort is one of the most powerful forts in India. Daulatabad was earlier known as Devagiri but was later renamed during the reign of Muhammad bin Tughluq. Daulatabad Fort is the historical triangular fort that was built by the first king of Yadava Dynasty, Bhillama V. in the year 1187.

Suggested Read: 7 Super Luxury Trains In India That Are Worth Spending A Fortune In 2022

It was built during the medieval period to generate energy from water. Panchakki was built by Turktaz Khan in 1695 AD. Later, Jamil Beg Khan added a reservoir and fountain to the site. The place also houses a dargah of Baba Shah Musafir. Panchakki attracts numerous visitors as it showcases a unique way of using hydro energy.

Jama Masjid Aurangabad was constructed by Aurangazeb in 1612. Later, the construction was concluded by Malik Amber after he captured the city. The mosque is located near Killa Arrak. The architecture of this mosque is one of its kind and attracts history lovers to this place throughout the year.

Bibi ka Maqbara welcomes tourists throughout the year. However, Aurangabad enjoys pleasant weather in winters, planning a visit between October to March will enhance the traveller’s experience here. If you are planning a visit in Summers then keep yourself hydrated and carry light clothes. Do remember to pack your sunscreen and hat before heading for your destination.

The nearest airport to Aurangabad is Chikkalthana airport which is nearly 10 km away from the city. The airport welcomes regular flights from Mumbai, Udaipur, Jaipur and Delhi. Usually, travellers prefer to take a flight to Aurangabad and hire a bus to Bibi Ka Maqbara.

Aurangabad Railway Station is well-connected to all the major cities across the country.

Aurangabad bus terminal is located on Jalgaon road, opposite Lemon Tree Hotel. One can catch a bus to major cities of Maharashtra such as Mumbai, Pune, Nagpur, etc.

One can easily wander around in this city through autorickshaws and local buses. There are numerous agencies in the city which provides taxi for a fixed period of time.

Suggested Read: 30 Forts In Maharashtra That Will Let You Experience Its Rich Heritage In 2022

Aurangabad, a city that welcomes thousands of tourists every year as the place is surrounded by numerous historical monuments and UNESCO World Heritage Sites esp. Ajanta & Ellora caves, Bibi ka Maqbara, Daulatab Fort and many other illuminating sites that exhibit the exemplar of the ancient and medieval epoch. Plan a trip to Aurangabad with TravelTriangle and enjoy an electrifying holiday in the city called tourism capital of Maharashtra!