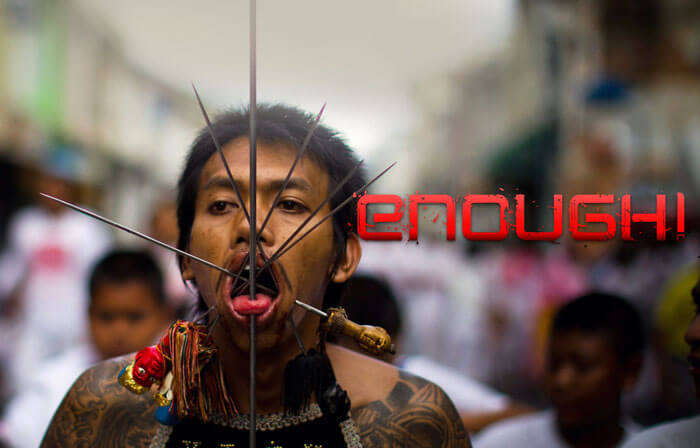 Since we have already shared a buck load of info about the regular festivals being celebrated across India, we decided to go wacky and weird this time. On a family or a couple vacation, our holiday itineraries often include selected festive celebrations of a country or a state. But what if the festival is embarrassing, or worse disgusting? We’d stick to feeble adjectives, though.

Tell us if you know a festival that involves devouring upon delectable testicles or throwing fireballs on each other. Well, there are things more weird, wackier and crazier and future forbid, some of these events can actually harm the participants to death — precisely why the title says what it says.

What is it: As the name suggests, it is actually a balls eating competition. And it tops our list of most bizarre festivals of the world. Called an ode to the man anatomy, this festival celebrated by The Rock Creek Lodge is about eating delicious animal gonads within 4 minutes while competing with other participants. The festival also includes a tricycle race. What about it? The participants are required to wear nothing but undies and the race is called Undies 500.

Travel Tip: If in Montana in August, stay away from Rock Creek Lodge.

Seriously guys, an ode? Ode to the human balls? Like you couldn’t find something better for such a grand ode?

What is it: It is actually a parade – the ultimate parade of the Japanese Joystick. Kanamara Matsuri means iron Phallus and the festival is a celebration of longevity of marriage, fertility, healthy birth, and prevention of STDs including AIDS. The tradition dates back to 600 years where the local prostitutes would pray at the Shinto Shrine for their wellbeing and prevention from STDs.

Weirdness Quotient: Parading a Penis, that too to a shrine — Oh dear God! And the festival is about penis. Inspite of a serious connect in the history, you wouldn’t be disappointed for the parade has all manifestations of human phallus – penis hats/caps, penis floats, penis lollipops, penis puppets, and penis costumes. And remember, everybody from a family is a part of parade.

Travel Tip: If Kawaski was one of stops for your April vacation in 2021 to Japan with family, drop it now!

Urghhhh! That’s hypocrisy. A country that blurs out the original ones in its videos, actually goes around in the streets with a 6 ft iron version of it.

What is it: If the name and the image of the festival make you curious and excited, you can be forgiven for such brutal excitement as the event is hosted by the land of bizarre festivals – Spain. Families with newborns congregate in a ground, babies are laid on the ground, and grown men dressed as evils jump over the kids. It is supposed to cleanse the baby of all the evils. The festival dates back to early 17th century and it is believed that anyone who has not received this cleansing lives with the burden of evil all through his/her life.

Weirdness quotient: Well, this is exorcism at its best. Adults clad in red and yellow, donning whips and truncheons, hop over babies in their acrobatic acts.

Travel Tip: You don’t want your babies to even see that. So ensure Castillo is never a holiday spot for you in June 2021 at least.

Careful guys, the event might look funny but on the darker side, it has killed as many as thousand babies in last 50 years.

What is it: It is perfectly fine if you’re caught between the caption and the image. This, ladies and gentlemen, is extremely opposite of the title. In a bid to self immolate for the nine gods, the participants practice abstinence for 9 days. The process of purgation includes prohibition of all forms(from non veg food to sex) and piercing of body parts with spears, knives and metal rods.

Weirdness quotient: The festivals was started in one of the most ha-ha moments of Chinese community in Thailand. The legends suggest that the community suddenly felt that they have failed to honor their gods and hence they need to sacrifice in order to save themselves from the wrath of Gods.

Travel Tip: Though Thailand, otherwise is a beauty, refrain from visiting Thailand during the 9-day festival. The 2016 version is from 30th September to 8th October.

Enough! What the hell man?

What is it: Fun filled three days of special events, food, carnival, rides, craft, cooking contest, rides, games, and much more on the last Thursday, Friday and Saturday every July.

Weirdness quotient: This is legendary! So the myths have it that the king of Mosquitoes – Willie-Man-Chew, with the finest of blood lines(:p) was looking for his dreamland when he found this piece of land at Clute where hundreds of fellow civilians were having a gala spring in the greenery and bushes. He quickly decided to call it his adobe. Hence, in a bid to embark the celebrations, he called upon some of his goodwill ambassadors, called them his SWAT team and embarked upon the preparations of the first annual festival of the land.

Travel Tip: If lame fests don’t irk you, well, you might attend this one. June is the time when you should plan!

So, even the mosquitoes have a name in the history books and legends. The land of blood sucking nuisance actually embraced upon its dubious distinction. Anything and anyone in the name of festivity!

Where: Yamaji Ji temple in Shimotsu-cho; Wakayama (contest in October); Ikiko shrine in Kanuma-ski, Hirado (contest in February); Tochigi (contest in September); and at Saimyoji temple.

What is it: Konaki means crying. So this fest is about crying Sumo(s). In this 400 years old tradition organized by Japanese temples, two Sumo wrestlers face each other with a baby in their hands. The competition is decided by the baby who cries first. If both the babies cry at the same time, the one crying louder is declared winner.

Weirdness quotient: The craze does not stop with the crying babies. There is a priest specially present to yell and make faces and wave arms to prompt the babies to cry.

Poor babies! So heartless of you Sumo(s) !

What is it: The people of Najapa gather in the town square and hurl fireballs at each other. Two teams, with proper cover accessories and war paint, are cheered by bystanders while they engage in a dummy fight in a manifestation of war between the evil and San Jeronimo in 1922.

Weirdness quotient: The craze was okay till paint ball, tomatoes and water balloons. Fireballs? That too in the face on the point blank?

Travel Tip: While this weird event might excite you, it could be dangerous to be a spectator. Plan only if you really want to see it, but we seriously suggest it’s time we do away with fests that put life at risk.

However the safety equipments are used, quite a lot of injuries have been reported.

What is it: A semi naked parade near Saidaiji Temple, this festival in Japan involves around 10,000 men dresses in Japanese loincloths. The participants battle for grabbing the pair of talisman thrown by the Priest into the crowd.

Weirdness quotient: The participants are required to bring slips with their name, blood group, and emergency contact number tucked to their loincloths.

Travel Tip: By now we don’t need to tell you that Japan with kids is a big NO!

Trust me, the visuals of thousands of naked men in crazy frames do not appeal to the eyes.

What is it: Now this one is outworldly. It is actually a conference attended by some ‘serious’ UFOlogist to discuss and share everything from abduction, rare sighting to a crop circle.

Weirdness quotient: So this is a commemoration of a flying disk crash of 1947 in Roswell. The entire city dresses in Reynold Wrap and gathers to witness events like UFO Light Parade, conferences, and fancy dress competitions.

Travel Tip: Not too genuine, but you attend this one! Head to Mexico in July to be a part.

Ideally, this should not have been on the list but, at-least it should catch up with the standards of a comic con.

Where: Cañete – South of Lima, Peru

What is it: If it’s not clear, it is not the food for dog/cat but the other way around. The cats are served as main course following the popular belief is that cat meat is a brilliant aphrodisiac and a health supplement otherwise.

Weirdness quotient: Around 50 cats are prepared and consumed for the occasion.

Travel Tip: Being a vegetarian, the mere sight of this fest will give you nausea! Avoid at all costs.

Too much in the name of balancing ecosystem and food chain. The Dog eating fest has been called off. Time to …

10 Local Dishes To Try Around The World This Christmas